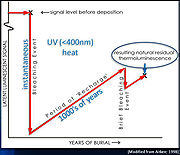 Thermoluminescence is a form of luminescence
Luminescence
Luminescence is emission of light by a substance not resulting from heat; it is thus a form of cold body radiation. It can be caused by chemical reactions, electrical energy, subatomic motions, or stress on a crystal. This distinguishes luminescence from incandescence, which is light emitted by a...
that is exhibited by certain crystalline materials, such as some minerals, when previously absorbed energy from electromagnetic radiation
Electromagnetic radiation
Electromagnetic radiation is a form of energy that exhibits wave-like behavior as it travels through space...
or other ionizing radiation
Ionizing radiation
Ionizing radiation is radiation composed of particles that individually have sufficient energy to remove an electron from an atom or molecule. This ionization produces free radicals, which are atoms or molecules containing unpaired electrons...
is re-emitted as light upon heating of the material. The phenomenon is distinct from that of black body
Black body
A black body is an idealized physical body that absorbs all incident electromagnetic radiation. Because of this perfect absorptivity at all wavelengths, a black body is also the best possible emitter of thermal radiation, which it radiates incandescently in a characteristic, continuous spectrum...
radiation.

High energy radiation creates electronic excited state
Excited state
Excitation is an elevation in energy level above an arbitrary baseline energy state. In physics there is a specific technical definition for energy level which is often associated with an atom being excited to an excited state....
s in crystalline materials. In some materials, these states are trapped, or arrested, for extended periods of time by localized defects, or imperfections, in the lattice interrupting the normal intermolecular or inter-atomic interactions in the crystal lattice. Quantum-mechanically, these states are stationary state
Stationary state
In quantum mechanics, a stationary state is an eigenvector of the Hamiltonian, implying the probability density associated with the wavefunction is independent of time . This corresponds to a quantum state with a single definite energy...
s which have no formal time dependence; however, they are not stable energetically. Heating the material enables the trapped states to interact with phonon
Phonon
In physics, a phonon is a collective excitation in a periodic, elastic arrangement of atoms or molecules in condensed matter, such as solids and some liquids...
s, i.e. lattice vibrations, to rapidly decay into lower-energy states, causing the emission of photon
Photon
In physics, a photon is an elementary particle, the quantum of the electromagnetic interaction and the basic unit of light and all other forms of electromagnetic radiation. It is also the force carrier for the electromagnetic force...
s in the process.

The amount of luminescence is proportional to the original dose of radiation received. In thermoluminescence dating
Thermoluminescence dating
Thermoluminescence dating is the determination, by means of measuring the accumulated radiation dose, of the time elapsed since material containing crystalline minerals was either heated or exposed to sunlight...
, this can be used to date buried objects that have been heated in the past, since the ionizing dose received from radioactive elements in the soil or from cosmic ray
Cosmic ray
Cosmic rays are energetic charged subatomic particles, originating from outer space. They may produce secondary particles that penetrate the Earth's atmosphere and surface. The term ray is historical as cosmic rays were thought to be electromagnetic radiation...
s is proportional to age. This phenomenon has been applied in the thermoluminescent dosimeter
Thermoluminescent Dosimeter
A thermoluminescent dosimeter, or TLD, is a type of radiation dosimeter. A TLD measures ionizing radiation exposure by measuring the amount of visible light emitted from a crystal in the detector when the crystal is heated. The amount of light emitted is dependent upon the radiation exposure...
, a device to measure the radiation dose received by a chip of suitable material that is carried by a person or placed with an object.

Thermoluminescence is a common geochronology
Geochronology
Geochronology is the science of determining the age of rocks, fossils, and sediments, within a certain degree of uncertainty inherent to the method used. A variety of dating methods are used by geologists to achieve this, and schemes of classification and terminology have been proposed...
tool for dating pottery
Pottery
Pottery is the material from which the potteryware is made, of which major types include earthenware, stoneware and porcelain. The place where such wares are made is also called a pottery . Pottery also refers to the art or craft of the potter or the manufacture of pottery...
or other fired archeological materials, as heat empties or resets the thermoluminescent signature of the material (Figure 1). Subsequent recharging of this material from ambient radiation can then be empirically dated by the equation:

This technique was modified for use as a passive sand migration analysis tool.(Figure 2). The research shows direct consequences resulting from the improper replenishment of starving beaches using fine sands. Beach nourishment
Beach nourishment
Beach nourishment— also referred to as beach replenishment—describes a process by which sediment lost through longshore drift or erosion is replaced from sources outside of the eroding beach...
is a problem worldwide and receives large amounts of attention due to the millions of dollars spent yearly in order to keep beaches beautified for tourists, e.g., in Waikiki, Hawaii. Sands with sizes 90-150 μm (very fine sand) were found to migrate from the swash zone 67% faster than sand grains of 150-212 μm (fine sand; Figure 3). Furthermore, the technique was shown to provide a passive method of policing sand replenishment and a passive method of observing riverine or other sand inputs along shorelines (Figure 4).