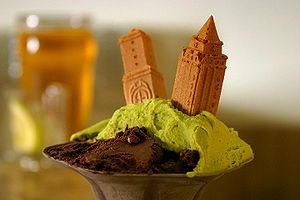 Gelato is the italian word for ice cream
Ice cream
Ice cream is a frozen dessert usually made from dairy products, such as milk and cream, and often combined with fruits or other ingredients and flavours. Most varieties contain sugar, although some are made with other sweeteners...
and sorbet. Italians use the word gelato to mean a sweet treat that is served frozen. Indeed, gelato, just like ice cream, is made with Milk
Milk
Milk is a white liquid produced by the mammary glands of mammals. It is the primary source of nutrition for young mammals before they are able to digest other types of food. Early-lactation milk contains colostrum, which carries the mother's antibodies to the baby and can reduce the risk of many...
, cream
Cream
Cream is a dairy product that is composed of the higher-butterfat layer skimmed from the top of milk before homogenization. In un-homogenized milk, over time, the lighter fat rises to the top. In the industrial production of cream this process is accelerated by using centrifuges called "separators"...
, various sugars, flavoring including fresh fruit and nut
Nut (fruit)
A nut is a hard-shelled fruit of some plants having an indehiscent seed. While a wide variety of dried seeds and fruits are called nuts in English, only a certain number of them are considered by biologists to be true nuts...
puree
Purée
Purée and mash are general terms for cooked food, usually vegetables or legumes, that have been ground, pressed, blended, and/or sieved to the consistency of a soft creamy paste or thick liquid. Purées of specific foods are often known by specific names, e.g., mashed potatoes or apple sauce...
s.

The ambiguity about the use of the word gelato happens with the spread of many gelaterie ( store where gelato is made). It is correct to say that most gelato is different from the traditional recipe of ice cream because it is lighter having a lower butterfat
Butterfat
Butterfat or milkfat is the fatty portion of milk. Milk and cream are often sold according to the amount of butterfat they contain.- Composition :The fatty acids of butterfat are typically composed as follows :...
content than traditional, factory made ice cream. The home made Gelato typically contains 4–8% butterfat, versus 14% for ice cream in the United States. Depending on recipes and the artisan making it, dairy based gelato contains 16–24% sugar. Most ice cream in the United States contains 12-16% sugar. The sugar content in home made gelato just like in traditional ice cream, is precisely balanced with the water content to act as an anti-freeze to prevent it from freezing solid. Types of sugar used include sucrose, dextrose, and invert sugar to control apparent sweetness. Typically, gelato like any other ice cream need a stabilizing base. Egg yolk
Egg yolk
An egg yolk is a part of an egg which feeds the developing embryo. The egg yolk is suspended in the egg white by one or two spiral bands of tissue called the chalazae...
s are used in yellow custard
Custard
Custard is a variety of culinary preparations based on a cooked mixture of milk or cream and egg yolk. Depending on how much egg or thickener is used, custard may vary in consistency from a thin pouring sauce , to a thick pastry cream used to fill éclairs. The most common custards are used as...
-based gelato flavors, including zabaione and creme caramel. Non-fat milk solids are also added to gelato to stabilize the base.

Making gelato is essentially the same thing as making home made ice cream. The mixture for gelato is typically prepared using a hot process first, where the sugars need to dissolve. White base is heated to 85 °C (185 °F) completing a pasteurization program. The hot process to make chocolate home made gelato is essentially the same for conventional ice cream, and depending on recipes, it is meant to be traditionally flavored with cocoa powder and cocoa butter.

Yellow custard base, which contains egg yolks, is heated to 65 °C (149 °F). It is recommended that the gelato mix age for several hours after pasteurization is complete for the milk proteins to hydrate, or bind, with water in the mix. This hydration reduces the size of the ice crystals, making a smoother texture in the final product. A non-traditional cold mix process is popular among some gelato makers in the United States and in the world.

Unlike most commercial ice creams in the world, from a process point of view, the home made gelato is frozen very quickly in individual small batches while the conventional factory made ice cream is frozen with a continuous assembly line freezer. This is the main difference between conventional ice cream and the home made one, called gelato. Churning during the freezing process incorporates air into the mix making it lighter. The added air is called overrun. Unlike commercial ice cream made in factories, which contains up to 100% overrun, the overrun in home made gelato is low, generally 20–35%. The gelato lower overrun results in a more expensive product per liter for the producer. This creates a denser product and with more intense flavors.

Like the conventional ice cream, with a higher fat content, gelato can be stored in a freezer for months.It is observed that artisan gelato holds its peak flavor and smooth texture only for several days, only when it is stored carefully at consistent, low temperatures.

The history of gelato dates back to frozen desserts served in ancient Rome
Ancient Rome
Ancient Rome was a thriving civilization that grew on the Italian Peninsula as early as the 8th century BC. Located along the Mediterranean Sea and centered on the city of Rome, it expanded to one of the largest empires in the ancient world....
and Egypt
Egypt
Egypt , officially the Arab Republic of Egypt, Arabic: , is a country mainly in North Africa, with the Sinai Peninsula forming a land bridge in Southwest Asia. Egypt is thus a transcontinental country, and a major power in Africa, the Mediterranean Basin, the Middle East and the Muslim world...
made from ice and snow brought down from mountaintops and preserved below ground. Later, frozen desserts appeared during banquets at the Medici
Medici
The House of Medici or Famiglia de' Medici was a political dynasty, banking family and later royal house that first began to gather prominence under Cosimo de' Medici in the Republic of Florence during the late 14th century. The family originated in the Mugello region of the Tuscan countryside,...
court in Florence
Florence
Florence is the capital city of the Italian region of Tuscany and of the province of Florence. It is the most populous city in Tuscany, with approximately 370,000 inhabitants, expanding to over 1.5 million in the metropolitan area....
. In fact, the Florentine cook Bernardo Buontalenti
Bernardo Buontalenti
Bernardo Buontalenti, byname of Bernardo Delle Girandole was an Italian stage designer, architect, theatrical designer, military engineer and artist.-Biography:Buontalenti was born in Florence....
is said to have invented modern ice cream in 1565, as he presented his recipe and his innovative refrigerating techniques to Catherine de' Medici
Catherine de' Medici
Catherine de' Medici was an Italian noblewoman who was Queen consort of France from 1547 until 1559, as the wife of King Henry II of France....
. She in turn brought the novelty to France, where in 1686 the Sicilian fisherman Francesco Procopio dei Coltelli perfected the first ice cream machine.
The popularity of gelato among larger shares of the population however only increased in the 1920s–1930s in the northern Italian city of Varese
Varese
Varese is a town and comune in north-western Lombardy, northern Italy, 55 km north of Milan.It is the capital of the Province of Varese. The hinterland or urban part of the city is called Varesotto.- Geography :...
, where the first mobile gelato cart was developed. Italy is the only country in the world where the market share of handmade gelato versus industrial one is over 55%. Nowadays over 5.000 italian gelaterie all over the world occupy more than 15.000 gelatai. 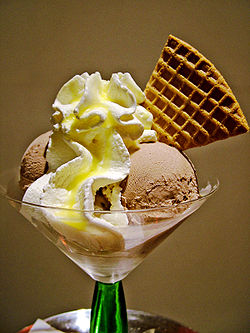 Gelato is typically flavored with fresh fruit purees, cocoa and/or nut pastes. If other ingredients such as chocolate flakes, nuts, small confections
Confectionery
Confectionery is the set of food items that are rich in sugar, any one or type of which is called a confection. Modern usage may include substances rich in artificial sweeteners as well...
, cookie
Cookie
In the United States and Canada, a cookie is a small, flat, baked treat, usually containing fat, flour, eggs and sugar. In most English-speaking countries outside North America, the most common word for this is biscuit; in many regions both terms are used, while in others the two words have...
s, or biscuits are added, they are added after the gelato is frozen. Gelato made with fresh fruit, sugar, and water and without dairy ingredients is sorbet. Use of the word sorbetto is a common affectation in the United States.