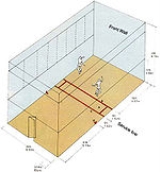 Encyclopedia
Gaelic handball is a sport
Sport
A Sport is all forms of physical activity which, through casual or organised participation, aim to use, maintain or improve physical fitness and provide entertainment to participants. Sport may be competitive, where a winner or winners can be identified by objective means, and may require a degree...
similar to Basque pelota, racquetball
Racquetball
For other sports often called "paddleball", see Paddleball .Racquetball is a racquet sport played with a hollow rubber ball in an indoor or outdoor court...
, squash
Squash (sport)
Squash is a high-speed racquet sport played by two players in a four-walled court with a small, hollow rubber ball...
and American handball
American handball
American handball is a sport in which players hit a small rubber ball against a wall using their hands.- History :...
(an almost identical game). It is one of the four Gaelic games
Gaelic games
Gaelic games are sports played in Ireland under the auspices of the Gaelic Athletic Association. The two main games are Gaelic football and hurling...
organised by the Gaelic Athletic Association
Gaelic Athletic Association
The Gaelic Athletic Association is an amateur Irish and international cultural and sporting organisation focused primarily on promoting Gaelic games, which include the traditional Irish sports of hurling, camogie, Gaelic football, handball and rounders...
(GAA). The game may be played with two (singles) or four players (doubles) and the players hit the ball with a hand or fist against a wall in such a way as to make a shot the opposition cannot return. In 2009, Irish Handball was rebranded as GAA Handball
GAA Handball
GAA Handball Ireland is the governing body for the sport of handball. Its headquarters is located in Croke Park, Dublin....
.

A smaller alley was also introduced, measuring 12.2 m by 6.1 m (40 feet by 20 feet) with a front wall
Wall
A wall is a usually solid structure that defines and sometimes protects an area. Most commonly, a wall delineates a building and supports its superstructure, separates space in buildings into rooms, or protects or delineates a space in the open air...
6.1 m (20 ft) high. The first alley of this size was built in Ireland in 1969. This smaller size is now the standard in the international version of the game, but both alleys are still used in the Gaelic game, with two separate championships ran by the GAA
Gaelic Athletic Association
The Gaelic Athletic Association is an amateur Irish and international cultural and sporting organisation focused primarily on promoting Gaelic games, which include the traditional Irish sports of hurling, camogie, Gaelic football, handball and rounders...
in the two codes.

The objective of a game is to score a set total of points before your opponent does. Points are only scored by the person serving the ball. In other words, if a player wins a rally but did not serve at the start of that rally they only win the right to serve, and thus the chance to score after a subsequent rally. The serving player has two opportunities to hit the ball, from the "service area" (between the two parallel lines), off the "front wall" and across the "short line" (which is located exactly half-way down the court from the front wall).

Players take turns at hitting the ball off the "front wall" before the ball bounces twice following their opponent's previous shot. Most handball games take place in a four-walled court but there are also three-walled and one-wall versions of the game.

Handball-like games have originated in several places at different times. Hieroglyph
Egyptian hieroglyphs
Egyptian hieroglyphs were a formal writing system used by the ancient Egyptians that combined logographic and alphabetic elements. Egyptians used cursive hieroglyphs for religious literature on papyrus and wood...
s in the temple of Osiris
Osiris
Osiris is an Egyptian god, usually identified as the god of the afterlife, the underworld and the dead. He is classically depicted as a green-skinned man with a pharaoh's beard, partially mummy-wrapped at the legs, wearing a distinctive crown with two large ostrich feathers at either side, and...
in Egypt
Egypt
Egypt , officially the Arab Republic of Egypt, Arabic: , is a country mainly in North Africa, with the Sinai Peninsula forming a land bridge in Southwest Asia. Egypt is thus a transcontinental country, and a major power in Africa, the Mediterranean Basin, the Middle East and the Muslim world...
portray priest
Priest
A priest is a person authorized to perform the sacred rites of a religion, especially as a mediatory agent between humans and deities. They also have the authority or power to administer religious rites; in particular, rites of sacrifice to, and propitiation of, a deity or deities...
s taking part in a game very similar to handball. Mesoamerica
Mesoamerica
Mesoamerica is a region and culture area in the Americas, extending approximately from central Mexico to Belize, Guatemala, El Salvador, Honduras, Nicaragua, and Costa Rica, within which a number of pre-Columbian societies flourished before the Spanish colonization of the Americas in the 15th and...
n civilizations in South
South America
South America is a continent situated in the Western Hemisphere, mostly in the Southern Hemisphere, with a relatively small portion in the Northern Hemisphere. The continent is also considered a subcontinent of the Americas. It is bordered on the west by the Pacific Ocean and on the north and east...
and Central America
Central America
Central America is the central geographic region of the Americas. It is the southernmost, isthmian portion of the North American continent, which connects with South America on the southeast. When considered part of the unified continental model, it is considered a subcontinent...
had a form of handball-like game
Mesoamerican ballgame
The Mesoamerican ballgame or Tlatchtli in Náhuatl was a sport with ritual associations played since 1,000 B.C. by the pre-Columbian peoples of Ancient Mexico and Central America...
, which was a large part of pre-Columbian
Pre-Columbian
The pre-Columbian era incorporates all period subdivisions in the history and prehistory of the Americas before the appearance of significant European influences on the American continents, spanning the time of the original settlement in the Upper Paleolithic period to European colonization during...
culture.

The first recorded game of striking a ball with a hand against a wall was in Scotland in 1427, when it was recorded that King James I ordered a cellar window in his palace courtyard blocked up, as it was interfering with his game. In Ireland, the earliest written record of a similar ball game is contained in the town statute
Statute
A statute is a formal written enactment of a legislative authority that governs a state, city, or county. Typically, statutes command or prohibit something, or declare policy. The word is often used to distinguish law made by legislative bodies from case law, decided by courts, and regulations...
s of Galway
Galway
Galway or City of Galway is a city in County Galway, Republic of Ireland. It is the sixth largest and the fastest-growing city in Ireland. It is also the third largest city within the Republic and the only city in the Province of Connacht. Located on the west coast of Ireland, it sits on the...
in 1527, which forbade the playing of ball games [generic] against the walls of the town. The first depiction of an Irish form of handball does not appear till 1785. On the west coast of Ireland, Galway had many trading links with Spain
Spain
Spain , officially the Kingdom of Spain languages]] under the European Charter for Regional or Minority Languages. In each of these, Spain's official name is as follows:;;;;;;), is a country and member state of the European Union located in southwestern Europe on the Iberian Peninsula...
, especially the Basque
Basque Country (autonomous community)
The Basque Country is an autonomous community of northern Spain. It includes the Basque provinces of Álava, Biscay and Gipuzkoa, also called Historical Territories....
regions, where the similar game of pelota is played.
The rules are simple. All you have to do is hit the ball with or without fulls (depends on location).

Both Scottish and Irish immigrants brought the game to many countries in the 18th, 19th and 20th centuries. It is still played in the United States
United States
The United States of America is a federal constitutional republic comprising fifty states and a federal district...
, Canada
Canada
Canada is a North American country consisting of ten provinces and three territories. Located in the northern part of the continent, it extends from the Atlantic Ocean in the east to the Pacific Ocean in the west, and northward into the Arctic Ocean...
, Mexico
Mexico
The United Mexican States , commonly known as Mexico , is a federal constitutional republic in North America. It is bordered on the north by the United States; on the south and west by the Pacific Ocean; on the southeast by Guatemala, Belize, and the Caribbean Sea; and on the east by the Gulf of...
, Australia
Australia
Australia , officially the Commonwealth of Australia, is a country in the Southern Hemisphere comprising the mainland of the Australian continent, the island of Tasmania, and numerous smaller islands in the Indian and Pacific Oceans. It is the world's sixth-largest country by total area...
, New Zealand
New Zealand
New Zealand is an island country in the south-western Pacific Ocean comprising two main landmasses and numerous smaller islands. The country is situated some east of Australia across the Tasman Sea, and roughly south of the Pacific island nations of New Caledonia, Fiji, and Tonga...
, South Africa
South Africa
The Republic of South Africa is a country in southern Africa. Located at the southern tip of Africa, it is divided into nine provinces, with of coastline on the Atlantic and Indian oceans...
, Wales
Wales
Wales is a country that is part of the United Kingdom and the island of Great Britain, bordered by England to its east and the Atlantic Ocean and Irish Sea to its west. It has a population of three million, and a total area of 20,779 km²...
, Africa
Africa
Africa is the world's second largest and second most populous continent, after Asia. At about 30.2 million km² including adjacent islands, it covers 6% of the Earth's total surface area and 20.4% of the total land area...
and England
England
England is a country that is part of the United Kingdom. It shares land borders with Scotland to the north and Wales to the west; the Irish Sea is to the north west, the Celtic Sea to the south west, with the North Sea to the east and the English Channel to the south separating it from continental...
.

In Ireland, there are four main types of handball. There is 40x20 (small court), the traditional 60x30 Softball & Hardball (big alley) and One-wall handball. One-wall handball has gotten very popular over the past 3 years and it is the most popular version of international handball. It is played in over 35 countries and it is hoped that it will become an Olympic sport soon.