Encyclopedia
Gadidae is a family of marine fish, included in the order Gadiformes
Gadiformes
Gadiformes is an order of ray-finned fish, also called the Anacanthini, that includes the cod and its allies. Many major food fish are in this order. They are found in marine waters throughout the world, and there are also a small number of freshwater species.Common characteristics include the...
. It includes the cod
Cod
Cod is the common name for genus Gadus, belonging to the family Gadidae, and is also used in the common name for various other fishes. Cod is a popular food with a mild flavor, low fat content and a dense, flaky white flesh. Cod livers are processed to make cod liver oil, an important source of...
, haddock
Haddock
The haddock , also known as the offshore hake, is a marine fish distributed on both sides of the North Atlantic. Haddock is a popular food fish and is widely fished commercially....
, whiting
Merlangius merlangus
Merlangius merlangus, commonly known as whiting is an important food fish in the eastern North Atlantic, northern Mediterranean, western Baltic, and Black Sea...
, and pollock
Pollock
Pollock is the common name used for either of the two species of marine fish in the Pollachius genus. Both P. pollachius and P. virens are commonly referred to as pollock. Other names for P...
.

Most species of gadid are found in temperate waters of the northern hemisphere, although there are some exceptions. They are generally medium sized fish, and are distinguished by the presence of three dorsal fin
Dorsal fin
A dorsal fin is a fin located on the backs of various unrelated marine and freshwater vertebrates, including most fishes, marine mammals , and the ichthyosaurs...
s on the back and two anal fins on the underside. Most species have barbel
Barbel (anatomy)
A barbel on a fish is a slender, whiskerlike tactile organ near the mouth. Fish that have barbels include the catfish, the carp, the goatfish, sturgeon, the zebrafish and some species of shark...
s on their chin, which they use while browsing on the sea floor. Gadids are carnivorous, feeding on smaller fish and crustacean
Crustacean
Crustaceans form a very large group of arthropods, usually treated as a subphylum, which includes such familiar animals as crabs, lobsters, crayfish, shrimp, krill and barnacles. The 50,000 described species range in size from Stygotantulus stocki at , to the Japanese spider crab with a leg span...
s.

Gadids are highly prolific, producing several million eggs at each spawning. This contributes to their high population numbers, which, in turn, makes commercial fishing relatively easy.

The family gadidae includes 24 species, grouped into 13 genera. Some other forms once included here have since been removed to other families. On the other hand, the tadpole cod family Ranicipitidae has now been absorbed into Gadidae, having formerly contained just one species, the tadpole fish (Raniceps raninus). 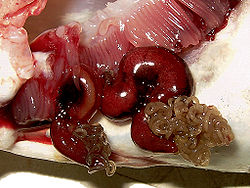 Cod and related species are plagued by parasites. For example the cod worm, Lernaeocera branchialis, starts life as a copepod
Copepod
Copepods are a group of small crustaceans found in the sea and nearly every freshwater habitat. Some species are planktonic , some are benthic , and some continental species may live in limno-terrestrial habitats and other wet terrestrial places, such as swamps, under leaf fall in wet forests,...
, a small free-swimming crustacean larva
Larva
A larva is a distinct juvenile form many animals undergo before metamorphosis into adults. Animals with indirect development such as insects, amphibians, or cnidarians typically have a larval phase of their life cycle...
. The first host used by cod worm is a flatfish
Flatfish
The flatfish are an order of ray-finned fish, also called the Heterosomata, sometimes classified as a suborder of Perciformes. In many species, both eyes lie on one side of the head, one or the other migrating through and around the head during development...
or lumpsucker
Lumpsucker
Lumpsuckers or lumpfish are mostly small scorpaeniform marine fish of the family Cyclopteridae. They are found in the cold waters of the Arctic, North Atlantic, and North Pacific oceans...
, which they capture with grasping hooks at the front of their body. They penetrate the lumpsucker with a thin filament which they use to suck its blood. The nourished cod worms then mate on the lumpsucker.

The female worm, with her now fertilized eggs, then finds a cod, or a cod-like fish such as a haddock
Haddock
The haddock , also known as the offshore hake, is a marine fish distributed on both sides of the North Atlantic. Haddock is a popular food fish and is widely fished commercially....
or whiting. There the worm clings to the gill
Gill
A gill is a respiratory organ found in many aquatic organisms that extracts dissolved oxygen from water, afterward excreting carbon dioxide. The gills of some species such as hermit crabs have adapted to allow respiration on land provided they are kept moist...
s while it metamorphoses into a plump, sinusoidal, wormlike body, with a coiled mass of egg strings at the rear. The front part of the worms body penetrates the body of the cod until it enters the rear bulb of the host's heart
Heart
The heart is a myogenic muscular organ found in all animals with a circulatory system , that is responsible for pumping blood throughout the blood vessels by repeated, rhythmic contractions...
. There, firmly rooted in the cod's circulatory system, the front part of the parasite develops like the branches of a tree, reaching into the main artery
Artery
Arteries are blood vessels that carry blood away from the heart. This blood is normally oxygenated, exceptions made for the pulmonary and umbilical arteries....
. In this way, the worm extracts nutrients from the cod's blood, remaining safely tucked beneath the cod's gill cover until it releases a new generation of offspring into the water.
The source of this article is wikipedia, the free encyclopedia.  The text of this article is licensed under the GFDL.