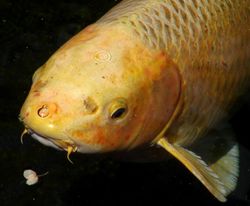 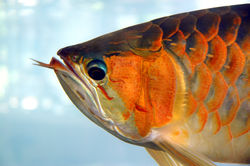 A barbel on a fish
Fish
Fish are a paraphyletic group of organisms that consist of all gill-bearing aquatic vertebrate animals that lack limbs with digits. Included in this definition are the living hagfish, lampreys, and cartilaginous and bony fish, as well as various extinct related groups...
is a slender, whiskerlike tactile organ
Organ (anatomy)
In biology, an organ is a collection of tissues joined in structural unit to serve a common function. Usually there is a main tissue and sporadic tissues . The main tissue is the one that is unique for the specific organ. For example, main tissue in the heart is the myocardium, while sporadic are...
near the mouth
Mouth
The mouth is the first portion of the alimentary canal that receives food andsaliva. The oral mucosa is the mucous membrane epithelium lining the inside of the mouth....
. Fish that have barbels include the catfish
Catfish
Catfishes are a diverse group of ray-finned fish. Named for their prominent barbels, which resemble a cat's whiskers, catfish range in size and behavior from the heaviest and longest, the Mekong giant catfish from Southeast Asia and the second longest, the wels catfish of Eurasia, to detritivores...
, the carp
Carp
Carp are various species of oily freshwater fish of the family Cyprinidae, a very large group of fish native to Europe and Asia. The cypriniformes are traditionally grouped with the Characiformes, Siluriformes and Gymnotiformes to create the superorder Ostariophysi, since these groups have certain...
, the goatfish
Goatfish
Goatfishes are tropical marine perciform fish of the family Mullidae. Seldom found in brackish waters, goatfish are most associated with the reefs of the Atlantic, Indian, and Pacific Oceans...
, sturgeon
Sturgeon
Sturgeon is the common name used for some 26 species of fish in the family Acipenseridae, including the genera Acipenser, Huso, Scaphirhynchus and Pseudoscaphirhynchus. The term includes over 20 species commonly referred to as sturgeon and several closely related species that have distinct common...
, the zebrafish (Danio rerio) and some species of shark
Shark
Sharks are a type of fish with a full cartilaginous skeleton and a highly streamlined body. The earliest known sharks date from more than 420 million years ago....
. They house the taste bud
Taste bud
Taste buds contain the receptors for taste. They are located around the small structures on the upper surface of the tongue, soft palate, upper esophagus and epiglottis, which are called papillae. These structures are involved in detecting the five elements of taste perception: salty, sour,...
s of such fish and are used to search for food
Food
Food is any substance consumed to provide nutritional support for the body. It is usually of plant or animal origin, and contains essential nutrients, such as carbohydrates, fats, proteins, vitamins, or minerals...
in murky water.

Barbels are often erroneously referred to as barbs, which are found in bird feathers for flight.

Barbels may be located in a variety of places. Maxillary barbels refer to barbels on either side of the mouth. Barbels may also be nasal, or extended from the nostril
Nostril
A nostril is one of the two channels of the nose, from the point where they bifurcate to the external opening. In birds and mammals, they contain branched bones or cartilages called turbinates, whose function is to warm air on inhalation and remove moisture on exhalation...
s. Also, barbels are often mandibular or mental, or located on the chin
Chin
In the human anatomy, the chin is the lowermost part of the face.It is formed by the lower front of the mandible.People show a wide variety of chin structures. See Cleft chin....
.

Barbel are frequently featured in the fishing magazine Angler's Mail as well as many other fishing publications . 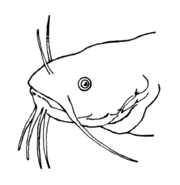