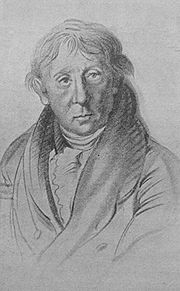 Friedrich Wilhelm von Reden (23 March 1752 – 3 July 1815) was a German pioneer in mining
Mining
Mining is the extraction of valuable minerals or other geological materials from the earth, from an ore body, vein or seam. The term also includes the removal of soil. Materials recovered by mining include base metals, precious metals, iron, uranium, coal, diamonds, limestone, oil shale, rock...
and metallurgy
Metallurgy
Metallurgy is a domain of materials science that studies the physical and chemical behavior of metallic elements, their intermetallic compounds, and their mixtures, which are called alloys. It is also the technology of metals: the way in which science is applied to their practical use...
. He was born in Hamelin
Hamelin
Hamelin is a town on the river Weser in Lower Saxony, Germany. It is the capital of the district of Hamelin-Pyrmont and has a population of 58,696 ....
in the Electorate of Hanover
Electorate of Hanover
The Electorate of Brunswick-Lüneburg was the ninth Electorate of the Holy Roman Empire of the German Nation...
and died in Michelsdorf
Miszkowice
Miszkowice is a village in the administrative district of Gmina Lubawka, within Kamienna Góra County, Lower Silesian Voivodeship, in south-western Poland. Prior to 1945 it was in Germany. It lies approximately west of Lubawka, south-west of Kamienna Góra, and south-west of the regional capital...
in Prussian
Kingdom of Prussia
The Kingdom of Prussia was a German kingdom from 1701 to 1918. Until the defeat of Germany in World War I, it comprised almost two-thirds of the area of the German Empire...
Silesia
Province of Silesia
The Province of Silesia was a province of the Kingdom of Prussia from 1815 to 1919.-Geography:The territory comprised the bulk of the former Bohemian crown land of Silesia and the County of Kladsko, which King Frederick the Great had conquered from the Austrian Habsburg Monarchy in the 18th...
. 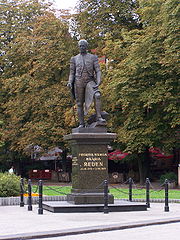 Reden came from the noble family of Reden (nobility): mining was hereditary. He was the nephew of the Hanover's mountain captain Claus Friedrich von Reden as well as the reformer of the Prussian Mining and Metallurgy, Friedrich Anton von Heynitz. His cousin was the lead American mountain captain Friedrich Otto Burchard von Reden.

Reden in 1768 began an internship at various mines of the Oberharz
Oberharz
Oberharz is a Samtgemeinde in the district of Goslar, in Lower Saxony, Germany. It is situated in the western part of the Harz, approx. 15 km southwest of Goslar. Its seat is in the town Clausthal-Zellerfeld....
. Between 1770 and 1773 Reden studied in Göttingen
Göttingen
Göttingen is a university town in Lower Saxony, Germany. It is the capital of the district of Göttingen. The Leine river runs through the town. In 2006 the population was 129,686.-General information:...
and Halle (Saale). After passing the state exams as an administrative officer, he traveled through Holland, England and France, to local mines and metallurgical plants. At the Bergakademie Freiberg, he took a degree in mineralogy
Mineralogy
Mineralogy is the study of chemistry, crystal structure, and physical properties of minerals. Specific studies within mineralogy include the processes of mineral origin and formation, classification of minerals, their geographical distribution, as well as their utilization.-History:Early writing...
and geology
Geology
Geology is the science comprising the study of solid Earth, the rocks of which it is composed, and the processes by which it evolves. Geology gives insight into the history of the Earth, as it provides the primary evidence for plate tectonics, the evolutionary history of life, and past climates...
from Abraham Gottlob Werner
Abraham Gottlob Werner
Abraham Gottlob Werner , was a German geologist who set out an early theory about the stratification of the Earth's crust and coined the word Neptunism...
. In 1777, he entered the Hanoverian civil service, and was soon appointed by Friedrich Anton von Heynitz to Berlin, in the Department of Mines.

In the late 18th century, Reden played an important role in the development of industry in Silesia
Silesia
Silesia is a historical region of Central Europe located mostly in Poland, with smaller parts also in the Czech Republic, and Germany.Silesia is rich in mineral and natural resources, and includes several important industrial areas. Silesia's largest city and historical capital is Wrocław...
. For example, on Reden's initiative, in 1787 one of the first steam-powered pumps in continental Europe was installed in a Tarnowitz (Tarnowskie Góry
Tarnowskie Góry
Tarnowskie Góry is a town in Silesia in southern Poland, near Katowice. Borders on the Upper Silesian Metropolitan Union - metropolis with the population of 2 millions. Located in the Silesian Highlands....
) ore mine. Together with John Baildon
John Baildon
John Baildon was a Scottish pioneer in metallurgy in continental Europe.Baildon was born in Larbert, Stirlingshire. In 1793, he came to Prussian Silesia on the invitation of Friedrich von Reden...
, Reden was responsible for the introduction of coke
Coke (fuel)
Coke is the solid carbonaceous material derived from destructive distillation of low-ash, low-sulfur bituminous coal. Cokes from coal are grey, hard, and porous. While coke can be formed naturally, the commonly used form is man-made.- History :...
into modern steelmaking process in Europe (in Gleiwitz (Gliwice
Gliwice
Gliwice is a city in Upper Silesia in southern Poland, near Katowice. Gliwice is the west district of the Upper Silesian Metropolitan Union – a metropolis with a population of 2 million...
), 1796, and, on a large scale, in Königshütte (Chorzów
Chorzów
Chorzów is a city in Silesia in southern Poland, near Katowice. Chorzów is one of the central districts of the Upper Silesian Metropolitan Union - a metropolis with a population of 2 million...
), 1802).

Reden was knighted by Friedrich Wilhelm II
Frederick William II of Prussia
Frederick William II was the King of Prussia, reigning from 1786 until his death. He was in personal union the Prince-Elector of Brandenburg and the sovereign prince of the Principality of Neuchâtel.-Early life:...
. Following the Napoleonic occupation of Prussia, he remained in office as the Minister of Mines to prevent the plundering of the mines by the French. Because of speeches on 9 November 1806, on the French occupying power, he was sacked from his ministry by Frederick William III, on 9 July 1807.

In the evening of his life, Reden retired to the Hirschberger Tal
Jelenia Góra valley
Jelenia Góra valley in Poland is a big valley at the Silesian northern side of the Western Sudetes and next to Kłodzko Valley the largest intramontane basin of the Sudetes. It is situated at an altitude of 250–400 meters above sea level and covers an area of 273 km2...
(Kotlina Jeleniogórska), at the well situated Buchwald (Bukowiec), which he had acquired in 1785. In 1802, he married Friederike Riedesel, Freiin zu Eisenbach, (:de:Friederike von Reden) daughter of Friedrich Adolf Riedesel, and Frederika Charlotte Riedesel
Frederika Charlotte Riedesel
Frederika Charlotte Louise von Massow, Baroness Riedesel zu Eisenbach was the wife of General Friedrich Adolf Riedesel of Brunswick. She accompanied him during the Saratoga Campaign in the American Revolutionary War and kept a journal of the campaign.-Early life:Frederika was born in 11 July 1746...
, but the marriage remained childless.

There is a recently-rebuilt monument to von Reden in Chorzów . This monument has a turbulent history having been erected and demolished several times with the changing political winds in Silesia. On 4 June 1935, the Society of German metalworks and miners donated the Reden medal, on the 25th Anniversary of the Wrocław University of Technology, as an award for excellent dissertations from mining and metallurgical engineers. This award is given since 1948, by the Society for Mining, Metallurgy, Raw Material and Environmental Technology.