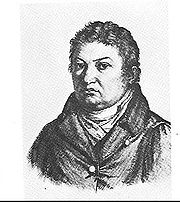 Weinbrenner began life apprenticed to his father, a carpenter. He worked as a builder in Zürich
Zürich
Zurich is the largest city in Switzerland and the capital of the canton of Zurich. It is located in central Switzerland at the northwestern tip of Lake Zurich...
and Lausanne
Lausanne
Lausanne is a city in Romandy, the French-speaking part of Switzerland, and is the capital of the canton of Vaud. The seat of the district of Lausanne, the city is situated on the shores of Lake Geneva . It faces the French town of Évian-les-Bains, with the Jura mountains to its north-west...
starting from 1788. He arrived to Vienna
Vienna
Vienna is the capital and largest city of the Republic of Austria and one of the nine states of Austria. Vienna is Austria's primary city, with a population of about 1.723 million , and is by far the largest city in Austria, as well as its cultural, economic, and political centre...
in 1790 and began his study of architecture, largely self-taught. In 1790-91 he studied at the Bauakademie of Vienna and Dresden, then, in 1791-92, spent several months in Berlin
Berlin
Berlin is the capital city of Germany and is one of the 16 states of Germany. With a population of 3.45 million people, Berlin is Germany's largest city. It is the second most populous city proper and the seventh most populous urban area in the European Union...
where he was exposed to Palladian architecture
Palladian architecture
Palladian architecture is a European style of architecture derived from the designs of the Venetian architect Andrea Palladio . The term "Palladian" normally refers to buildings in a style inspired by Palladio's own work; that which is recognised as Palladian architecture today is an evolution of...
. Carl Gotthard Langhans
Carl Gotthard Langhans
Carl Gotthard Langhans was a Prussian builder and architect. His works are among the earliest buildings in the German classicism movement. His best-known work is the Brandenburg Gate in Berlin.- Life :...
(1732-1808), David Gilly
David Gilly
David Gilly was a German architect and architecture-tutor in Prussia, the father of the architect Friedrich Gilly.-Life:...
(1748-1808) and Hans Christian Genelli (1763-1823) were influential in the formation of Weinbrenner's architectural thought. He spent the years 1792 to 1797 in Italy, where he was part of the circle around Carl Ludwig Fernow (1763-1808) in Rome
Rome
Rome is the capital of Italy and the country's largest and most populated city and comune, with over 2.7 million residents in . The city is located in the central-western portion of the Italian Peninsula, on the Tiber River within the Lazio region of Italy.Rome's history spans two and a half...
. His study of the ancient buildings of Rome, Pompeii
Pompeii
The city of Pompeii is a partially buried Roman town-city near modern Naples in the Italian region of Campania, in the territory of the comune of Pompei. Along with Herculaneum, Pompeii was destroyed and completely buried during a long catastrophic eruption of the volcano Mount Vesuvius spanning...
, Herculaneum
Herculaneum
Herculaneum was an ancient Roman town destroyed by volcanic pyroclastic flows in AD 79, located in the territory of the current commune of Ercolano, in the Italian region of Campania in the shadow of Mt...
and, especially, Paestum
Paestum
Paestum is the classical Roman name of a major Graeco-Roman city in the Campania region of Italy. It is located in the north of Cilento, near the coast about 85 km SE of Naples in the province of Salerno, and belongs to the commune of Capaccio, officially also named...
were foundational to his later work. He was among the first German architects to see the early Doric
Doric order
The Doric order was one of the three orders or organizational systems of ancient Greek or classical architecture; the other two canonical orders were the Ionic and the Corinthian.-History:...
buildings at Paestum.

Upon returning from Italy, Weinbrenner worked briefly in Strasbourg
Strasbourg
Strasbourg is the capital and principal city of the Alsace region in eastern France and is the official seat of the European Parliament. Located close to the border with Germany, it is the capital of the Bas-Rhin département. The city and the region of Alsace are historically German-speaking,...
and Hanover
Hanover
Hanover or Hannover, on the river Leine, is the capital of the federal state of Lower Saxony , Germany and was once by personal union the family seat of the Hanoverian Kings of Great Britain, under their title as the dukes of Brunswick-Lüneburg...
, but established himself in Karlsruhe
Karlsruhe
The City of Karlsruhe is a city in the southwest of Germany, in the state of Baden-Württemberg, located near the French-German border.Karlsruhe was founded in 1715 as Karlsruhe Palace, when Germany was a series of principalities and city states...
, where he would make his career as the official architect, working for both government and private clients. Karlsruhe was established in 1715 to replace a former capital and become the capital of the newly created Grand Duchy of Baden
Grand Duchy of Baden
The Grand Duchy of Baden was a historical state in the southwest of Germany, on the east bank of the Rhine. It existed between 1806 and 1918.-History:...
– now a central German state but then a sovereign principality. A generation of architects were trained under his supervision, and in 1825 he helped establish the Polytechnic School in Karlsruhe. With the architects he trained and the publication of his work, a "Weinbrenner style" of Classicism developed. Weinbrenner is, of course, the architect principally responsible for creating Karlsruhe as a Classical city and, beginning with his 1797 General Plan, for the development of the city plan with an official Protestant church (Stadtkirche) (1807–15), City Hall (1821–25) on the Triumphal Road leading to the Princely palace. Most of Weinbrenner's buildings were reconstructed in the 1950s following their destruction in the Second World War.