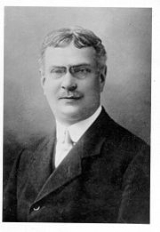 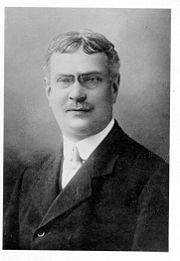 Friedrich Schrader was a German philologist of oriental languages, orientalist, art historian, writer, social democrat, translator and journalist. He also used the pseudonym
Pseudonym
A pseudonym is a name that a person assumes for a particular purpose and that differs from his or her original orthonym...
Ischtiraki (Arabic/Ottoman
Ottoman Turkish language
The Ottoman Turkish language or Ottoman language is the variety of the Turkish language that was used for administrative and literary purposes in the Ottoman Empire. It borrows extensively from Arabic and Persian, and was written in a variant of the Perso-Arabic script...
for "the socialist"). He lived from 1891 until 1918 in Constantinople
Constantinople
Constantinople was the capital of the Roman, Eastern Roman, Byzantine, Latin, and Ottoman Empires. Throughout most of the Middle Ages, Constantinople was Europe's largest and wealthiest city.-Names:...
(today Istanbul
Istanbul
Istanbul , historically known as Byzantium and Constantinople , is the largest city of Turkey. Istanbul metropolitan province had 13.26 million people living in it as of December, 2010, which is 18% of Turkey's population and the 3rd largest metropolitan area in Europe after London and...
)

Born in Wolmirstedt
Wolmirstedt
Wolmirstedt is a town in the Börde district in Saxony-Anhalt, Germany. It is located 14 km north of Magdeburg, on the river Ohre.-History:*1009 first documentary mention*1274 Ruthger von Blumenthal appointed Vogt of Wolmirstedt...
, Prussia
Prussia
Prussia was a German kingdom and historic state originating out of the Duchy of Prussia and the Margraviate of Brandenburg. For centuries, the House of Hohenzollern ruled Prussia, successfully expanding its size by way of an unusually well-organized and effective army. Prussia shaped the history...
, Friedrich Schrader passed his Abitur
Abitur
Abitur is a designation used in Germany, Finland and Estonia for final exams that pupils take at the end of their secondary education, usually after 12 or 13 years of schooling, see also for Germany Abitur after twelve years.The Zeugnis der Allgemeinen Hochschulreife, often referred to as...
at the Domgymnasium Magdeburg. After studies of Oriental Languages and art history at the University of Halle he wrote his Ph. D. thesis on a translation of the "Karmapradipa" (an important Vedic sutra) into German. The work WAS done under the supervision of Professor Richard Pischel
Richard Pischel
Richard Pischel was a German Indologist who was a native of Breslau.In 1870 he received his doctorate from the University of Breslau under the guidance of Adolf Friedrich Stenzler . His graduate thesis was De Kalidasae Cakuntali recensionibus...
, at that time the most eminent scholar on vedic languages.

In 1891 Schrader took a position as a lecturer at Robert College
Robert College
Robert College of Istanbul , is one of the most selective independent private high schools in Turkey. Robert College is a co-educational, boarding school with a wooded campus on the European side of Istanbul between the two bridges on the Bosphorus, with the Arnavutköy district to the east, and...
in Bebek, close to Constantinople
Constantinople
Constantinople was the capital of the Roman, Eastern Roman, Byzantine, Latin, and Ottoman Empires. Throughout most of the Middle Ages, Constantinople was Europe's largest and wealthiest city.-Names:...
, where he liveD with his family on the campus. Around 1900 he was "professeur" at a French-Armenian lycée in Pera, the European quarter of Constantinople (today Istanbul-Beyoğlu), and later at the German School (Alman Lisesi). Starting from the reign of Sultan Abdul Hamid II
Abdul Hamid II
His Imperial Majesty, The Sultan Abdülhamid II, Emperor of the Ottomans, Caliph of the Faithful was the 34th sultan of the Ottoman Empire...
, Schrader began to translate contemporary Turkish literature and to write articles about it in German journals and newspapers such as Das Literarische Echo and Frankfurter Zeitung
Frankfurter Zeitung
The Frankfurter Zeitung was a German language newspaper that appeared from 1856 to 1943. It emerged from a market letter that was published in Frankfurt...
.


Beginnings as a journalist

From 1907 until 1908 Schrader worked as a lecturer at the Russian Commercial College in Baku
Baku
Baku , sometimes spelled as Baki or Bakou, is the capital and largest city of Azerbaijan, as well as the largest city on the Caspian Sea and of the Caucasus region. It is located on the southern shore of the Absheron Peninsula, which projects into the Caspian Sea. The city consists of two principal...
, and undertook field studies in the Caucasus region. One of his research topics were the Persian
Persian religions
Several important religions and religious movements originated in Greater Iran, that is, among speakers of various Iranian languages and hence with an Iranian cultural background...
temples close to Baku located at natural gas sources, which are used for ritual flames.

In 1908-1917 Schrader, after the Ottoman revolution of 1908, returned to Constantinople and became, after some failed attempts to found a bilingual Turkish-German newspaper with Young Turkish friends (because the Turkish parts had to be printed with Arabic letters, the production costs became too high ) , co-founder and deputy Editor-in-chief for the bilingual (French-German) Constantinople-based daily newspaper Osmanischer Lloyd (French title Lloyd Ottoman). The paper was co-financed by the consortium running the Baghdad Railway
Baghdad Railway
The Baghdad Railway , was built from 1903 to 1940 to connect Berlin with the Ottoman Empire city of Baghdad with a line through modern-day Turkey, Syria, and Iraq....
project, the German Foreign Office, and the Berlin-based Bleichröder
Gerson von Bleichröder
Gerson von Bleichröder was a Jewish German banker.Bleichröder was born in Berlin. He was the eldest son of Samuel Bleichröder, who founded the banking firm of S. Bleichröder in 1803 in Berlin...
Bank. Schrader's feuilleton contributions about literature, arts, monuments and history of Constantinople were re-printed in many leading German daily newspapers (Frankfurter Zeitung
Frankfurter Zeitung
The Frankfurter Zeitung was a German language newspaper that appeared from 1856 to 1943. It emerged from a market letter that was published in Frankfurt...
, Kölnische Zeitung, Magdeburgische Zeitung), being collected in 1917 in the book Konstantinopel in Vergangenheit und Gegenwart.

Starting from 1908, Schrader lived with his British wife and his three sons in an apartment in the
Dogan Apartmani in Beyoğlu
Beyoglu
Beyoğlu is a district located on the European side of İstanbul, Turkey, separated from the old city by the Golden Horn...
.

In 1917 Schrader resigned from his post at the Osmanischer Lloyd (because of an internal conflict with other editors, and his increasing frustration about the German Middle East Policy) and focused on his historical and architectural interests. He became member of the Constantinople Municipal Commission for the Registration and Listing of Islamic and Byzantine monuments (which included the well-known Armenian photographer Hagop Iskender, at that time owner of the photography company Sabah and Joaillier. With a team of Turkish experts Schrader systematically catalogized monuments in the city threatened by the impact of war activities. Using archeological investigations, research, and interviews with locals, informations about the monuments were systematically gathered, while the monuments were photographed by Iskender. Valuable artefacts were recovered and preserved in the Archeological Museum of the city. The work remained unfinished since Schrader was forced to leave Constantinople after the German-Ottoman capitulation in November 1918.

In 1919, Schrader published a brief summary of the activities in a German journal (see below), the whereabouts of the recorded and collected material is unknown.

In 1918-19 Schrader escaped from internment by the Allies by ship to Odessa
Odessa
Odessa or Odesa is the administrative center of the Odessa Oblast located in southern Ukraine. The city is a major seaport located on the northwest shore of the Black Sea and the fourth largest city in Ukraine with a population of 1,029,000 .The predecessor of Odessa, a small Tatar settlement,...
. He left his ill British-Bulgarian wife and a male child in Constantinople. His two older sons, who were serving in the German-Turkish navy, were both demobilized to Germany. From Odessa he travelled in a railroad freight car through the war-ravaged Ukraine
Ukraine
Ukraine is a country in Eastern Europe. It has an area of 603,628 km², making it the second largest contiguous country on the European continent, after Russia...
to Brest-Litovsk, where he reached the German front line. In his diary, published in Germany in 1919, he described several dangerous situations in connection with the various civil war factions, but also the very warm reception and strong support the refugees receive by the local Jewish population.

In Berlin, Schrader tried in vain to obtain employment in academia or diplomacy. From 1919 to 1920 he worked for the SPD-owned theoretical journal Die Neue Zeit
Die Neue Zeit
Die Neue Zeit was a German socialist theoretical journal of the Social Democratic Party of Germany that was published from 1883 to 1923. Founded by leading socialist politicians and theorists, it became the most important organ of the SPD competing with Sozialistische Monatshefte...
, which had been the internationally most important Socialist and Marxist publication since the 1880s. In several articles Schrader voiced his criticism of the failed German Middle East policies before and during the First World War, especially in relation with the support for the Young Turkish regime and its attitude towards non-Muslim minorities. In an article published in 1920, Die Ägyptische Frage ("The Egyptian Question"), Schrader warned about possibly fateful and negative results of the Anglo-French colonial politics in the former Ottoman provinces Egypt, Palestine and Syria after World War I.

Schrader spent the last two years of his life in Berlin as freelance journalist, mainly writing for Deutsche Allgemeine Zeitung
Deutsche Allgemeine Zeitung
Deutsche Allgemeine Zeitung was a German newspaper that appeared between 1861 and 1945. It was associated with the Stinnes family, and supported right wing nationalist politics in the Weimar period, arguably contributing to the rise of Nazism.Hugo Stinnes took over the DAZ in 1920 in an effort to...
(DAZ), which was in the early years of the Weimar Republic still a liberal centre-right publication supporting the consolidation of Germany in the Weimar Republic
Weimar Republic
The Weimar Republic is the name given by historians to the parliamentary republic established in 1919 in Germany to replace the imperial form of government...
(the foreign policy editor and later editor in chief at that time was Paul Lensch
Paul Lensch
Paul Lensch was a German Social Democratic Party politician. He voted for the war credits in 1914 and supported the First World War...
, a former SPD politician and associate of Parvus and Rosa Luxemburg
Rosa Luxemburg
Rosa Luxemburg was a Marxist theorist, philosopher, economist and activist of Polish Jewish descent who became a naturalized German citizen...
).