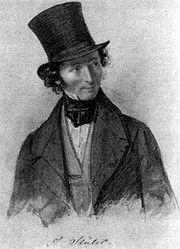 Friedrich August Stüler (January 28, 1800 – March 18, 1865) was an influential Prussia
Prussia
Prussia was a German kingdom and historic state originating out of the Duchy of Prussia and the Margraviate of Brandenburg. For centuries, the House of Hohenzollern ruled Prussia, successfully expanding its size by way of an unusually well-organized and effective army. Prussia shaped the history...
n architect
Architect
An architect is a person trained in the planning, design and oversight of the construction of buildings. To practice architecture means to offer or render services in connection with the design and construction of a building, or group of buildings and the space within the site surrounding the...
and builder. His masterwork is the Neues Museum
Neues Museum
The ' is a museum in Berlin, Germany, located to the north of the Altes Museum on Museum Island.It was built between 1843 and 1855 according to plans by Friedrich August Stüler, a student of Karl Friedrich Schinkel. The museum was closed at the beginning of World War II in 1939, and was heavily...
in Berlin, as well as the dome of the triumphal arch of the main portal of the Berliner Stadtschloss
Berliner Stadtschloss
The Stadtschloss , was a royal palace in the centre of Berlin, capital of Germany. The palace bore features of the Baroque style, and its shape, finalized by the mid 18th century, is attributed to Andreas Schlüter, whose first design is likely to date from 1702, though the palace incorporated...
.

Stüler was born in Mühlhausen
Mühlhausen
Mühlhausen is a city in the federal state of Thuringia, Germany. It is the capital of the Unstrut-Hainich district, and lies along the river Unstrut. Mühlhausen had c. 37,000 inhabitants in 2006.-History:...
and became a student of Karl Friedrich Schinkel
Karl Friedrich Schinkel
Karl Friedrich Schinkel was a Prussian architect, city planner, and painter who also designed furniture and stage sets. Schinkel was one of the most prominent architects of Germany and designed both neoclassical and neogothic buildings.-Biography:Schinkel was born in Neuruppin, Margraviate of...
in Berlin
Berlin
Berlin is the capital city of Germany and is one of the 16 states of Germany. With a population of 3.45 million people, Berlin is Germany's largest city. It is the second most populous city proper and the seventh most populous urban area in the European Union...
. After travelling to France and Italy together with Eduard Knoblauch
Eduard Knoblauch
Eduard Knoblauch was a German architect.Eduard Knoblauch was born in his family's house on Poststraße 23 in the Nikolaiviertel neighborhood in Berlin, Germany...
in 1829 and 1830 and to Russia together with Heinrich Strack
Heinrich Strack
Johann Heinrich Strack was a German architect of the Schinkelschule. His notable works include the Berlin Victory Column.-Life:...
in 1831, Stüler became Hofbauinspektor (Royal Buildings Inspector), Hofbaurat (Royal privy councillor for buildings) and director of the commission for the building of the Berliner Stadtschloss
Berliner Stadtschloss
The Stadtschloss , was a royal palace in the centre of Berlin, capital of Germany. The palace bore features of the Baroque style, and its shape, finalized by the mid 18th century, is attributed to Andreas Schlüter, whose first design is likely to date from 1702, though the palace incorporated...
in 1832. In 1837, he planned the rebuilding of the Winter Palace
Winter Palace
The Winter Palace in Saint Petersburg, Russia, was, from 1732 to 1917, the official residence of the Russian monarchs. Situated between the Palace Embankment and the Palace Square, adjacent to the site of Peter the Great's original Winter Palace, the present and fourth Winter Palace was built and...
in Saint Petersburg
Saint Petersburg
Saint Petersburg is a city and a federal subject of Russia located on the Neva River at the head of the Gulf of Finland on the Baltic Sea...
, but failed to realise these plans because Tsar Nicholas I of Russia
Nicholas I of Russia
Nicholas I , was the Emperor of Russia from 1825 until 1855, known as one of the most reactionary of the Russian monarchs. On the eve of his death, the Russian Empire reached its historical zenith spanning over 20 million square kilometers...
decided to rebuild the original Baroque
Baroque
The Baroque is a period and the style that used exaggerated motion and clear, easily interpreted detail to produce drama, tension, exuberance, and grandeur in sculpture, painting, literature, dance, and music...
/Rococo
Rococo
Rococo , also referred to as "Late Baroque", is an 18th-century style which developed as Baroque artists gave up their symmetry and became increasingly ornate, florid, and playful...
palace instead of Stülers Neo-Renaissance
Neo-Renaissance
Renaissance Revival is an all-encompassing designation that covers many 19th century architectural revival styles which were neither Grecian nor Gothic but which instead drew inspiration from a wide range of classicizing Italian modes...
concept. Stüler the returned to Berlin, where King Frederick William IV of Prussia
Frederick William IV of Prussia
|align=right|Upon his accession, he toned down the reactionary policies enacted by his father, easing press censorship and promising to enact a constitution at some point, but he refused to enact a popular legislative assembly, preferring to work with the aristocracy through "united committees" of...
opened a huge array of tasks to him, making him Architekt des Königs (Royal architect) in 1842.

Together with Frederick William, who had previously (since his first journey to Italy in 1828) studied Italian architecture, Stüler incorporated Classical antiquity
Classical antiquity
Classical antiquity is a broad term for a long period of cultural history centered on the Mediterranean Sea, comprising the interlocking civilizations of ancient Greece and ancient Rome, collectively known as the Greco-Roman world...
and Renaissance
Renaissance
The Renaissance was a cultural movement that spanned roughly the 14th to the 17th century, beginning in Italy in the Late Middle Ages and later spreading to the rest of Europe. The term is also used more loosely to refer to the historical era, but since the changes of the Renaissance were not...
architecture in what was to become Prussian Arcadia
Arcadia
Arcadia is one of the regional units of Greece. It is part of the administrative region of Peloponnese. It is situated in the central and eastern part of the Peloponnese peninsula. It takes its name from the mythological character Arcas. In Greek mythology, it was the home of the god Pan...
. They also conceived a recourse to early Christian
Christianity
Christianity is a monotheistic religion based on the life and teachings of Jesus as presented in canonical gospels and other New Testament writings...
motives such as the liturgy of the Early church to avoid political problems with the contemporary church. After the death of Ludwig Persius
Ludwig Persius
Friedrich Ludwig Persius was a Prussian architect and a student of Karl Friedrich Schinkel....
, Stüler assumed control of the building of the Friedenskirche in Berlin in 1845. While the Italian influence was deepened by a joint journey to Italy of Stüler and Frederick William in 1858/59, he was also influenced by English Cast-iron architecture
Cast-iron architecture
Cast-iron architecture is a form of architecture where cast iron plays a central role. It was a prominent style in the Industrial Revolution era when cast iron was relatively cheap and modern steel had not yet been developed.-Structural use:...
from a journey there in 1842.

Stüler died in Berlin, where he is buried in the Dorotheenstadt cemetery.

While many of the buildings Stüler built were destroyed in World War II
World War II
World War II, or the Second World War , was a global conflict lasting from 1939 to 1945, involving most of the world's nations—including all of the great powers—eventually forming two opposing military alliances: the Allies and the Axis...
, a few were restored - not in the original ways, but one can still see Stülers concepts on the outside, especially in the Jakobi church in Berlin.

Commonly, Stüler is viewed as a student of Karl Friedrich Schinkel as well as an architect of his own right, combining the wishes of Frederick William, Schinkels Classicism
Classicism
Classicism, in the arts, refers generally to a high regard for classical antiquity, as setting standards for taste which the classicists seek to emulate. The art of classicism typically seeks to be formal and restrained: of the Discobolus Sir Kenneth Clark observed, "if we object to his restraint...
and the new Historicism
Historicism (art)
Historicism refers to artistic styles that draw their inspiration from copying historic styles or artisans. After neo-classicism, which could itself be considered a historicist movement, the 19th century saw a new historicist phase marked by a return to a more ancient classicism, in particular in...
of the Wilhelminian era, though he didn't refer to himself as a student of Schinkel.