The Republican Guard is part of the French Gendarmerie. It is responsible for providing security in the Paris
Paris
Paris is the capital and largest city in France, situated on the river Seine, in northern France, at the heart of the Île-de-France region...
area and for providing guards of honor.

The Republican Guard is the heir of all bodies that have ensured in the course of history, honors and protection of the high authorities of the State and City of Paris. It relates more directly to the Municipal Guard of Paris, established on 12 Vendémiaire XI (October 4, 1802) by Napoleon Bonaparte. It distinguished itself in big battles, including Danzig and Friedland in 1807, Alcolea in 1808 and Burgos in 1812.
Republican Guard guarding the Elysee Palace

In 1813 it was dissolved following the attempted coup of General Malet and replaced by the Imperial Gendarmerie of Paris and then, under the Restoration, the Royal Guard of Paris and the Royal Mounted Police of Paris. In 1830, it is recreated, and again removed after the Revolution of 1848 in favor of the ephemeral Civic Guard.

In June 1848 created the Republican Guard of Paris, including an infantry regiment and a regiment of cavalry. It received its insignia July 14, 1880. It took part in the First World War and saw its flag and banner decorated with the Knight's Cross of the Legion of Honour. During the Second World War, it reported to the police headquarters and took the name of Guard of Paris. Part of its staff rallied to General de Gaulle and the Guard was involved in the fighting alongside the FFI at the liberation of Paris.

In 1952, the guard was renamed the Legion of the Republican Guard of Paris and took part in the Indochina War, which earned it the Croix de Guerre
Croix de guerre
The Croix de guerre is a military decoration of France. It was first created in 1915 and consists of a square-cross medal on two crossed swords, hanging from a ribbon with various degree pins. The decoration was awarded during World War I, again in World War II, and in other conflicts...
.

In 1978, the guard took its current name of "Republican Guard." President Giscard d'Estaing gave, on 11 November 1979, its new insignia. Michele Alliot-Marie, Minister of Defence, said in October 2002: "The Republican Guard has a popularity that transcends borders," it helps "to radiation French armies and France. "

The Republican Guard belongs to the French National Gendarmerie. 3200 men and women make it up (on a total of 105,000 in gendarmerie). Intrinsically related to Paris, the guards wear the armorial bearings of the city on their uniforms.

It consists of two infantry
Infantry
Infantrymen are soldiers who are specifically trained for the role of fighting on foot to engage the enemy face to face and have historically borne the brunt of the casualties of combat in wars. As the oldest branch of combat arms, they are the backbone of armies...
regiment
Regiment
A regiment is a major tactical military unit, composed of variable numbers of batteries, squadrons or battalions, commanded by a colonel or lieutenant colonel...
s (one includes a motorcycle
Motorcycle
A motorcycle is a single-track, two-wheeled motor vehicle. Motorcycles vary considerably depending on the task for which they are designed, such as long distance travel, navigating congested urban traffic, cruising, sport and racing, or off-road conditions.Motorcycles are one of the most...
squadron) and a horse cavalry
Cavalry
Cavalry or horsemen were soldiers or warriors who fought mounted on horseback. Cavalry were historically the third oldest and the most mobile of the combat arms...
regiment. It also has four musical formations
Military band
A military band originally was a group of personnel that performs musical duties for military functions, usually for the armed forces. A typical military band consists mostly of wind and percussion instruments. The conductor of a band commonly bears the title of Bandmaster or Director of Music...
, as well as groups demonstrating prowess in horseback or motorcycle maneuvers. The regiment is commanded by a colonel and his staff.

“The Republican Guard has a popularity which exceeds the borders,” it contributes “to the prestige of the French Army and France.” (Minister for Defense, October 2002)

Detachments of the cavalry regiment reinforce the two infantry regiments in carrying out ceremonial and security roles in and around state buildings. These include the lining of both sides of the entry stairs of the Elysium or Matignon Palaces (and other buildings) by dismounted cavalry on special occasions. These Republican Guards belong to the Cavalry Regiment and not to the infantry units whose mission is to ensure the security of these palaces and of senior government figures. Certain ceremonial duties in the form of honour guards are performed when state visits are made to the Paris museums or the Opera, as well as at the moment of the descent of the Academicians beneath the cupola of the French Academy.

Formerly, one could hire Republican Guards for private fashionable evenings but this option was terminated by President Giscard d'Estaing.

Controversially, they will frequently accept other honors from regiments of allied countries, but they will usually award their own honors, such as the famed spurs of the Republican Guard, only to royalty or to individuals of high standing.

Some guards are assigned to more specific missions: 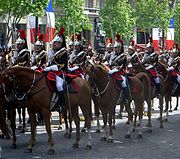 The cavalry also includes the Fanfare of Cavalry and the brass band of Cavalry. It also includes more than 500 soldiers and civilians which includes a growing number of women (a little more than 8%). It has approximately 550 horses (11% mares) and remains the last unit of the French Army with horses.

The regiment is composed of:


This unit has a section of high level sportsmen, in particular Hubert Perring, dressage champion of France in 2005, and member of the French team for the World Equestrian Games of 2006.

The republican guard has two regiments of infantry:

Activities of the Infantry Regiments

Orchestra of the Republican Guard

Depending on staff availability, this formation has two main parts: