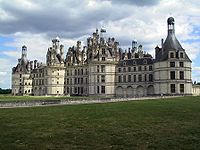 French Renaissance architecture is the style of architecture which was imported to France from Italy during the early 16th century and developed in the light of local architectural traditions.

During the early years of the 16th century the French were involved in wars in northern Italy, bringing back to France not just the Renaissance art treasures as their war booty
Treasure
Treasure is a concentration of riches, often one which is considered lost or forgotten until being rediscovered...
, but also stylistic ideas. In the Loire Valley
Loire Valley
The Loire Valley , spanning , is located in the middle stretch of the Loire River in central France. Its area comprises approximately . It is referred to as the Cradle of the French Language, and the Garden of France due to the abundance of vineyards, fruit orchards, and artichoke, asparagus, and...
a wave of building was carried and many Renaissance chateaux appeared at this time, the earliest example being the Château d'Amboise
Château d'Amboise
The royal Château at Amboise is a château located in Amboise, in the Indre-et-Loire département of the Loire Valley in France.-Origins and royal residence:...
(c. 1495). The style became dominant under Francis I
Francis I of France
Francis I was King of France from 1515 until his death. During his reign, huge cultural changes took place in France and he has been called France's original Renaissance monarch...
(See Châteaux of the Loire Valley
Châteaux of the Loire Valley
The châteaux of the Loire Valley are part of the architectural heritage of the historic towns of Amboise, Angers, Blois, Chinon, Nantes, Orléans, Saumur, and Tours along the Loire River in France...
).

The style progressively developed into a French Mannerism
Mannerism
Mannerism is a period of European art that emerged from the later years of the Italian High Renaissance around 1520. It lasted until about 1580 in Italy, when a more Baroque style began to replace it, but Northern Mannerism continued into the early 17th century throughout much of Europe...
known as the Henry II style
Henry II style
The Henry II style was the chief artistic movement of the sixteenth century in France, part of Northern Mannerism. It came immediately after High Renaissance and was largely the product of Italian influences...
under architects such as Sebastiano Serlio
Sebastiano Serlio
Sebastiano Serlio was an Italian Mannerist architect, who was part of the Italian team building the Palace of Fontainebleau...
, who was engaged after 1540 in work at the Château de Fontainebleau
Château de Fontainebleau
The Palace of Fontainebleau, located 55 kilometres from the centre of Paris, is one of the largest French royal châteaux. The palace as it is today is the work of many French monarchs, building on an early 16th century structure of Francis I. The building is arranged around a series of courtyards...
. At Fontainebleau Italian artists such as Rosso Fiorentino
Rosso Fiorentino
Giovanni Battista di Jacopo , known as Rosso Fiorentino , or Il Rosso, was an Italian Mannerist painter, in oil and fresco, belonging to the Florentine school.-Biography:...
, Francesco Primaticcio
Francesco Primaticcio
Francesco Primaticcio was an Italian Mannerist painter, architect and sculptor who spent most of his career in France.-Biography:...
, and Niccolo dell' Abbate formed the First School of Fontainebleau
School of Fontainebleau
The Ecole de Fontainebleau refers to two periods of artistic production in France during the late Renaissance centered around the royal Château de Fontainebleau, that were crucial in forming the French version of Northern Mannerism....
. Another castle built by Serlio is the Château d'Ancy-le-Franc
Château d'Ancy-le-Franc
The Château d'Ancy-le-Franc, designed by Sebastiano Serlio and constructed 1544-1550, is one of the sites where the Italian Renaissance was introduced, full-blown, to France...
in Burgundy who was also lavishly decorated by the Flemish and Italian artists from Fontainebleau. Architects such as Philibert Delorme, Androuet du Cerceau
Androuet du Cerceau
Androuet du Cerceau was a family of French architects and designers active in the 16th and early 17th century.*Jacques I Androuet du Cerceau *Jean Baptiste Androuet du Cerceau...
, Giacomo Vignola, and Pierre Lescot
Pierre Lescot
Pierre Lescot was a French architect active during the French Renaissance, "the man who was first responsible for the implantation of pure and correct classical architecture in France." He was born in Paris....
, were inspired by the new ideas. The southwest interior facade of the Cour Carrée of the Louvre
Louvre
The Musée du Louvre – in English, the Louvre Museum or simply the Louvre – is one of the world's largest museums, the most visited art museum in the world and a historic monument. A central landmark of Paris, it is located on the Right Bank of the Seine in the 1st arrondissement...
in Paris
Paris
Paris is the capital and largest city in France, situated on the river Seine, in northern France, at the heart of the Île-de-France region...
was designed by Lescot and covered with exterior carvings by Jean Goujon
Jean Goujon
Jean Goujon was a French Renaissance sculptor and architect.-Biography:His early life is little known; he was likely born in Normandy and may have traveled in Italy...
. Architecture continued to thrive in the reigns of Henry II
Henry II of France
Henry II was King of France from 31 March 1547 until his death in 1559.-Early years:Henry was born in the royal Château de Saint-Germain-en-Laye, near Paris, the son of Francis I and Claude, Duchess of Brittany .His father was captured at the Battle of Pavia in 1525 by his sworn enemy,...
and Henry III
Henry III of France
Henry III was King of France from 1574 to 1589. As Henry of Valois, he was the first elected monarch of the Polish-Lithuanian Commonwealth with the dual titles of King of Poland and Grand Duke of Lithuania from 1573 to 1575.-Childhood:Henry was born at the Royal Château de Fontainebleau,...
.