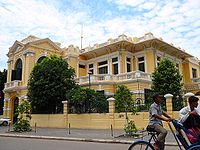 French Colonial a style of architecture used by the French during colonization. Many French colonies, especially those in South-East Asia, have previously been reluctant to promote their colonial architecture as an asset for tourism, however in recent times, the new-generation of local authorities have somewhat 'embraced' the architecture.

French Colonial was one of four domestic architectural styles that developed during the colonial period in what would become the United States
United States
The United States of America is a federal constitutional republic comprising fifty states and a federal district...
. The other styles were Colonial Georgian, Dutch Colonial
Dutch Colonial
Dutch Colonial is a style of domestic architecture, primarily characterized by gambrel roofs having curved eaves along the length of the house...
, and Spanish Colonial. French Colonial developed in the settlements of the Illinois Country
Illinois Country
The Illinois Country , also known as Upper Louisiana, was a region in what is now the Midwestern United States that was explored and settled by the French during the 17th and 18th centuries. The terms referred to the entire Upper Mississippi River watershed, though settlement was concentrated in...
and French Louisiana
Louisiana (New France)
Louisiana or French Louisiana was an administrative district of New France. Under French control from 1682–1763 and 1800–03, the area was named in honor of Louis XIV, by French explorer René-Robert Cavelier, Sieur de la Salle...
. It is believed to have been primarily influenced by the building styles of French Canada
French Canada
French Canada, also known as "Lower Canada", is a term to distinguish the French Canadian population of Canada from English Canada.-Definition:...
and the Caribbean
Caribbean
The Caribbean is a crescent-shaped group of islands more than 2,000 miles long separating the Gulf of Mexico and the Caribbean Sea, to the west and south, from the Atlantic Ocean, to the east and north...
. It had its beginnings in 1699 with the establishment of French Louisiana but continued to be built after Spain
Spain
Spain , officially the Kingdom of Spain languages]] under the European Charter for Regional or Minority Languages. In each of these, Spain's official name is as follows:;;;;;;), is a country and member state of the European Union located in southwestern Europe on the Iberian Peninsula...
assumed control of the colonial territory in 1763. Styles of building that evolved during the French colonial period include the Creole cottage
Creole cottage
Creole cottage is a term loosely used to refer to a type of vernacular architecture indigenous to the Gulf Coast of the United States. Within this building type comes a series of variations. An expanded version of this type of building is commonly referred to as Gulf Coast cottage, with the...
, Creole townhouse, and French Creole plantation house.

Most buildings constructed during the French colonial period utilized a heavy timber frame of logs installed vertically on a sill (poteaux-sur-solle
Poteaux-sur-solle
Poteaux-sur-solle is the name for the "posts-on-sill" style of French colonial architecture used by French and French-Canadian settlers in North America. Houses in this style in the present-day United States can be found in Ste. Genevieve, Missouri; Prairie du Rocher, Illinois, and former French...
) or into the earth (poteaux-en-terre). An infill of lime mortar or clay mixed with small stones (pierrotage
Pierrotage
A construction technique in which rock fill is used between vertical wooden posts. It was used by French settlers in the Americas.-See also:*Ste. Genevieve, Missouri*New France*French colonization of the Americas*French architecture*Poteaux-en-terre...
) or a mixture of mud, moss and animal hair (bousillage
Bousillage
Bousillage is the name of one of the components of the style of construction that uses vertical logs enclosed or filled by a mud mixture. This style was commonly used by 18th century French colonial settlers in the Americas.Bousillage, in south Louisiana, was a mixture of clay earth and retted...
) was used to pack between the logs. Many times this infill would later be replaced with brick. This method of construction was used in the Illinois Country as well as Louisiana.

General characteristics of a French Colonial dwelling included a raised basement
Basement
__FORCETOC__A basement is one or more floors of a building that are either completely or partially below the ground floor. Basements are typically used as a utility space for a building where such items as the furnace, water heater, breaker panel or fuse box, car park, and air-conditioning system...
which would support the floor of the home's primary living quarters. Exterior stairs were another common element; the stairs would often climb up to a distinctive, full-length porch
Porch
A porch is external to the walls of the main building proper, but may be enclosed by screen, latticework, broad windows, or other light frame walls extending from the main structure.There are various styles of porches, all of which depend on the architectural tradition of its location...
, on a home's front facade. The porch roof was normally part of the overall roof. French Colonial roofs were either steep hipped roof
Hip roof
A hip roof, or hipped roof, is a type of roof where all sides slope downwards to the walls, usually with a fairly gentle slope. Thus it is a house with no gables or other vertical sides to the roof. A square hip roof is shaped like a pyramid. Hip roofs on the houses could have two triangular side...
s with a dormer
Dormer
A dormer is a structural element of a building that protrudes from the plane of a sloping roof surface. Dormers are used, either in original construction or as later additions, to create usable space in the roof of a building by adding headroom and usually also by enabling addition of windows.Often...
or dormers or a side-gabled roof. Porches were often accessed via French doors. French Colonial homes in the American South
Southern United States
The Southern United States—commonly referred to as the American South, Dixie, or simply the South—constitutes a large distinctive area in the southeastern and south-central United States...
commonly had stucco
Stucco
Stucco or render is a material made of an aggregate, a binder, and water. Stucco is applied wet and hardens to a very dense solid. It is used as decorative coating for walls and ceilings and as a sculptural and artistic material in architecture...
ed exterior walls.
The source of this article is wikipedia, the free encyclopedia.  The text of this article is licensed under the GFDL.