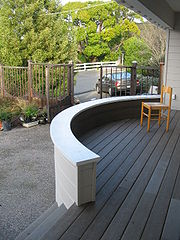 A porch is external to the walls of the main building proper, but may be enclosed by screen, latticework
Latticework
Latticework is a framework consisting of a criss-crossed pattern of strips of building material, typically wood or metal. The design is created by crossing the strips to form a network...
, broad windows, or other light frame walls extending from the main structure.

There are various styles of porches, all of which depend on the architectural tradition of its location. All porches will allow for sufficient space for a person to comfortably pause before entering or after exiting the building. However, they may be larger. Verandah
Verandah
A veranda or verandah is a roofed opened gallery or porch. It is also described as an open pillared gallery, generally roofed, built around a central structure...
s, for example, are usually quite large and may encompass the entire facade
Facade
A facade or façade is generally one exterior side of a building, usually, but not always, the front. The word comes from the French language, literally meaning "frontage" or "face"....
as well as the sides of a structure. At the other extreme, the Grand Hotel
Grand Hotel (Mackinac Island)
The Grand Hotel is a historic hotel and coastal resort located on Mackinac Island, Michigan, a small island located at the eastern end of the Straits of Mackinac within Lake Huron between the state's Upper and Lower Peninsulas. Constructed in the late 19th century, the facility advertises itself as...
on Mackinac Island, Michigan has the longest porch in the world at 660 feet (201.2 m) in length.

In eastern North America and New England
New England
New England is a region in the northeastern corner of the United States consisting of the six states of Maine, New Hampshire, Vermont, Massachusetts, Rhode Island, and Connecticut...
, a porch is a small area, usually unenclosed, that is at the main floor height usually used as a sitting area or for removal of working clothes so as not to get the interior of the house dirty, as the front door is accessed via the porch. In the Western United States
Western United States
.The Western United States, commonly referred to as the American West or simply "the West," traditionally refers to the region comprising the westernmost states of the United States. Because the U.S. expanded westward after its founding, the meaning of the West has evolved over time...
, ranch style homes often use a covered porch to provide shade for the entrance and southern wall of the residence. In the Southern United States
Southern United States
The Southern United States—commonly referred to as the American South, Dixie, or simply the South—constitutes a large distinctive area in the southeastern and south-central United States...
and Southern Ontario
Southern Ontario
Southern Ontario is a region of the province of Ontario, Canada that lies south of the French River and Algonquin Park. Depending on the inclusion of the Parry Sound and Muskoka districts, its surface area would cover between 14 to 15% of the province. It is the southernmost region of...
, Canada
Canada
Canada is a North American country consisting of ten provinces and three territories. Located in the northern part of the continent, it extends from the Atlantic Ocean in the east to the Pacific Ocean in the west, and northward into the Arctic Ocean...
, a porch is often as broad as it is deep, and may provide sufficient space for residents to entertain guests or gather on special occasions. Older American homes, particularly those built during the era of Victorian Architecture
Victorian architecture
The term Victorian architecture refers collectively to several architectural styles employed predominantly during the middle and late 19th century. The period that it indicates may slightly overlap the actual reign, 20 June 1837 – 22 January 1901, of Queen Victoria. This represents the British and...
, or the Queen Anne style, often included a porch in both the front and the back of the home. This is used as a sitting space as well. However, many American homes built since the 1940s with a porch only have a token one, (rear one) usually too small for comfortable social use and adding only to the visual impression of the building. The New Urbanism
New urbanism
New Urbanism is an urban design movement, which promotes walkable neighborhoods that contain a range of housing and job types. It arose in the United States in the early 1980s, and has gradually continued to reform many aspects of real estate development, urban planning, and municipal land-use...
movement in architecture urges a reversal in this trend, recommending a large porch facing the street, to help build community ties.

When covered, a porch not only provides protection from sun or rain but may also form, in effect, an extra exterior room that may accommodate chairs, tables and other furniture, to be used as living space. Screens are often used in some areas to exclude flying insects.

Porches typically are architecturally unified with the rest of the house, using similar design elements as the rest of the structure, and may be integrated into the roof line or upper stories.

In Britain
United Kingdom
The United Kingdom of Great Britain and Northern IrelandIn the United Kingdom and Dependencies, other languages have been officially recognised as legitimate autochthonous languages under the European Charter for Regional or Minority Languages...
the projecting porch had come into common use in churches by early medieval times. They were usually built of stone, but also occasionally of timber. They were normally placed on the south side of the church, but also on the west and north sides, sometimes in multiple. The porches acted to give cover to worshippers, but they also had a liturgical use. At a baptism, the priest would receive the sponsors with the infant in the porch and the service began there.

In later medieval times, the porch sometimes had two storeys, with a room above the entrance which was used as a local school, meeting room, storeroom and even armoury. If the village or town possessed a library of books, it would be housed there.

Sometimes the church custodian lived in the upper storey and a window into the church would allow supervision of the main church interior. Some British churches have highly ornamented porches, both externally and internally. The south porch at Northleach
Northleach
Northleach is a small Cotswold market town in Gloucestershire, England. It constitutes the major part of the civil parish of Northleach with Eastington.The nearest railway stations are Moreton-in-Marsh, Kingham and Shipton on the Cotswold Line....
, Gloucestershire
Gloucestershire
Gloucestershire is a county in South West England. The county comprises part of the Cotswold Hills, part of the flat fertile valley of the River Severn, and the entire Forest of Dean....
, in the Cotswolds
Cotswolds
The Cotswolds are a range of hills in west-central England, sometimes called the Heart of England, an area across and long. The area has been designated as the Cotswold Area of Outstanding Natural Beauty...
, built in 1480, is a well-known example, and there are several others in East Anglia
East Anglia
East Anglia is a traditional name for a region of eastern England, named after an ancient Anglo-Saxon kingdom, the Kingdom of the East Angles. The Angles took their name from their homeland Angeln, in northern Germany. East Anglia initially consisted of Norfolk and Suffolk, but upon the marriage of...
and elsewhere in the UK. 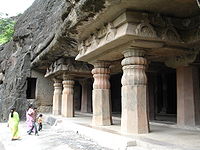 In India
India
India , officially the Republic of India , is a country in South Asia. It is the seventh-largest country by geographical area, the second-most populous country with over 1.2 billion people, and the most populous democracy in the world...
porches and verandahs are popular elements of secular as well as religious architecture. In the Hindu temple
Hindu temple
A Mandir, Devalayam, Devasthanam, or a Hindu temple is a place of worship for followers of Hinduism...
the mandapa
Mandapa
A mandapa in Indian architecture is a pillared outdoor hall or pavilion for public rituals.-Temple architecture:...
is a porch-like structure through the gopuram
Gopuram
A Gopuram or Gopura, is a monumental tower, usually ornate, at the entrance of any temple, especially in Southern India. This forms a prominent feature of Koils, Hindu temples of the Dravidian style. They are topped by the kalasam, a bulbous stone finial...
(ornate gateway) and leading to the temple. It is used for religious dancing and music and is part of the basic temple compound.
Examples of Indian buildings with porches include: