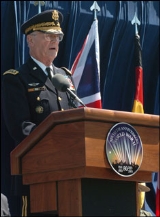 Kroesen is a graduate of Rutgers University
Rutgers University
Rutgers, The State University of New Jersey , is the largest institution for higher education in New Jersey, United States. It was originally chartered as Queen's College in 1766. It is the eighth-oldest college in the United States and one of the nine Colonial colleges founded before the American...
. He earned an M.A.
Master of Arts (postgraduate)
A Master of Arts from the Latin Magister Artium, is a type of Master's degree awarded by universities in many countries. The M.A. is usually contrasted with the M.S. or M.Sc. degrees...
in International Affairs at George Washington University
George Washington University
The George Washington University is a private, coeducational comprehensive university located in Washington, D.C. in the United States...
. He commanded troops in World War II
World War II
World War II, or the Second World War , was a global conflict lasting from 1939 to 1945, involving most of the world's nations—including all of the great powers—eventually forming two opposing military alliances: the Allies and the Axis...
, the Korean War
Korean War
The Korean War was a conventional war between South Korea, supported by the United Nations, and North Korea, supported by the People's Republic of China , with military material aid from the Soviet Union...
, and the Vietnam War
Vietnam War
The Vietnam War was a Cold War-era military conflict that occurred in Vietnam, Laos, and Cambodia from 1 November 1955 to the fall of Saigon on 30 April 1975. This war followed the First Indochina War and was fought between North Vietnam, supported by its communist allies, and the government of...
. He was awarded the Department of Defense
United States Department of Defense
The United States Department of Defense is the U.S...
Distinguished Service Medal
Distinguished Service Medal (United States)
The Distinguished Service Medal is the highest non-valorous military and civilian decoration of the United States military which is issued for exceptionally meritorious service to the government of the United States in either a senior government service position or as a senior officer of the United...
. He also served as the Vice Chief of Staff of the United States Army
United States Army
The United States Army is the main branch of the United States Armed Forces responsible for land-based military operations. It is the largest and oldest established branch of the U.S. military, and is one of seven U.S. uniformed services...
.

After leaving the army, Kroesen became a businessman. He is currently chairman of the board of Military Professional Resources Inc.
Military Professional Resources Inc.
L-3 MPRI, is a global provider of integrated training solutions offering a wide range of professional services to both public and private customers, most notably the U.S. Department of Defense, the U.S. Department of State, the U.S. Department of Justice, U.S...
and a senior fellow
Fellow
A fellow in the broadest sense is someone who is an equal or a comrade. The term fellow is also used to describe a person, particularly by those in the upper social classes. It is most often used in an academic context: a fellow is often part of an elite group of learned people who are awarded...
at the Institute of Land Warfare of the Association of the United States Army
Association of the United States Army
The Association of the United States Army is a private, non-profit organization that acts primarily as an advocacy group for the United States Army. Founded in 1950, it has 125 chapters worldwide. Membership is open to everyone, not just Army personnel, nor is membership mandatory for soldiers,...
. He is additionally the Vice-President of the American Security Council Foundation
American Security Council Foundation
The American Security Council Foundation is a non-profit organization founded by John M. Fisher that seeks to influence United States foreign policy by "Promoting Peace through Strength". The ASCF was formed in 1958, and was originally known as the Institute for American Strategy...
.

General Kloesen fought in WWII with the 254th Infantry Regiment of the 63rd Infantry Division. He was a company grade officer, serving as platoon
Platoon
A platoon is a military unit typically composed of two to four sections or squads and containing 16 to 50 soldiers. Platoons are organized into a company, which typically consists of three, four or five platoons. A platoon is typically the smallest military unit led by a commissioned officer—the...
leader and company
Company
A company is a form of business organization. It is an association or collection of individual real persons and/or other companies, who each provide some form of capital. This group has a common purpose or focus and an aim of gaining profits. This collection, group or association of persons can be...
commander, in the fighting in the Colmar Pocket
Colmar Pocket
The Colmar Pocket ; in Alsace, France, was the site of an operation during the Second World War, between 20 January and 9 February 1945, where the French First Army and the U.S...
and into Germany. He participated in the particularly tough fighting in Jebsheim
Jebsheim
Jebsheim is a commune in the Haut-Rhin department in Alsace in north-eastern France.-References:*...
.

The four-star general was injured in Heidelberg
Heidelberg
-Early history:Between 600,000 and 200,000 years ago, "Heidelberg Man" died at nearby Mauer. His jaw bone was discovered in 1907; with scientific dating, his remains were determined to be the earliest evidence of human life in Europe. In the 5th century BC, a Celtic fortress of refuge and place of...
on September 15, 1981, when his armour
Armour
Armour or armor is protective covering used to prevent damage from being inflicted to an object, individual or a vehicle through use of direct contact weapons or projectiles, usually during combat, or from damage caused by a potentially dangerous environment or action...
ed Mercedes
Mercedes
Mercedes is a girl's name of Spanish origin, referring to a title for the Virgin Mary, "Our Lady of Mercy". The word may also refer to:Automobile-related...
was targeted with a RPG-7
RPG-7
The RPG-7 is a widely-produced, portable, unguided, shoulder-launched, anti-tank rocket-propelled grenade launcher. Originally the RPG-7 and its predecessor, the RPG-2, were designed by the Soviet Union, and now manufactured by the Bazalt company...
anti-tank rocket. Responsibility for the attack was claimed by the "Kommando Gudrun Ensslin
Gudrun Ensslin
Gudrun Ensslin was a founder of the German militant group Red Army Faction . After becoming involved with co-founder Andreas Baader, Ensslin was influential in the politicization of Baader's voluntaristic anarchistic beliefs. Ensslin was perhaps the intellectual head of the RAF...
" of the Red Army Faction
Red Army Faction
The radicalized were, like many in the New Left, influenced by:* Sociological developments, pressure within the educational system in and outside Europe and the U.S...
(aka Baader-Meinhof Gang).