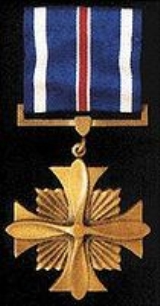 The first award of the Distinguished Flying Cross was made by President Calvin Coolidge on May 2, 1927, to ten aviators of the Air Corps who had participated in the U.S. Army Pan American Flight, which took place from December 21, 1926 to May 2, 1927. Two of the airmen died in a mid-air collision trying to land at Buenos Aires
Buenos Aires
Buenos Aires is the capital and largest city of Argentina, and the second-largest metropolitan area in South America, after São Paulo. It is located on the western shore of the estuary of the Río de la Plata, on the southeastern coast of the South American continent...
on February 26, 1927, and received their awards posthumously. Since the award had only been authorized by Congress the previous year, no medals had yet been struck, and the Pan American airmen initially received only certificates. Among the ten airmen were Major Herbert A. Dargue
Herbert Dargue
Herbert Arthur "Bert" Dargue was a career officer in the United States Army, reaching the rank of major general in the Army Air Forces. He was a pioneer military aviator and one of the first ten recipients of the Distinguished Flying Cross.Dargue entered the United States Military Academy on June...
, Captains Ira C. Eaker and Muir S. Fairchild
Muir S. Fairchild
General Muir Stephen Fairchild was former vice chief of staff of the United States Air Force. He was born September 2, 1894 at Bellingham, Washington, and died March 17, 1950 at Fort Myer, Virginia.-Early service:Muir S...
, and 1st Lt. Ennis C. Whitehead.

Charles Lindbergh received the first presentation of the medal little more than a month later, from Coolidge during the Washington, DC homecoming reception on June 11, 1927, from his trans-Atlantic flight. The medal had hurriedly been struck and readied just for that occasion. Interestingly, the 1927 War Department General Order (G.O. 8), authorizing Lindbergh's DFC states that it was awarded by the President, while the General Order (G.O. 6) for the Pan American Flyers' DFC citation notes that the War Department awarded it "by direction of the President." The first Distinguished Flying Cross to be awarded to a Naval Aviator
Naval Aviator
A United States Naval Aviator is a qualified pilot in the United States Navy, Marine Corps or Coast Guard.-Naming Conventions:Most Naval Aviators are Unrestricted Line Officers; however, a small number of Limited Duty Officers and Chief Warrant Officers are also trained as Naval Aviators.Until 1981...
was received by then-Commander Richard E. Byrd, for his flight on May 9, 1926, to and from the North Pole
North Pole
The North Pole, also known as the Geographic North Pole or Terrestrial North Pole, is, subject to the caveats explained below, defined as the point in the northern hemisphere where the Earth's axis of rotation meets its surface...
. Both Lindbergh and Byrd also received the Medal of Honor
Medal of Honor
The Medal of Honor is the highest military decoration awarded by the United States government. It is bestowed by the President, in the name of Congress, upon members of the United States Armed Forces who distinguish themselves through "conspicuous gallantry and intrepidity at the risk of his or her...
for their feats.

Numerous military recipients of the medal would later earn greater fame in other occupations—several astronauts, actors and politicians (including former President George H. W. Bush
George H. W. Bush
George Herbert Walker Bush is an American politician who served as the 41st President of the United States . He had previously served as the 43rd Vice President of the United States , a congressman, an ambassador, and Director of Central Intelligence.Bush was born in Milton, Massachusetts, to...
) are Distinguished Flying Cross holders.

DFC awards could be retroactive to cover notable achievements back until the beginning of World War I
World War I
World War I , which was predominantly called the World War or the Great War from its occurrence until 1939, and the First World War or World War I thereafter, was a major war centred in Europe that began on 28 July 1914 and lasted until 11 November 1918...
. On February 23, 1929, Congress passed special legislation to allow the award of the DFC to the Wright brothers for their December 17, 1903 flight. Other civilians who have received the award include Wiley Post
Wiley Post
Wiley Hardeman Post was a famed American aviator, the first pilot to fly solo around the world. Also known for his work in high altitude flying, Post helped develop one of the first pressure suits. His Lockheed Vega aircraft, the Winnie Mae, was on display at the National Air and Space Museum's...
, Jacqueline Cochran
Jacqueline Cochran
Jacqueline Cochran was a pioneer American aviator, considered to be one of the most gifted racing pilots of her generation...
, Roscoe Turner
Roscoe Turner
Roscoe Turner was an aviator who was a three time winner of the Thompson Trophy.-Background:Turner was born in Corinth, Mississippi, the eldest son of a poor but respectable farmer. He came to realize that he did not want to be a farmer and found that he was attracted to mechanical devices instead...
, Amelia Earhart
Amelia Earhart
Amelia Mary Earhart was a noted American aviation pioneer and author. Earhart was the first woman to receive the U.S. Distinguished Flying Cross, awarded for becoming the first aviatrix to fly solo across the Atlantic Ocean...
, and Eugene Ely. Eventually, it was limited to military personnel by an Executive Order issued by President Coolidge.

During World War II
World War II
World War II, or the Second World War , was a global conflict lasting from 1939 to 1945, involving most of the world's nations—including all of the great powers—eventually forming two opposing military alliances: the Allies and the Axis...
the medal's award criteria varied widely depending on the theater of operations, aerial combat, and the missions accomplished. In Europe some bomber crewmembers received it for completing a tour of duty of twenty-five sortees; elsewhere much higher criteria were used.

During wartime, members of the Armed Forces of friendly foreign nations serving with the United States are eligible for the Distinguished Flying Cross. It is also given to those who display heroism while working as instructors or students at flying schools.

Col. Francis S. "Gabby" Gabreski
Gabby Gabreski
Francis Stanley "Gabby" Gabreski was the top American fighter ace in Europe during World War II, a jet fighter ace in Korea, and a career officer in the United States Air Force with more than 26 years service.Although best known for his credited destruction of 34½ aircraft in aerial combat and...
received 13 Distinguished Flying Crosses—the most earned by any person.

The Distinguished Flying Cross was designed by Elizabeth Will and Arthur E. DuBois. It is a bronze
Bronze
Bronze is a metal alloy consisting primarily of copper, usually with tin as the main additive. It is hard and brittle, and it was particularly significant in antiquity, so much so that the Bronze Age was named after the metal...
cross pattee
Cross pattée
A cross pattée is a type of cross which has arms narrow at the centre, and broader at the perimeter. An early English example from the start of the age of heraldry proper A cross pattée (or "cross patty", known also as "cross formée/formy") is a type of cross which has arms narrow at the...
, with rays between the arms of the cross. On the obverse is a propeller of four blades, with one blade in each arm of the cross and in the re-entrant angles of the cross are rays which form a square. The cross is suspended by a rectangle-shaped bar and centered on this is a plain shield. The reverse
Obverse and reverse
Obverse and its opposite, reverse, refer to the two flat faces of coins and some other two-sided objects, including paper money, flags , seals, medals, drawings, old master prints and other works of art, and printed fabrics. In this usage, obverse means the front face of the object and reverse...
is blank and suitable for engraving the recipient's name and rank.

The ribbon has a narrow red center stripe, flanked on either side by a thin white stripe, a wide stripe of dark blue, a narrow white stripe and narrow dark blue at the edge of the ribbon.

Subsequent awards of the Distinguished Flying Cross are indicated by oak leaf clusters for Army and Air Force personnel, and by award stars for members of the Navy, Marine Corps, and Coast Guard.

In the Air Force, Navy, and Marine Corps, a Combat Distinguishing Device
Valor device
The Valor device is an award of the United States military which is a bronze attachment to certain medals to indicate that it was received for valor...
(a bronze letter "V") may be awarded to represent valor (heroism) in combat. In the Army, the DFC is awarded exclusively for heroism in combat (whereas the other services may award it for "extraordinary achievement"), so no "V" device is necessary on the Army award.