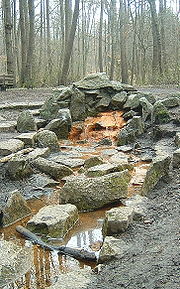 The Frankfurt City Forest or Frankfurter Stadtwald is a forest district in the south of Frankfurt am Main, Germany
Germany
Germany , officially the Federal Republic of Germany , is a federal parliamentary republic in Europe. The country consists of 16 states while the capital and largest city is Berlin. Germany covers an area of 357,021 km2 and has a largely temperate seasonal climate...
. There are also other forest areas spread out through the city.

In 1221 the emperor Frederick II
Frederick II, Holy Roman Emperor
Frederick II , was one of the most powerful Holy Roman Emperors of the Middle Ages and head of the House of Hohenstaufen. His political and cultural ambitions, based in Sicily and stretching through Italy to Germany, and even to Jerusalem, were enormous...
gave the Teutonic Knights
Teutonic Knights
The Order of Brothers of the German House of Saint Mary in Jerusalem , commonly the Teutonic Order , is a German medieval military order, in modern times a purely religious Catholic order...
large parts of the forest and the corresponding grazing rights
Grazing rights
Grazing rights is a legal term referring to the right of a user to allow their livestock to feed in a given area.- United States :...
. In 1372 Frankfurt bought the city forest from Emperor Charles IV
Charles IV, Holy Roman Emperor
Charles IV , born Wenceslaus , was the second king of Bohemia from the House of Luxembourg, and the first king of Bohemia to also become Holy Roman Emperor....
and wanted to regain these rights. This sparked a hundred year fight with the Knights, which ended with a compromise in 1484. The city paid a sum to graze sheep on the land, but the area was limited. One can still see the stones of the border on the Schäfersteinpfad, Sheep Stone Path.

The use of the forest by farmers for grazing is still evident in the names, Unterschwein- und Oberschweinstiege, which were overnight stables for the acorn and beech nut eating pigs.
The source of this article is wikipedia, the free encyclopedia.  The text of this article is licensed under the GFDL.