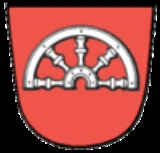 Encyclopedia
Oberrad is a district or Stadtteil of Frankfurt am Main, Germany
Germany
Germany , officially the Federal Republic of Germany , is a federal parliamentary republic in Europe. The country consists of 16 states while the capital and largest city is Berlin. Germany covers an area of 357,021 km2 and has a largely temperate seasonal climate...
. It is part of the Ortsbezirk Süd.

To the north of the district lies the River Main. Beyond it, the Eastern Harbor (Osthafen) of Frankfurt in the Ostend
Ostend (Frankfurt am Main)
Ostend is a borough of Frankfurt am Main, Germany. It is part of the Ortsbezirk Innenstadt IV, and is subdivided into 4 Stadtbezirke. It is home to several brothels located along the Main River. The most famous of these brothels, or "Puffs," is the Eros-Center with its ubiquitous "legs" entrance...
borough. To the northeast, Oberrad is bordered by Offenbach's Kaiserlei district, to the south and west lie parts of Frankfurt-Sachsenhausen
Sachsenhausen (Frankfurt am Main)
Sachsenhausen is a part of the city of Frankfurt, Germany. Composed of two districts: Sachsenhausen-Nord and Sachsenhausen-Süd, it is part of the Ortsbezirk Süd. It is located on the South bank of the Main river, right in the city center, opposite the Old Town.Sachsenhausen was founded as...
.
The source of this article is wikipedia, the free encyclopedia.  The text of this article is licensed under the GFDL.