Encyclopedia
Grazing rights is a legal term referring to the right of a user to allow their livestock
Livestock
Livestock refers to one or more domesticated animals raised in an agricultural setting to produce commodities such as food, fiber and labor. The term "livestock" as used in this article does not include poultry or farmed fish; however the inclusion of these, especially poultry, within the meaning...
to feed (graze) in a given area. 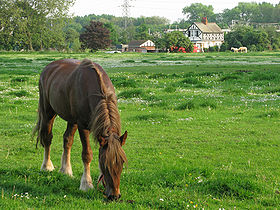 The concept of grazing rights in the United States descends directly from the English concept of the commons, a piece of land over which other people — often neighbouring landowners — could exercise one of a number of traditional rights, such as allowing their cattle to graze upon it. Prior to the mid-18th century, grazing rights in the United States were rarely disputed due to the sheer amount of open land free for the taking. However, as the population of the Western United States increased in the mid to late 19th century, range wars often erupted over ranchers' rights to graze their cattle. As more and more settlers fenced their land, free range
Free range
thumb|250px|Free-range chickens being fed outdoors.Free range is a term which outside of the United States denotes a method of farming husbandry where the animals are allowed to roam freely instead of being contained in any manner. In the United States, USDA regulations apply only to poultry and...
grazing became a thing of the past. With the introduction and growth of sheep farming, range wars often coalesced into battles between cattle ranchers and sheep ranchers, with the cattlemen alleging that the sheep, like locusts, grazed the land to excess leaving nothing for the cattle.

In 1934, the Taylor Grazing Act
Taylor Grazing Act
The Taylor Grazing Act of 1934 is a United States federal law that provides for the regulation of grazing on the public lands to improve rangeland conditions and regulate their use....
formally set out the federal government's powers and policy on grazing rights to federal lands, including the right of the government to auction off grazing rights to federal lands for a fixed period of time. Today, environmentalist
Environmentalist
An environmentalist broadly supports the goals of the environmental movement, "a political and ethical movement that seeks to improve and protect the quality of the natural environment through changes to environmentally harmful human activities"...
s have added a new wrinkle to the old debate: they are outbidding ranchers for the grazing rights to federal or state trust land, and then resting the land. This strategy has been used effectively in Arizona, Idaho, New Mexico, and Utah where arid landscapes, and their fragile ecosystems, are less able to tolerate standardized grazing techniques.

Judgment
Judgment
A judgment , in a legal context, is synonymous with the formal decision made by a court following a lawsuit. At the same time the court may also make a range of court orders, such as imposing a sentence upon a guilty defendant in a criminal matter, or providing a remedy for the plaintiff in a civil...
s about grazing rights are in Dalmatia a fundamental part of the jurisprudence
Jurisprudence
Jurisprudence is the theory and philosophy of law. Scholars of jurisprudence, or legal theorists , hope to obtain a deeper understanding of the nature of law, of legal reasoning, legal systems and of legal institutions...
. The oldest court verdict in Dalmatia in a court case about grazing rights dates from the 14th century. It is a usufruct
Usufruct
Usufruct is the legal right to use and derive profit or benefit from property that either belongs to another person or which is under common ownership, as long as the property is not damaged or destroyed...
of property
Property
Property is any physical or intangible entity that is owned by a person or jointly by a group of people or a legal entity like a corporation...
, which belongs to someone else, or it is a using of own property. The using of property of someone else needs a contract
Contract
A contract is an agreement entered into by two parties or more with the intention of creating a legal obligation, which may have elements in writing. Contracts can be made orally. The remedy for breach of contract can be "damages" or compensation of money. In equity, the remedy can be specific...
about the usufruct, but it doesn't need to be a written contract. The court may declare parts of the contract as unlawful. If there is no contract, then Common law
Common law
Common law is law developed by judges through decisions of courts and similar tribunals rather than through legislative statutes or executive branch action...
(also called case law
Case law
In law, case law is the set of reported judicial decisions of selected appellate courts and other courts of first instance which make new interpretations of the law and, therefore, can be cited as precedents in a process known as stare decisis...
) comes to apply. The decisions, about who was allowed to judge on grazing rights cases, were different in the Middle Ages
Middle Ages
The Middle Ages is a periodization of European history from the 5th century to the 15th century. The Middle Ages follows the fall of the Western Roman Empire in 476 and precedes the Early Modern Era. It is the middle period of a three-period division of Western history: Classic, Medieval and Modern...
, which reasoned in tradition
Tradition
A tradition is a ritual, belief or object passed down within a society, still maintained in the present, with origins in the past. Common examples include holidays or impractical but socially meaningful clothes , but the idea has also been applied to social norms such as greetings...
and in the natural resources in each area, such as water, meadows, lawns and others. Some peasant
Peasant
A peasant is an agricultural worker who generally tend to be poor and homeless-Etymology:The word is derived from 15th century French païsant meaning one from the pays, or countryside, ultimately from the Latin pagus, or outlying administrative district.- Position in society :Peasants typically...
s wrote their own statute
Statute
A statute is a formal written enactment of a legislative authority that governs a state, city, or county. Typically, statutes command or prohibit something, or declare policy. The word is often used to distinguish law made by legislative bodies from case law, decided by courts, and regulations...
, like Poljica republic in 1440. And some duke
Duke
A duke or duchess is a member of the nobility, historically of highest rank below the monarch, and historically controlling a duchy...
s wrote together with some peasants their own statute, like Law codex of Vinodol
Law codex of Vinodol
Law Codex of Vinodol or Vinodol statute is one of the oldest law texts written in the Croatian language. It was compiled in 1288 by a commission of 42 members in Novi Vinodolski. A paragraph was set to define the relation between the dukes and the peasantry of the region. It was written in the...
from 1288.