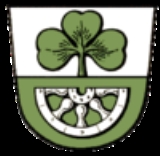 Encyclopedia
Niederrad is a district or Stadtteil of Frankfurt am Main, Germany
Germany
Germany , officially the Federal Republic of Germany , is a federal parliamentary republic in Europe. The country consists of 16 states while the capital and largest city is Berlin. Germany covers an area of 357,021 km2 and has a largely temperate seasonal climate...
with about 23.000 Inhabitants. It is part of the Ortsbezirk Süd, and is subdivided into the Stadtbezirke Niederrad-Nord and Niederrad-Süd.

The district is mainly designated as residential area. It includes the urban planners in the 1920s by Ernst May
Ernst May
Ernst May was a German architect and city planner.May successfully applied urban design techniques to the city of Frankfurt am Main during Germany's Weimar period, and in 1930 less successfully exported those ideas to Soviet Union cities, newly created under Stalinist rule...
, resulting Allotment Bruchfeldstraße and the Adolf-Miersch settlement and the settlement in the main field. The purchasing power is 22,067 euros per capita (as of 2009).

Niederrad is the site of the western part of the University Hospital Frankfurt, Frankfurt naming of some important institutions, but the racecourse Niederrad is located administratively in the district of Sachsenhausen
Sachsenhausen
Sachsenhausen may refer to:* Sachsenhausen , a quarter of Oranienburg, Germany* Sachsenhausen concentration camp, a detention and extermination facility established there in 1936...
and the Niederrad business district belongs almost exclusively to the District Schwanheim
Schwanheim
There are communes and places that have the name Schwanheim in Germany:*Schwanheim, Rhineland-Palatinate, in the Südwestpfalz district, Rhineland-Palatinate*Schwanheim , a district of Frankfurt...
, more precisely, its settlement Goldstein. Also the sewage treatment plant is located just adjacent to Niederrad Schwanheim.