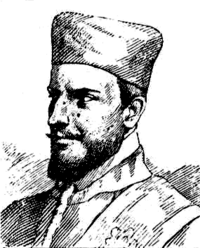 Francesco Cavalli was an Italian
Italy
Italy , officially the Italian Republic languages]] under the European Charter for Regional or Minority Languages. In each of these, Italy's official name is as follows:;;;;;;;;), is a unitary parliamentary republic in South-Central Europe. To the north it borders France, Switzerland, Austria and...
composer of the early Baroque
Baroque music
Baroque music describes a style of Western Classical music approximately extending from 1600 to 1760. This era follows the Renaissance and was followed in turn by the Classical era...
period. His real name was Pietro Francesco Caletti-Bruni, but he is better known by that of Cavalli, the name of his patron Federico Cavalli, a Venetian nobleman.

Cavalli was born at Crema
Crema, Italy
Crema is a town and comune in the province of Cremona, in the region of Lombardy in northern Italy. It is built along the river Serio at 43 km from Cremona. It is also the seat of a Catholic Bishop, who gave to Crema the title of city...
, Lombardy
Lombardy
Lombardy is one of the 20 regions of Italy. The capital is Milan. One-sixth of Italy's population lives in Lombardy and about one fifth of Italy's GDP is produced in this region, making it the most populous and richest region in the country and one of the richest in the whole of Europe...
. He became a singer at St Mark's in Venice
Venice
Venice is a city in northern Italy which is renowned for the beauty of its setting, its architecture and its artworks. It is the capital of the Veneto region...
in 1616, second organist in 1639, first organist in 1665, and in 1668 maestro di cappella. He is chiefly remembered for his operas. He began to write for the stage in 1639 (Le nozze di Teti e di Peleo
Le nozze di Teti e di Peleo
Le nozze di Teti e di Peleo is an opera by Francesco Cavalli - specifically, an opera scenica or festa teatrale. The work, set to a libretto by Orazio Persiani, was Cavalli's first opera, and was first performed at the Venetian opera house Teatro San Cassiano on 24 January 1639...
) soon after the first public opera house
Teatro San Cassiano
The Teatro San Cassiano or Teatro di San Cassiano in Venice was the first public opera house when it opened in 1637. The theatre takes its name from the neighbourhood where it was located, the parish of San Cassiano near the Rialto. It was a stone building owned by the Venetian Tron family...
opened in Venice. He established so great a reputation that he was summoned to Paris from 1660 (he revived his opera Xerxes
Xerse
Xerse is an opera by Francesco Cavalli - specifically, a dramma per musica about Xerxes I. The libretto was written by Nicolò Minato, and was later set by both Giovanni Battista Bononcini and George Frideric Handel. Minato's plot outline is loosely based on Book 7 of Herodotus's Histories...
) until 1662, producing his Ercole amante
Ercole amante
Ercole amante is an opera in a prologue and five acts by Francesco Cavalli. The Italian libretto was by Francesco Buti, based on Sophocles' The Trachiniae and on the ninth book of Ovid's Metamorphoses....
. He died in Venice at the age of 73.

Cavalli was the most influential composer in the rising genre of public opera in mid-17th century Venice
Venice
Venice is a city in northern Italy which is renowned for the beauty of its setting, its architecture and its artworks. It is the capital of the Veneto region...
. Unlike Monteverdi's
Claudio Monteverdi
Claudio Giovanni Antonio Monteverdi – 29 November 1643) was an Italian composer, gambist, and singer.Monteverdi's work, often regarded as revolutionary, marked the transition from the Renaissance style of music to that of the Baroque period. He developed two individual styles of composition – the...
early operas, scored for the extravagant court orchestra of Mantua
Mantua
Mantua is a city and comune in Lombardy, Italy and capital of the province of the same name. Mantua's historic power and influence under the Gonzaga family, made it one of the main artistic, cultural and notably musical hubs of Northern Italy and the country as a whole...
, Cavalli's operas make use of a small orchestra of strings and basso continuo to meet the limitations of public opera house
Opera house
An opera house is a theatre building used for opera performances that consists of a stage, an orchestra pit, audience seating, and backstage facilities for costumes and set building...
s.

Cavalli introduced melodious arias into his music and popular types into his libretti. His operas have a remarkably strong sense of dramatic effect as well as a great musical facility, and a grotesque humour which was characteristic of Italian grand opera down to the death of Alessandro Scarlatti
Alessandro Scarlatti
Alessandro Scarlatti was an Italian Baroque composer especially famous for his operas and chamber cantatas. He is considered the founder of the Neapolitan school of opera. He was the father of two other composers, Domenico Scarlatti and Pietro Filippo Scarlatti.-Life:Scarlatti was born in...
. Cavalli's operas provide the only example of a continuous musical development of a single composer in a single genre from the early to the late 17th century in Venice — only a few operas by others (e.g. Monteverdi and Antonio Cesti
Antonio Cesti
Antonio Cesti , known today primarily as an Italian composer of the Baroque era, he was also a singer , and organist. He was "the most celebrated Italian musician of his generation".- Biography :...
) survive. The development is particularly interesting to scholars because opera was still quite a new medium when Cavalli began working, and had matured into a popular public spectacle by the end of his career.

Cavalli wrote forty-one operas, twenty-seven of which are still extant, being preserved in the Biblioteca Nazionale Marciana
Biblioteca Marciana
The Biblioteca Nazionale Marciana is a library and Renaissance building in Venice, northern Italy; it is one of the earliest surviving public manuscript depositories in the country, holding one of the greatest classical texts collections in the world. The library is named after St. Mark, the...
(Library of St Mark) in Venice. Copies of some of the operas also exist in other locations. In addition, two last operas („Coriolano“ and „Masenzio“), which are clearly attributed to him, are lost, as well as twelve other operas have been attributed to him, though the music is lost and attribution impossible to prove.

In addition to operas, Cavalli wrote settings of the Magnificat
Magnificat
The Magnificat — also known as the Song of Mary or the Canticle of Mary — is a canticle frequently sung liturgically in Christian church services. It is one of the eight most ancient Christian hymns and perhaps the earliest Marian hymn...
in the grand Venetian polychoral style
Venetian polychoral style
The Venetian polychoral style was a type of music of the late Renaissance and early Baroque eras which involved spatially separate choirs singing in alternation...
, settings of the Marian antiphons, other sacred music in a more conservative manner (notably a Requiem Mass in eight parts [SSAATTBB], probably intended for his own funeral), and some instrumental music.