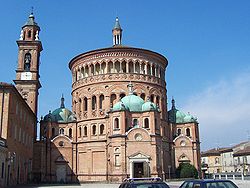 Crema is a town and comune
Comune
In Italy, the comune is the basic administrative division, and may be properly approximated in casual speech by the English word township or municipality.-Importance and function:...
in the province of Cremona
Province of Cremona
The Province of Cremona is a province in the Lombardy region of Italy. Its capital is the city of Cremona.The province has an area of 1,771 km² and in 2008 census, had a population of 358,628. There are 115 comuni...
, in the region of Lombardy
Lombardy
Lombardy is one of the 20 regions of Italy. The capital is Milan. One-sixth of Italy's population lives in Lombardy and about one fifth of Italy's GDP is produced in this region, making it the most populous and richest region in the country and one of the richest in the whole of Europe...
in northern Italy
Italy
Italy , officially the Italian Republic languages]] under the European Charter for Regional or Minority Languages. In each of these, Italy's official name is as follows:;;;;;;;;), is a unitary parliamentary republic in South-Central Europe. To the north it borders France, Switzerland, Austria and...
. It is built along the river Serio
Serio River
The Serio, in Lombard Sère, is an Italian river that flows entirely within Lombardy, crossing the provinces of Bergamo and Cremona. It is 124 kilometers long and it flows into the Adda at Bocca di Serio, to the south of Crema....
at 43 km from Cremona
Cremona
Cremona is a city and comune in northern Italy, situated in Lombardy, on the left bank of the Po River in the middle of the Pianura Padana . It is the capital of the province of Cremona and the seat of the local City and Province governments...
. It is also the seat of a Catholic
Catholic
The word catholic comes from the Greek phrase , meaning "on the whole," "according to the whole" or "in general", and is a combination of the Greek words meaning "about" and meaning "whole"...
Bishop
Bishop
A bishop is an ordained or consecrated member of the Christian clergy who is generally entrusted with a position of authority and oversight. Within the Catholic Church, Eastern Orthodox, Oriental Orthodox Churches, in the Assyrian Church of the East, in the Independent Catholic Churches, and in the...
, who gave to Crema the title of city. Crema's main economic activities traditionally relate to agriculture and cattle breeding, but Its manufactures include now cheese, iron products and cotton and wool textiles. Inhabitants are called cremaschi, singular cremasco.

Crema's origins have been linked to the Lombard
Lombards
The Lombards , also referred to as Longobards, were a Germanic tribe of Scandinavian origin, who from 568 to 774 ruled a Kingdom in Italy...
invasion of he 6th century CE, the name allegedly deriving from the Lombard term Krem meaning "little hill", though this is doubtful since it does not lie significantly above the surrounding countryside. Other linguistic roots may suggest an older origin, in particular the Indo-European root meaning a boundary (cf. Ukraine, crêt). Other authorities trace its foundation back to the 4th century CE, when Milan
Milan
Milan is the second-largest city in Italy and the capital city of the region of Lombardy and of the province of Milan. The city proper has a population of about 1.3 million, while its urban area, roughly coinciding with its administrative province and the bordering Province of Monza and Brianza ,...
was capital of the Western Roman Empire
Western Roman Empire
The Western Roman Empire was the western half of the Roman Empire after its division by Diocletian in 285; the other half of the Roman Empire was the Eastern Roman Empire, commonly referred to today as the Byzantine Empire....
. According to another version, it was instead an even more ancient Celt
Celt
The Celts were a diverse group of tribal societies in Iron Age and Roman-era Europe who spoke Celtic languages.The earliest archaeological culture commonly accepted as Celtic, or rather Proto-Celtic, was the central European Hallstatt culture , named for the rich grave finds in Hallstatt, Austria....
ic or Etruscan
Etruscan civilization
Etruscan civilization is the modern English name given to a civilization of ancient Italy in the area corresponding roughly to Tuscany. The ancient Romans called its creators the Tusci or Etrusci...
settlement.

Crema first appears in historical documents in the 11th century as a possession of the counts of Camisano. It was then ruled by Boniface
Boniface III of Tuscany
Boniface III , son of Tedald of Canossa and the father of Matilda of Canossa, was the most powerful north Italian prince of his age...
, margrave of Tuscany
Tuscany
Tuscany is a region in Italy. It has an area of about 23,000 square kilometres and a population of about 3.75 million inhabitants. The regional capital is Florence ....
, and his daughter Matilde. In 1098, Matilde gave the town as a gift to the Bishop of Cremona. During this period the prosperity of Crema's territory began as agriculture was boosted and the Humiliates' Order introduced the processing of wool, which was to be the area's main economic activity until the 19th century.

In 1159, after it had signed an alliance with Milan
Milan
Milan is the second-largest city in Italy and the capital city of the region of Lombardy and of the province of Milan. The city proper has a population of about 1.3 million, while its urban area, roughly coinciding with its administrative province and the bordering Province of Monza and Brianza ,...
against the Ghibelline Cremona, Crema was besieged
Siege of Crema
The Siege of Crema was a siege of the town of Crema, Lombardy by the Holy Roman Empire in 1159. The Cremans tried to defend their city from the German invaders, but they were eventually defeated by Frederick's men. The people who weren't killed in the siege were decapitated along with the...
, stormed and destroyed by the Emperor Frederick Barbarossa. The siege of Crema was marked by several episodes of brutality. The Germans hung some Cremaschi prisoners to their siege machines hoping the defenders would not fire against their fellows. However, this expedient did not work, and turned the battle into a slaughter.

After the Peace of Constance
Peace of Constance
The Peace of Constance of 1183 was signed in Konstanz by Frederick Barbarossa and representatives of the Lombard League. It confirmed the Peace of Venice of 1177. The Italian cities retained local jurisdiction over their territories, and had the freedom to elect their own councils and to enact...
(1185) the city was allowed to be rebuilt as a castrum ("castle"). Henry VI
Henry VI, Holy Roman Emperor
Henry VI was King of Germany from 1190 to 1197, Holy Roman Emperor from 1191 to 1197 and King of Sicily from 1194 to 1197.-Early years:Born in Nijmegen,...
gave it back to his allied Cremonese. A period as a free Commune followed, during which, however, the tendency to partisan struggles, typical of the northern Italian communes of that age, soon showed. In any case, the city was reinforced with new walls, ditches and gates (1199), and a network of canals further improved agriculture. In the 13th century Crema was also enriched with its famous Cathedral and the Palazzo Pretorio.

The communal independence ended in 1335, when the city surrendered to Gian Galeazzo Visconti
Gian Galeazzo Visconti
Gian Galeazzo Visconti , son of Galeazzo II Visconti and Bianca of Savoy, was the first Duke of Milan and ruled the late-medieval city just before the dawn of the Renaissance...
, whose family held the city until the end of the century. In 1361 Crema was touched by the Black Death
Black Death
The Black Death was one of the most devastating pandemics in human history, peaking in Europe between 1348 and 1350. Of several competing theories, the dominant explanation for the Black Death is the plague theory, which attributes the outbreak to the bacterium Yersinia pestis. Thought to have...
. A brief period of rule by the Guelph Benzoni family followed (Bartolomeo and Paolo from 1403 to 1405, then their nephew Giorgio until 1423). The seignory passed again to the Visconti, and, from 1449 onwards, to the Republic of Venice
Republic of Venice
The Republic of Venice or Venetian Republic was a state originating from the city of Venice in Northeastern Italy. It existed for over a millennium, from the late 7th century until 1797. It was formally known as the Most Serene Republic of Venice and is often referred to as La Serenissima, in...
.

As a Venetian inland province, Crema obtained numerous privileges and was safe from the economic decline of the nearby Duchy of Milan
Duchy of Milan
The Duchy of Milan , was created on the 1st of may 1395, when Gian Galeazzo Visconti, Lord of Milan, purchased a diploma for 100,000 Florins from King Wenceslaus. It was this diploma that installed, Gian Galeazzo as Duke of Milan and Count of Pavia...
under the Spanish rule. It kept a substantial autonomy, which allowed a program of new buildings. These included a new line of walls, the rebuilding of the Palazzo Comunale (1525–1533), the Palazzo della Notaria, now Palazzo Vescovile.

The 17th century saw the beginning of the decadence of the city, caused by the decline of its industrial activities, although agriculture continued to flourish. In 1796 an Academy of Agriculture was founded. After the fall of the Republic of Venice in 1797, the French army deposed the last podestà and created a municipality. At first Crema formed the province of Crema-Lodi, but later it was annexed to the province of Cremona. In 1814, Napoleon’s Empire fell apart, and Crema became an Austria
Austria
Austria , officially the Republic of Austria , is a landlocked country of roughly 8.4 million people in Central Europe. It is bordered by the Czech Republic and Germany to the north, Slovakia and Hungary to the east, Slovenia and Italy to the south, and Switzerland and Liechtenstein to the...
n possession.

Crema was annexed to Italy in the Risorgimento. Thenceforth it was a part of the Kingdom of Italy and, after 1946, of the Italian Republic.