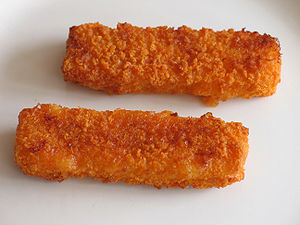 Fish fingers, known as fish sticks in North America, are a processed food
Food processing
Food processing is the set of methods and techniques used to transform raw ingredients into food or to transform food into other forms for consumption by humans or animals either in the home or by the food processing industry...
made using a whitefish
Freshwater whitefish
The freshwater whitefish are fish of the subfamily Coregoninae in the salmon family Salmonidae. Along with the freshwater whitefish, the Salmonidae includes the freshwater and anadromous trout and salmon species as well as graylings...
such as cod
Cod
Cod is the common name for genus Gadus, belonging to the family Gadidae, and is also used in the common name for various other fishes. Cod is a popular food with a mild flavor, low fat content and a dense, flaky white flesh. Cod livers are processed to make cod liver oil, an important source of...
, haddock
Haddock
The haddock , also known as the offshore hake, is a marine fish distributed on both sides of the North Atlantic. Haddock is a popular food fish and is widely fished commercially....
or pollock
Pollock
Pollock is the common name used for either of the two species of marine fish in the Pollachius genus. Both P. pollachius and P. virens are commonly referred to as pollock. Other names for P...
which have been batter
Batter (cooking)
Batter is a semi-liquid mixture of one or more flours combined with liquids such as water, milk or eggs used to prepare various foods. Often a leavening agent such as baking powder is included to aerate and fluff up the batter as it cooks, or the mixture may be naturally fermented for this purpose...
ed or breaded.

They are commonly available in the frozen food
Frozen food
Freezing food preserves it from the time it is prepared to the time it is eaten. Since early times, farmers, fishermen, and trappers have preserved their game and produce in unheated buildings during the winter season. Freezing food slows down decomposition by turning water to ice, making it...
section of supermarket
Supermarket
A supermarket, a form of grocery store, is a self-service store offering a wide variety of food and household merchandise, organized into departments...
s, and on children's menus in family-oriented restaurants. They can be baked in the oven, grilled, shallow fried, or deep-fried.

In the United Kingdom in the 1930s, most of the herring
Herring
Herring is an oily fish of the genus Clupea, found in the shallow, temperate waters of the North Pacific and the North Atlantic oceans, including the Baltic Sea. Three species of Clupea are recognized. The main taxa, the Atlantic herring and the Pacific herring may each be divided into subspecies...
catch was pickled and exported to other Northern Europe
Northern Europe
Northern Europe is the northern part or region of Europe. Northern Europe typically refers to the seven countries in the northern part of the European subcontinent which includes Denmark, Estonia, Latvia, Lithuania, Norway, Finland and Sweden...
an countries. In an attempt to make herring more appealing on the home market, companies tried to present it in a new way, creating herring fish fingers called “herring savouries” and were tested on the market against a bland control product of cod
Cod
Cod is the common name for genus Gadus, belonging to the family Gadidae, and is also used in the common name for various other fishes. Cod is a popular food with a mild flavor, low fat content and a dense, flaky white flesh. Cod livers are processed to make cod liver oil, an important source of...
sticks, sold as “fish fingers.” Shoppers in Southampton and South Wales, where the test was conducted, confounded expectations by showing an overwhelming preference for the cod. Cod fish fingers were first produced in Great Yarmouth
Great Yarmouth
Great Yarmouth, often known to locals as Yarmouth, is a coastal town in Norfolk, England. It is at the mouth of the River Yare, east of Norwich.It has been a seaside resort since 1760, and is the gateway from the Norfolk Broads to the sea...
, and introduced in Britain on 26 September 1955.

In 1953, the American company Gorton-Pew Fisheries, now known as Gorton's
Gorton's of Gloucester
Gorton’s of Gloucester is a subsidiary of the Japanese seafood conglomerate Nippon Suisan Kaisha, Ltd., producing fishsticks and other frozen seafood for the retail market in the United States. Gorton’s also has a North American foodservice business which sells to fast-food restaurants such as...
, was the first company to introduce a frozen ready-to-cook fish finger, named Gorton’s Fish Sticks, which won the Parents Magazine Seal of Approval.

The fish used may be either fillets cut to shape or minced/ground fish reformed to shape. Those made entirely from fillets are generally regarded as the higher quality products and will typically have a prominent sign on the box stating that the fish is 100% fillet. Minced fish is more commonly used in store brand
Store brand
Store brands are a line of products sold by a retailer under a single marketing identity. They bear a similarity to the concept of House brands, Private label brands in the United States, own brands in the UK, and home brands in Australia and generic brands...
economy products.

In addition to white fish, fish fingers are sometimes made with salmon
Salmon
Salmon is the common name for several species of fish in the family Salmonidae. Several other fish in the same family are called trout; the difference is often said to be that salmon migrate and trout are resident, but this distinction does not strictly hold true...
.
A commercially available variant of fish fingers is Omega 3 fish fingers, which are high in Omega 3.

In Doctor Who
Doctor Who
Doctor Who is a British science fiction television programme produced by the BBC. The programme depicts the adventures of a time-travelling humanoid alien known as the Doctor who explores the universe in a sentient time machine called the TARDIS that flies through time and space, whose exterior...
the Eleventh Doctor
Eleventh Doctor
The Eleventh Doctor is the eleventh incarnation of the protagonist of the BBC television science-fiction series Doctor Who. Matt Smith plays this incarnation, replacing David Tennant's Tenth Doctor in the 2010 episode "The End of Time, Part Two"...
eats fish fingers dipped in custard after regenerating.
The source of this article is wikipedia, the free encyclopedia.  The text of this article is licensed under the GFDL.