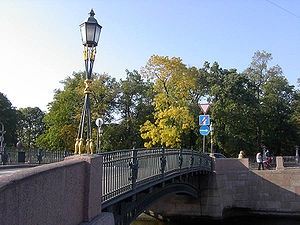 The original small wooden bridge, called the Summer Bridge and rumored to have been designed by the architect Bartolomeo Rastrelli
Bartolomeo Rastrelli
Francesco Bartolomeo Rastrelli was an Italian architect naturalized Russian. He developed an easily recognizable style of Late Baroque, both sumptuous and majestic...
, was built in the 1760s. This bridge was replaced with the current cast-iron bridge, in 1824-1825, and renamed the First Engineer Bridge, in 1829, after the nearby Engineers' Castle (originally called St Michael's or Mikhailovsky Castle).

Engineer Pierre-Dominique Bazaine
Pierre-Dominique Bazaine
Pierre-Dominique Bazaine was a French scientist and engineer. He was educated at the École Polytechnique in Paris as an engineer...
(1786-1838) (Пётр Петрович Базен) designed and constructed the bridge in a similar fashion to the Big Stables Bridge (Bolshoy Konyushenny Bridge), a bridge located further west on the Moika River, using pre-fabricated hollow wedges. Bazaine also managed to reduce the use of expensive cast-iron in the bridge's construction to one-third of the total mass of the bridge, by innovatively designing the sidewalks with the use of special bracket
Bracket (architecture)
A bracket is an architectural member made of wood, stone, or metal that overhangs a wall to support or carry weight. It may also support a statue, the spring of an arch, a beam, or a shelf. Brackets are often in the form of scrolls, and can be carved, cast, or molded. They can be entirely...
supports.

The siding is decorated in Doric style by architect Joseph Charlemagne. The beams have a curved and perforated appearance, and the bridge's rectangular orifice
Orifice
An orifice is any opening, mouth, hole or vent, as of a pipe, plate, or a body.* Body orifice* Orifice plate* Calibrated orifice* Nozzle* Back Orifice-See also:* Choked flow* Needle valve* Venturi effect* Flow measurement...
s are bordered with flat frames, giving the bridge an appearance of lightness and transparency. The bridge's sidewalk tiles were designed as a cornice
Cornice
Cornice molding is generally any horizontal decorative molding that crowns any building or furniture element: the cornice over a door or window, for instance, or the cornice around the edge of a pedestal. A simple cornice may be formed just with a crown molding.The function of the projecting...
and are supported by rich ornamental bracket figures. Intricately inscribed plaques with grooves extend from the figures on frieze planes, in the style of Doric triglyph
Triglyph
Triglyph is an architectural term for the vertically channeled tablets of the Doric frieze, so called because of the angular channels in them, two perfect and one divided, the two chamfered angles or hemiglyphs being reckoned as one. The square recessed spaces between the triglyphs on a Doric...
coverings. The triglyphs cover the joints of the side plaques. Cast-iron arches span closely behind. The railings, also designed by Charlemagne, comprise several sections of short pilum
Pilum
The pilum was a javelin commonly used by the Roman army in ancient times. It was generally about two metres long overall, consisting of an iron shank about 7 mm in diameter and 60 cm long with pyramidal head...
s, placed between bouquets of decorations and inscriptions of round shields, with bas-relief images of the heads of Medusa
Medusa
In Greek mythology Medusa , " guardian, protectress") was a Gorgon, a chthonic monster, and a daughter of Phorcys and Ceto. The author Hyginus, interposes a generation and gives Medusa another chthonic pair as parents. Gazing directly upon her would turn onlookers to stone...
, with the Gorgon's
Gorgon
In Greek mythology, the Gorgon was a terrifying female creature. The name derives from the Greek word gorgós, which means "dreadful." While descriptions of Gorgons vary across Greek literature, the term commonly refers to any of three sisters who had hair of living, venomous snakes, and a...
snaky locks for hair.