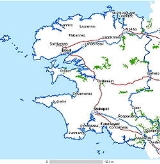 Encyclopedia
Finistère is a département of France
France
The French Republic , The French Republic , The French Republic , (commonly known as France , is a unitary semi-presidential republic in Western Europe with several overseas territories and islands located on other continents and in the Indian, Pacific, and Atlantic oceans. Metropolitan France...
, in the extreme west of Brittany
Brittany
Brittany is a cultural and administrative region in the north-west of France. Previously a kingdom and then a duchy, Brittany was united to the Kingdom of France in 1532 as a province. Brittany has also been referred to as Less, Lesser or Little Britain...
.

The name Finistère derives from the Latin Finis Terræ, meaning end of the earth, and may be compared with Land's End
Land's End
Land's End is a headland and small settlement in west Cornwall, England, within the United Kingdom. It is located on the Penwith peninsula approximately eight miles west-southwest of Penzance....
on the opposite side of the English Channel
English Channel
The English Channel , often referred to simply as the Channel, is an arm of the Atlantic Ocean that separates southern England from northern France, and joins the North Sea to the Atlantic. It is about long and varies in width from at its widest to in the Strait of Dover...
. The Breton name for Finistère Penn ar Bedd translates as Head/End of the World and is cognate with the Cornish equivalent for Land's End Pen-an-Wlas (Head/End of the country). Finistère is not to be confused with Finisterre
Finisterre
Finisterre, Finisterra, Fisterra, or Finistère may refer to:Places* Cape Finisterre , headland in Galicia, north-west Spain, the Southern landfall of the Bay of Biscay...
in Spain
Spain
Spain , officially the Kingdom of Spain languages]] under the European Charter for Regional or Minority Languages. In each of these, Spain's official name is as follows:;;;;;;), is a country and member state of the European Union located in southwestern Europe on the Iberian Peninsula...
.

The present department consists of the historical region of Léon
Leon
-Europe:* Kingdom of León, an independent state in the Iberian Peninsula from 910 to 1230 and again from 1296 to 1301* Viscounty of Léon, a feudal state in France during the 11th to 13th centuries* Léon, Landes, a commune in France* Isla de León, a Spanish island...
and parts of Cornouaille
Cornouaille
Cornouaille is a historic region in Brittany, in northwest France. The name is identical to the French name for the Duchy of Cornwall, since the area was settled by migrant princes from Cornwall...
and Trégor
Trégor
Trégor is one of the nine provinces of Brittany, in its northwestern area. It comprises the western part of the department of Côtes-d'Armor and a small part of the northeast of Finistère, as far as the river Morlaix...
.

The largest population center in Finistère is Brest
Brest, France
Brest is a city in the Finistère department in Brittany in northwestern France. Located in a sheltered position not far from the western tip of the Breton peninsula, and the western extremity of metropolitan France, Brest is an important harbour and the second French military port after Toulon...
. Other large towns in the department include Quimper (the capital), Morlaix
Morlaix
Morlaix is a commune in the Finistère department of Brittany in northwestern France. It is a sub-prefecture of the department.-Leisure and tourism:...
, Carhaix, and Douarnenez. Finistère includes the island of Ushant
Ushant
Ushant is an island at the south-western end of the English Channel which marks the north-westernmost point of metropolitan France. It belongs to Brittany and is in the traditional region of Bro-Leon. Administratively, Ushant is a commune in the Finistère department...
(Eusa in Breton
Breton language
Breton is a Celtic language spoken in Brittany , France. Breton is a Brythonic language, descended from the Celtic British language brought from Great Britain to Armorica by migrating Britons during the Early Middle Ages. Like the other Brythonic languages, Welsh and Cornish, it is classified as...
, Ouessant in French
French language
French is a Romance language spoken as a first language in France, the Romandy region in Switzerland, Wallonia and Brussels in Belgium, Monaco, the regions of Quebec and Acadia in Canada, and by various communities elsewhere. Second-language speakers of French are distributed throughout many parts...
). 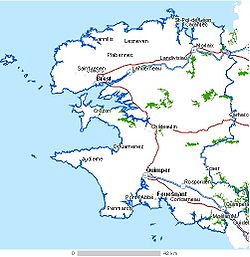 The abers, rugged fjord-like inlets on the north coast, are a notable feature of the landscape.

The westernmost point of continental France, known as the Pointe de Corsen
Pointe de Corsen
The Pointe de Corsen is the westernmost point of continental France, located west of Brest in the Plouarzel Commune, Finistère, Brittany. The nearest village is Ruscumunoc.A CROSS sea monitoring site is located at the point.Pointe de Corsen is located at...
, extends from the northwestern tip of Finistère. A few miles to the south is the slightly less westerly, but rugged and isolated, headland of Pointe du Raz
Pointe du Raz
The Pointe du Raz is a promontory that extends into the Atlantic from western Brittany, in France. The local Breton name is Beg ar Raz. It is the western point of the commune of Plogoff, Finistère....
.

Agriculture
Agriculture
Agriculture is the cultivation of animals, plants, fungi and other life forms for food, fiber, and other products used to sustain life. Agriculture was the key implement in the rise of sedentary human civilization, whereby farming of domesticated species created food surpluses that nurtured the...
, food processing
Food processing
Food processing is the set of methods and techniques used to transform raw ingredients into food or to transform food into other forms for consumption by humans or animals either in the home or by the food processing industry...
and various related industries occupy an important place in Finistère's economy.

The military presence in Finistère (Île Longue
Île Longue
Île Longue is a peninsula of the roadstead of Brest. It is the base of the SNLE, the French ballistic missile submarines, and as such one of the most secretive and heavily defended places in France.-Geography:...
nuclear submarine
Submarine
A submarine is a watercraft capable of independent operation below the surface of the water. It differs from a submersible, which has more limited underwater capability...
base; Naval Air base of Lanvéoc-Poulmic), as well as military-related industries such as the Brest headquarters of DCNS employ a significant number of the départements population.

The port of Roscoff
Roscoff
Roscoff is a commune in the Finistère department of Brittany in northwestern France.The nearby Île de Batz, called Enez Vaz in Breton, is a small island that can be reached by launch from the harbour....
links Brittany by ferry
Ferry
A ferry is a form of transportation, usually a boat, but sometimes a ship, used to carry primarily passengers, and sometimes vehicles and cargo as well, across a body of water. Most ferries operate on regular, frequent, return services...
with Ireland
Ireland
Ireland is an island to the northwest of continental Europe. It is the third-largest island in Europe and the twentieth-largest island on Earth...
and Great Britain
Great Britain
Great Britain or Britain is an island situated to the northwest of Continental Europe. It is the ninth largest island in the world, and the largest European island, as well as the largest of the British Isles...
.

Finistère is the area where Breton
Breton language
Breton is a Celtic language spoken in Brittany , France. Breton is a Brythonic language, descended from the Celtic British language brought from Great Britain to Armorica by migrating Britons during the Early Middle Ages. Like the other Brythonic languages, Welsh and Cornish, it is classified as...
survives most strongly as a spoken language. Breton-speaking schools are called Diwan
Diwan (school)
Diwan is a federation of Breton language-medium schools in Brittany .-Concept:The Diwan concept, which allows children to learn French and Breton through immersion was inspired by the Gaelscoileanna movement in Ireland, Ikastolak movement in the Basque Country and the Mudiad Ysgolion Meithrin...
, Divyezh and Dihun.

The Festival de Cornouaille
Cornouaille
Cornouaille is a historic region in Brittany, in northwest France. The name is identical to the French name for the Duchy of Cornwall, since the area was settled by migrant princes from Cornwall...
, which takes place in Quimper, is a celebration of Breton music
Music of Brittany
Since the early 1970s, Brittany has experienced a tremendous revival of its folk music. Along with flourishing traditional forms such as the bombard-binou pair and fest-noz ensembles incorporating other additional instruments, it has also branched out into numerous sub-genres...
and traditions.

One of the highlights of summer in Finistère is the "Festival des Vieilles Charrues
Vieilles Charrues Festival
The Vieilles Charrues Festival is held every year in mid-July in the city of Carhaix located in the west of Brittany.This festival is the largest music festival in France, attracting more than 200,000 festival-goers every year . This festival was created in 1992 in Landeleau, a small village in...
" held in Carhaix-Plouguer where major international stars attract tens of thousands of spectators. http://www.vieillescharrues.asso.fr/

General Council website Prefecture website
Finistère Tourisme, agence de développement touristique du Finistère
The source of this article is wikipedia, the free encyclopedia.  The text of this article is licensed under the GFDL.