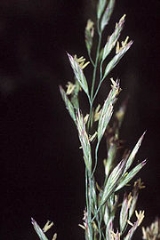 Encyclopedia
Festuce is a genus
Genus
In biology, a genus is a low-level taxonomic rank used in the biological classification of living and fossil organisms, which is an example of definition by genus and differentia...
of about 300 species
Species
In biology, a species is one of the basic units of biological classification and a taxonomic rank. A species is often defined as a group of organisms capable of interbreeding and producing fertile offspring. While in many cases this definition is adequate, more precise or differing measures are...
of perennial
Perennial plant
A perennial plant or simply perennial is a plant that lives for more than two years. The term is often used to differentiate a plant from shorter lived annuals and biennials. The term is sometimes misused by commercial gardeners or horticulturalists to describe only herbaceous perennials...
tufted grass
Grass
Grasses, or more technically graminoids, are monocotyledonous, usually herbaceous plants with narrow leaves growing from the base. They include the "true grasses", of the Poaceae family, as well as the sedges and the rushes . The true grasses include cereals, bamboo and the grasses of lawns ...
es, belonging to the grass family
Family (biology)
In biological classification, family is* a taxonomic rank. Other well-known ranks are life, domain, kingdom, phylum, class, order, genus, and species, with family fitting between order and genus. As for the other well-known ranks, there is the option of an immediately lower rank, indicated by the...
Poaceae
Poaceae
The Poaceae is a large and nearly ubiquitous family of flowering plants. Members of this family are commonly called grasses, although the term "grass" is also applied to plants that are not in the Poaceae lineage, including the rushes and sedges...
(subfamily Pooideae
Pooideae
The Pooideae is a subfamily of the true grass family Poaceae. It includes some major cereals such as wheat, barley, oat, rye and many lawn and pasture grasses.- List :...
). The genus has a cosmopolitan distribution
Cosmopolitan distribution
In biogeography, a taxon is said to have a cosmopolitan distribution if its range extends across all or most of the world in appropriate habitats. For instance, the killer whale has a cosmopolitan distribution, extending over most of the world's oceans. Other examples include humans, the lichen...
, although the majority of the species are found in cool temperate areas. The genus is closely related to ryegrass
Ryegrass
Ryegrass is a genus of nine species of tufted grasses in the Pooideae subfamily of the Poaceae family. Also called tares , these plants are native to Europe, Asia and northern Africa, but are...
(Lolium), and recent evidence from phylogenetic studies using DNA sequencing
DNA sequencing
DNA sequencing includes several methods and technologies that are used for determining the order of the nucleotide bases—adenine, guanine, cytosine, and thymine—in a molecule of DNA....
of plant mitochondrial DNA
DNA
Deoxyribonucleic acid is a nucleic acid that contains the genetic instructions used in the development and functioning of all known living organisms . The DNA segments that carry this genetic information are called genes, but other DNA sequences have structural purposes, or are involved in...
shows that the genus lacks monophyly
Monophyly
In common cladistic usage, a monophyletic group is a taxon which forms a clade, meaning that it contains all the descendants of the possibly hypothetical closest common ancestor of the members of the group. The term is synonymous with the uncommon term holophyly...
. As a result plant taxonomists have placed several species, including the forage grasses, tall fescue and meadow fescue, formerly belonging to the genus Festuca into the genus Lolium.

Fescues range from small grasses only 10 cm tall or less with very fine thread-like leaves
Leaf
A leaf is an organ of a vascular plant, as defined in botanical terms, and in particular in plant morphology. Foliage is a mass noun that refers to leaves as a feature of plants....
less than 1 mm wide, to tall grasses up to 2 m tall with large leaves up to 60 cm (2 ft) long and 2 cm (3/4 in.) broad.

Fescue pollen
Pollen
Pollen is a fine to coarse powder containing the microgametophytes of seed plants, which produce the male gametes . Pollen grains have a hard coat that protects the sperm cells during the process of their movement from the stamens to the pistil of flowering plants or from the male cone to the...
is a significant contributor to hay fever
Hay Fever
Hay Fever is a comic play written by Noël Coward in 1924 and first produced in 1925 with Marie Tempest as the first Judith Bliss. Laura Hope Crews played the role in New York...
.

The fescues contain some species which are important grasses for both lawn
Lawn
A lawn is an area of aesthetic and recreational land planted with grasses or other durable plants, which usually are maintained at a low and consistent height. Low ornamental meadows in natural landscaping styles are a contemporary option of a lawn...
s (particularly the fine-leaved species, highly valued for bowling green
Bowling green
A bowling green is a finely-laid, close-mown and rolled stretch of lawn for playing the game of lawn bowls.Before 1830, when Edwin Beard Budding invented the lawnmower, lawns were often kept cropped by grazing sheep on them...
s) and as pasture
Pasture
Pasture is land used for grazing. Pasture lands in the narrow sense are enclosed tracts of farmland, grazed by domesticated livestock, such as horses, cattle, sheep or swine. The vegetation of tended pasture, forage, consists mainly of grasses, with an interspersion of legumes and other forbs...
and hay
Hay
Hay is grass, legumes or other herbaceous plants that have been cut, dried, and stored for use as animal fodder, particularly for grazing livestock such as cattle, horses, goats, and sheep. Hay is also fed to pets such as rabbits and guinea pigs...
for livestock
Livestock
Livestock refers to one or more domesticated animals raised in an agricultural setting to produce commodities such as food, fiber and labor. The term "livestock" as used in this article does not include poultry or farmed fish; however the inclusion of these, especially poultry, within the meaning...
, being a highly nutritious stock feed. Fescues are also quite common on golf courses of the coastal U.S. and the U.K., usually beyond the second cut in the rough. They are also used in soil
Soil
Soil is a natural body consisting of layers of mineral constituents of variable thicknesses, which differ from the parent materials in their morphological, physical, chemical, and mineralogical characteristics...
erosion
Erosion
Erosion is when materials are removed from the surface and changed into something else. It only works by hydraulic actions and transport of solids in the natural environment, and leads to the deposition of these materials elsewhere...
control programs, most notably tall fescue, one cultivar of which, Kentucky 31 (Festuca arundinacea
Festuca arundinacea
Festuca arundinacea is a species of fescue commonly known as Tall fescue. It is a cool-season perennial C3 species of bunchgrass native to Europe. It is an important forage grass throughout Europe, and many cultivars have been used in agriculture...
), was used in land reclamation during the dust bowl
Dust Bowl
The Dust Bowl, or the Dirty Thirties, was a period of severe dust storms causing major ecological and agricultural damage to American and Canadian prairie lands from 1930 to 1936...
period in the 1930s in the US.

Fescue is sometimes used as feed for horse
Horse
The horse is one of two extant subspecies of Equus ferus, or the wild horse. It is a single-hooved mammal belonging to the taxonomic family Equidae. The horse has evolved over the past 45 to 55 million years from a small multi-toed creature into the large, single-toed animal of today...
s. However, fescue poisoning, which results from ergot alkaloids produced by an endophytic fungus
Neotyphodium coenophialum
Neotyphodium coenophialum is a systemic and seed-transmissible symbiont of Schedonorus arundinaceus , a grass endemic to Eurasia and North Africa, but widely naturalized in North America, Australia and New Zealand / Aotearoa...
, is a risk for pregnant mares
Mare (horse)
A mare is an adult female horse or other equine.In most cases, a mare is a female horse over the age of three, and a filly is a female horse age three and younger. However, in Thoroughbred horse racing, a mare is defined as a female horse more than four years old; in harness racing a mare is a...
. Occurring in the last three months of pregnancy, fescue poisoning increases the risk of spontaneous abortion, stillbirths, retained placenta, absent milk production, and prolonged pregnancy. Fescue Toxicosis of livestock can require a farmer to seek costly treatment for his animals. Incorporating legumes into the fescue can be a way to increase livestock gains and conception rates, even if the fescue is infected.

Proposed for inclusion in genus Lolium

In a 2011 ESPN College GameDay television commercial, Lee Corso
Lee Corso
Leland "Lee" Corso is a sports broadcaster and football analyst for ESPN. He has been featured on ESPN's College GameDay program since its inception and he appeared annually as a commentator in EA Sports' NCAA Football through NCAA Football 11...
eats fescue grass after coach Les Miles
Les Miles
Leslie Edwin "Les" Miles, nicknamed "The Mad Hatter", is an American college football coach and the current head coach of the Louisiana State University football team. Prior to holding that position, he was head coach at Oklahoma State...
tells Chris Fowler
Chris Fowler
Chris Fowler is a sports broadcaster for ESPN known best for his work on College GameDay for college football. Since 1989, Fowler has been the primary studio host for college football. Until 2006, he was also the lead studio host for men's college basketball on ESPN...
and Kirk Herbstreit
Kirk Herbstreit
Kirk Herbstreit is an Emmy Award-winning analyst for ESPN's College GameDay, a television program covering college football and a provider of color commentary during college football games on ESPN and ABC. He appears annually as a commentator in EA Sports' NCAA Football. He was a quarterback on...
that he eats the grass of every field he plays on because it makes him "one with the field."