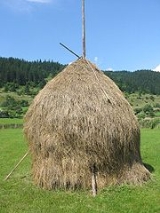 Overview
Hay is grass
Grass
Grasses, or more technically graminoids, are monocotyledonous, usually herbaceous plants with narrow leaves growing from the base. They include the "true grasses", of the Poaceae family, as well as the sedges and the rushes . The true grasses include cereals, bamboo and the grasses of lawns ...
, legumes or other herbaceous plant
Herbaceous plant
A herbaceous plant is a plant that has leaves and stems that die down at the end of the growing season to the soil level. They have no persistent woody stem above ground...
s that have been cut, dried, and stored for use as animal fodder
Fodder
Fodder or animal feed is any agricultural foodstuff used specifically to feed domesticated livestock such as cattle, goats, sheep, horses, chickens and pigs. Most animal feed is from plants but some is of animal origin...
, particularly for grazing livestock
Livestock
Livestock refers to one or more domesticated animals raised in an agricultural setting to produce commodities such as food, fiber and labor. The term "livestock" as used in this article does not include poultry or farmed fish; however the inclusion of these, especially poultry, within the meaning...
such as cattle
Cattle
Cattle are the most common type of large domesticated ungulates. They are a prominent modern member of the subfamily Bovinae, are the most widespread species of the genus Bos, and are most commonly classified collectively as Bos primigenius...
, horses, goats, and sheep. Hay is also fed to pets such as rabbit
Rabbit
Rabbits are small mammals in the family Leporidae of the order Lagomorpha, found in several parts of the world...
s and guinea pig
Guinea pig
The guinea pig , also called the cavy, is a species of rodent belonging to the family Caviidae and the genus Cavia. Despite their common name, these animals are not in the pig family, nor are they from Guinea...
s. Pigs
PIGS
PIGS is a four letter acronym that can stand for:* PIGS , Phosphatidylinositol glycan anchor biosynthesis, class S, a human gene* PIGS , the economies of Portugal, Italy , Greece and Spain...
may be fed hay, but they do not digest it as efficiently as more fully herbivorous
Herbivore
Herbivores are organisms that are anatomically and physiologically adapted to eat plant-based foods. Herbivory is a form of consumption in which an organism principally eats autotrophs such as plants, algae and photosynthesizing bacteria. More generally, organisms that feed on autotrophs in...
animals.

Hay is fed when or where there is not enough pasture
Pasture
Pasture is land used for grazing. Pasture lands in the narrow sense are enclosed tracts of farmland, grazed by domesticated livestock, such as horses, cattle, sheep or swine. The vegetation of tended pasture, forage, consists mainly of grasses, with an interspersion of legumes and other forbs...
or rangeland
Rangeland
Rangelands are vast natural landscapes in the form of grasslands, shrublands, woodlands, wetlands, and deserts. Types of rangelands include tallgrass and shortgrass prairies, desert grasslands and shrublands, woodlands, savannas, chaparrals, steppes, and tundras...
on which to graze an animal, when grazing is unavailable due to weather (such as during the winter) or when lush pasture by itself is too rich for the health of the animal.

I am very curious about Fescue hay. I know that you are not supposed to graze pregnant horses on it. Can anyone tell me if it is ok to feed it in ha...
More
x