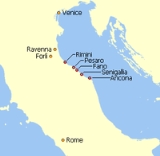 Encyclopedia
A pentapolis, from the Greek
Greek language
Greek is an independent branch of the Indo-European family of languages. Native to the southern Balkans, it has the longest documented history of any Indo-European language, spanning 34 centuries of written records. Its writing system has been the Greek alphabet for the majority of its history;...
words (pente), "five" and (polis
Polis
Polis , plural poleis , literally means city in Greek. It could also mean citizenship and body of citizens. In modern historiography "polis" is normally used to indicate the ancient Greek city-states, like Classical Athens and its contemporaries, so polis is often translated as "city-state."The...
), "city(-state)" is a geographic and/or institutional grouping of five cities. This was probably done in the ancient world for political, commercial and military reasons like happen later with the UK's Cinque Ports
Cinque Ports
The Confederation of Cinque Ports is a historic series of coastal towns in Kent and Sussex. It was originally formed for military and trade purposes, but is now entirely ceremonial. It lies at the eastern end of the English Channel, where the crossing to the continent is narrowest...
. 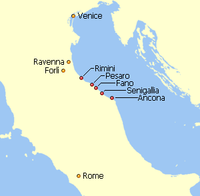