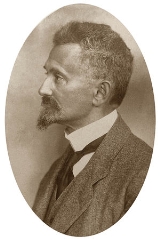 Encyclopedia
Felix Hausdorff was a Jewish German mathematician
Mathematician
A mathematician is a person whose primary area of study is the field of mathematics. Mathematicians are concerned with quantity, structure, space, and change....
who is considered to be one of the founders of modern topology
Topology
Topology is a major area of mathematics concerned with properties that are preserved under continuous deformations of objects, such as deformations that involve stretching, but no tearing or gluing...
and who contributed significantly to set theory
Set theory
Set theory is the branch of mathematics that studies sets, which are collections of objects. Although any type of object can be collected into a set, set theory is applied most often to objects that are relevant to mathematics...
, descriptive set theory
Descriptive set theory
In mathematical logic, descriptive set theory is the study of certain classes of "well-behaved" subsets of the real line and other Polish spaces...
, measure theory, function theory, and functional analysis
Functional analysis
Functional analysis is a branch of mathematical analysis, the core of which is formed by the study of vector spaces endowed with some kind of limit-related structure and the linear operators acting upon these spaces and respecting these structures in a suitable sense...
.

Hausdorff studied at the University of Leipzig
University of Leipzig
The University of Leipzig , located in Leipzig in the Free State of Saxony, Germany, is one of the oldest universities in the world and the second-oldest university in Germany...
, obtaining his Ph.D. in 1891. He taught mathematics in Leipzig until 1910, when he became professor of mathematics at the University of Bonn
University of Bonn
The University of Bonn is a public research university located in Bonn, Germany. Founded in its present form in 1818, as the linear successor of earlier academic institutions, the University of Bonn is today one of the leading universities in Germany. The University of Bonn offers a large number...
. He was professor at the University of Greifswald from 1913 to 1921. He then returned to Bonn. When the Nazis
Nazism
Nazism, the common short form name of National Socialism was the ideology and practice of the Nazi Party and of Nazi Germany...
came to power, Hausdorff, who was Jewish, felt that as a respected university professor he would be spared from persecution. However, his abstract mathematics was denounced as "Jewish", useless, and "un-German
Ludwig Bieberbach
Ludwig Georg Elias Moses Bieberbach was a German mathematician.-Biography:Born in Goddelau, near Darmstadt, he studied at Heidelberg and under Felix Klein at Göttingen, receiving his doctorate in 1910. His dissertation was titled On the theory of automorphic functions...
" and he lost his position in 1935. Though he could no longer publish in Germany, Hausdorff continued to be an active research mathematician, publishing in the Polish
Polish language
Polish is a language of the Lechitic subgroup of West Slavic languages, used throughout Poland and by Polish minorities in other countries...
journal Fundamenta Mathematicae
Fundamenta Mathematicae
Fundamenta Mathematicae is a scientific journal of mathematics with a special focus on the foundations of mathematics. At present, it concentrates on papers devoted to set theory, mathematical logic, topology and its interactions with algebra, and dynamical systems...
. After Kristallnacht
Kristallnacht
Kristallnacht, also referred to as the Night of Broken Glass, and also Reichskristallnacht, Pogromnacht, and Novemberpogrome, was a pogrom or series of attacks against Jews throughout Nazi Germany and parts of Austria on 9–10 November 1938.Jewish homes were ransacked, as were shops, towns and...
in 1938 as persecution of Jews escalated, Hausdorff became more and more isolated. He wrote to George Pólya
George Pólya
George Pólya was a Hungarian mathematician. He was a professor of mathematics from 1914 to 1940 at ETH Zürich and from 1940 to 1953 at Stanford University. He made fundamental contributions to combinatorics, number theory, numerical analysis and probability theory...
requesting a research fellowship in the United States
United States
The United States of America is a federal constitutional republic comprising fifty states and a federal district...
, but these efforts came to nothing. Finally, in 1942 when he could no longer avoid being sent to a concentration camp, Hausdorff committed suicide
Suicide
Suicide is the act of intentionally causing one's own death. Suicide is often committed out of despair or attributed to some underlying mental disorder, such as depression, bipolar disorder, schizophrenia, alcoholism, or drug abuse...
together with his wife, Charlotte Goldschmidt Hausdorff, and sister-in-law, Edith Goldschmidt Pappenheim, on the 26th of January. They are buried in Bonn, Germany.

Hausdorff was the first to state a generalization of Cantor
Georg Cantor
Georg Ferdinand Ludwig Philipp Cantor was a German mathematician, best known as the inventor of set theory, which has become a fundamental theory in mathematics. Cantor established the importance of one-to-one correspondence between the members of two sets, defined infinite and well-ordered sets,...
's Continuum Hypothesis
Continuum hypothesis
In mathematics, the continuum hypothesis is a hypothesis, advanced by Georg Cantor in 1874, about the possible sizes of infinite sets. It states:Establishing the truth or falsehood of the continuum hypothesis is the first of Hilbert's 23 problems presented in the year 1900...
; his Aleph Hypothesis, which appears in his 1908 article Grundzüge einer Theorie der geordneten Mengen, and which is equivalent to what is now called the Generalized Continuum Hypothesis.

In 1914 using the Axiom of Choice, he gave a "paradoxical" decomposition of the 2-sphere as the disjoint union of four sets A,B,C, and Q, where Q is countable and the sets A, B, C, and B

C are mutually congruent. This later inspired the Banach–Tarski
Banach–Tarski paradox
The Banach–Tarski paradox is a theorem in set theoretic geometry which states the following: Given a solid ball in 3-dimensional space, there exists a decomposition of the ball into a finite number of non-overlapping pieces , which can then be put back together in a different way to yield two...
paradoxical decomposition of the ball in 3-space.

Hausdorff also published philosophical and literary works under the pseudonym "Paul Mongré". "Paul Mongre" published a number of books and articles on the philosopher Friedrich Nietzsche
Friedrich Nietzsche
Friedrich Wilhelm Nietzsche was a 19th-century German philosopher, poet, composer and classical philologist...
, as well as a number of reviews of contemporary literature and drama. Mongre-Hausdorff also published a satirical play which performed in a dozen German cities. In the course of attempts to refute Nietzsche's doctrine of "the eternal return
Eternal return
Eternal return is a concept which posits that the universe has been recurring, and will continue to recur, in a self-similar form an infinite number of times across infinite time or space. The concept initially inherent in Indian philosophy was later found in ancient Egypt, and was subsequently...
of the same," Hausdorff was led to Cantor's set theory, which set Hausdorff on the road to his set-theoretical discoveries. Hausdorff's Nietzschean philosophical writings appear in volume VII of his collected works.

A project to publish Hausdorff's works and biography, along with a description of his mathematical contributions, in nine volumes, is underway, edited by E. Brieskorn, F. Hirzebruch, W. Purkert, R. Remmert, E. Scholz.

The "Hausdorff-Edition“, edited by E. Brieskorn, F. Hirzebruch, W. Purkert (alle Bonn), R. Remmert (Münster) und E. Scholz (Wuppertal) with the collaboration of over twenty mathematicians, historians, philosophers and scholars, will present the works of Hausdorff, with commentary and much additional material. The edition is an ongoing project of the Nordrhein-Westfälischen Akademie der Wissenschaften und der Künste. The planned nine volumes are being published by Springer-Verlag
Springer Science+Business Media
- Selected publications :* Encyclopaedia of Mathematics* Ergebnisse der Mathematik und ihrer Grenzgebiete * Graduate Texts in Mathematics * Grothendieck's Séminaire de géométrie algébrique...
, Heidelberg. As of 2008, five had appeared. See the Home page of the Hausdorff Project Homepage of the Hausdorff Edition (German) for its current status and further information. The projected volumes are: