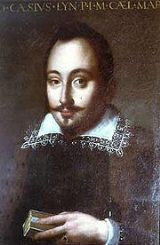 Encyclopedia
Federico Angelo Cesi was an Italian scientist
Scientist
A scientist in a broad sense is one engaging in a systematic activity to acquire knowledge. In a more restricted sense, a scientist is an individual who uses the scientific method. The person may be an expert in one or more areas of science. This article focuses on the more restricted use of the word...
, naturalist
Naturalist
Naturalist may refer to:* Practitioner of natural history* Conservationist* Advocate of naturalism * Naturalist , autobiography-See also:* The American Naturalist, periodical* Naturalism...
, and founder of the Accademia dei Lincei
Accademia dei Lincei
The Accademia dei Lincei, , is an Italian science academy, located at the Palazzo Corsini on the Via della Lungara in Rome, Italy....
. On his father's death in 1630, he became briefly lord of Acquasparta.

Federico Cesi was born to an aristocratic family highly connected in Rome and the Papal States
Papal States
The Papal State, State of the Church, or Pontifical States were among the major historical states of Italy from roughly the 6th century until the Italian peninsula was unified in 1861 by the Kingdom of Piedmont-Sardinia .The Papal States comprised territories under...
. The family derives its name from Cesi
Cesi
Cesi is a frazione of the Italian comune of Terni, in the province of Terni, southern Umbria, Italy. The small borgo, which retains its late-medieval aspect, set among olive groves, lies "stretched out lengthwise along a narrow contour on the slopes of M. Torre Maggiore," about 18 km north of...
, a little town near Rome. They had a close connection with the Catholic Church, Frederico's uncle Bartolomeo Cesi was a cardinal
Cardinal (Catholicism)
A cardinal is a senior ecclesiastical official, usually an ordained bishop, and ecclesiastical prince of the Catholic Church. They are collectively known as the College of Cardinals, which as a body elects a new pope. The duties of the cardinals include attending the meetings of the College and...
in the church, and most of their wealth came from that connection. Federico was the first of eleven legitimate male children and was born in Palazzo Cesi, in via della Maschera d'Oro, Rome, February 26, 1585. His father was Federico, marchese di Monticelli (1562–1630) and his mother was Olimpia Orsini of Todi
Todi
Todi is a town and comune of the province of Perugia in central Italy. It is perched on a tall two-crested hill overlooking the east bank of the river Tiber, commanding distant views in every direction.In the 1990s, Richard S...
. In 1614 Cesi was married to Artemisia Colonna, the daughter of Francesco, principe di Palestrina; she died two years later. In 1616 he was married to Salviati Isabella, the daughter of the Marquis of Lorenzo. In 1618 he moved to Acquasparta
Acquasparta
Acquasparta is a town and comune in the province of Terni . It is located on a hill above the Naia Valley and the river of the same name, facing the Monti Martani mountain range....
and lived there until his death at the age of forty-five.


The Accademia dei Lincei ("Academy of the Lynxes")

In 1603, at the age of eighteen, Cesi invited three slightly older friends, the Dutch physician Johannes Van Heeck (in Italy Giovanni Ecchio), and two fellow Umbrians, mathematician Francesco Stelluti
Francesco Stelluti
Francesco Stelluti was an Italian polymath who worked in the fields of mathematics, microscopy, literature, and astronomy. Alongside Federico Cesi and Johannes Van Heeck, he founded the Accademia dei Lincei in August 1603. In 1625 he published the first accounts of microscopic...
of Fabriano and polymath Anastasio de Filiis of Terni to join with him in the founding of the Accademia dei Lincei ("Academy of the Lynxes"), aimed at the understanding of all natural sciences through a method of research based upon observation, experiment, and the inductive method. Their goal was to penetrate the secrets of nature, observing it at both microscopic and macroscopic levels. The four men chose the name "Lincei" (lynx
Lynx
A lynx is any of the four Lynx genus species of medium-sized wildcats. The name "lynx" originated in Middle English via Latin from Greek word "λύγξ", derived from the Indo-European root "*leuk-", meaning "light, brightness", in reference to the luminescence of its reflective eyes...
) from Giambattista della Porta
Giambattista della Porta
Giambattista della Porta , also known as Giovanni Battista Della Porta and John Baptist Porta, was an Italian scholar, polymath and playwright who lived in Naples at the time of the Scientific Revolution and Reformation....
's book "Magia Naturalis
Natural Magic
is a work of popular science by Giambattista della Porta first published in Naples in 1558. Its popularity ensured it was republished in five Latin editions within ten years, with translations into Italian , French, and Dutch printed.Natural Magic was revised and considerably expanded...
", which had an illustration of the fabled cat on the cover and the words "...with lynx like eyes, examining those things which manifest themselves, so that having observed them, he may zealously use them". Cesi chose the sharp eyed lynx and the eagle
Eagle
Eagles are members of the bird family Accipitridae, and belong to several genera which are not necessarily closely related to each other. Most of the more than 60 species occur in Eurasia and Africa. Outside this area, just two species can be found in the United States and Canada, nine more in...
for the Academy's symbols. The academy's motto, chosen by Cesi, was: "take care of small things if you want to obtain the greatest results" (minima cura si maxima vis).

Since it was an uncertain time to conduct scientific research — in 1578 the Inquisition
Inquisition
The Inquisition, Inquisitio Haereticae Pravitatis , was the "fight against heretics" by several institutions within the justice-system of the Roman Catholic Church. It started in the 12th century, with the introduction of torture in the persecution of heresy...
had closed Giambattista della Porta's Academia Secretorum Naturae
Academia Secretorum Naturae
The first scientific society, the Academia Secretorum Naturae was founded in Naples in 1560 by Giambattista della Porta, a noted polymath. In Italian it was called Accademia dei Segreti, the Academy of the Mysteries of Nature, and the members referred to themselves as the otiosi...
in Naples under suspicion of sorcery
Magic (paranormal)
Magic is the claimed art of manipulating aspects of reality either by supernatural means or through knowledge of occult laws unknown to science. It is in contrast to science, in that science does not accept anything not subject to either direct or indirect observation, and subject to logical...
— the Accademia dei Lincei had rough beginnings. Cesi's own father forbade Cesi's association with the other three men, suspecting them of undermining his authority and trying to separate his son from family interests. The four "Lynxes" soon returned to their native cities and continued to communicate only by letter, adopting astronomical pen names: Cesi, perpetual president, was Celívago Cesi traveled to Naples
Naples
Naples is a city in Southern Italy, situated on the country's west coast by the Gulf of Naples. Lying between two notable volcanic regions, Mount Vesuvius and the Phlegraean Fields, it is the capital of the region of Campania and of the province of Naples...
where he met della Porta, who he seemed to have been corresponding with for some time. There he described his academy to Della Porta, who encouraged Cesi to continue with his endeavors. The academy managed to survive due to Cesi resources as a rich nobleman and his diplomatic skills in navigating the politics of Counter-Reformation
Counter-Reformation
The Counter-Reformation was the period of Catholic revival beginning with the Council of Trent and ending at the close of the Thirty Years' War, 1648 as a response to the Protestant Reformation.The Counter-Reformation was a comprehensive effort, composed of four major elements:#Ecclesiastical or...
Rome. Cesi managed to expand the ranks of the academy, recruiting Giambattista della Porta himself in 1610 and Galileo Galilei
Galileo Galilei
Galileo Galilei , was an Italian physicist, mathematician, astronomer, and philosopher who played a major role in the Scientific Revolution. His achievements include improvements to the telescope and consequent astronomical observations and support for Copernicanism...
in 1611. Cesi's Academy published Galileo's "Istoria e dimostrazione intorno alle macchie solari" (Letters on Sunspots) in 1613, "The Assayer
The Assayer
The Assayer was a book published in Rome by Galileo Galilei in October 1623.The book was a polemic against the treatise on the comets of 1618 by Orazio Grassi, a Jesuit mathematician at the Collegio Romano. In this matter Grassi, for all his Aristotelianism, was right and Galileo was wrong...
" in 1623, and also had a hand in defending Galileo in his controversies with establishment leaders and ecclesiastical authorities.

Cesi's own intense activity in the Academy was cut short by his sudden death in 1630 and the original Accademia dei Lincei did not survive his death. It was revived in its currently well known form of the Pontifical Academy of Sciences
Pontifical Academy of Sciences
The Pontifical Academy of Sciences is a scientific academy of the Vatican, founded in 1936 by Pope Pius XI. It is placed under the protection of the reigning Supreme Pontiff. Its aim is to promote the progress of the mathematical, physical and natural sciences and the study of related...
, by the Vatican, Pope Pius IX
Pope Pius IX
Blessed Pope Pius IX , born Giovanni Maria Mastai-Ferretti, was the longest-reigning elected Pope in the history of the Catholic Church, serving from 16 June 1846 until his death, a period of nearly 32 years. During his pontificate, he convened the First Vatican Council in 1869, which decreed papal...
in 1847.