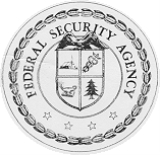 The reorganization plan created the cabinet
Cabinet (government)
A Cabinet is a body of high ranking government officials, typically representing the executive branch. It can also sometimes be referred to as the Council of Ministers, an Executive Council, or an Executive Committee.- Overview :...
-level Federal Security Agency. Included in the FSA was the Social Security Board, the U.S. Public Health Service, Food and Drug Administration
Food and Drug Administration
The Food and Drug Administration is an agency of the United States Department of Health and Human Services, one of the United States federal executive departments...
, the Civilian Conservation Corps
Civilian Conservation Corps
The Civilian Conservation Corps was a public work relief program that operated from 1933 to 1942 in the United States for unemployed, unmarried men from relief families, ages 18–25. A part of the New Deal of President Franklin D...
, the Office of Education (later the United States Department of Education
United States Department of Education
The United States Department of Education, also referred to as ED or the ED for Education Department, is a Cabinet-level department of the United States government...
), the National Youth Administration
National Youth Administration
The National Youth Administration was a New Deal agency in the United States that focused on providing work and education for Americans between the ages of 16 and 24. It operated from 1935 to 1939 as part of the Works Progress Administration . Following the passage of the Reorganization Act of...
and a number of other agencies. Its first director was Paul V. McNutt
Paul V. McNutt
Paul Vories McNutt was an American politician who served as the 34th Governor of Indiana during the Great Depression, high commissioner to the Philippines, administrator of the Federal Security Agency, chairman of the War Manpower Commission and ambassador to the Philippines.-Family and...
. Secretly, the FSA was also a cover agency from 1942 to 1944 for the War Research Service
War Research Service
The War Research Service was a civilian agency of the United States government established during World War II to pursue research relating to biological warfare. Established in May 1942 by Secretary of War Henry L...
, a secret program to develop chemical
Chemical warfare
Chemical warfare involves using the toxic properties of chemical substances as weapons. This type of warfare is distinct from Nuclear warfare and Biological warfare, which together make up NBC, the military acronym for Nuclear, Biological, and Chemical...
and biological weapons
Biological warfare
Biological warfare is the use of biological toxins or infectious agents such as bacteria, viruses, and fungi with intent to kill or incapacitate humans, animals or plants as an act of war...
.