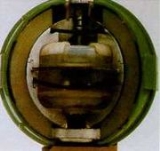 Overview
Biological warfare is the use of biological toxins or infectious agents
Pathogen
A pathogen gignomai "I give birth to") or infectious agent — colloquially, a germ — is a microbe or microorganism such as a virus, bacterium, prion, or fungus that causes disease in its animal or plant host...
such as bacteria
Bacteria
Bacteria are a large domain of prokaryotic microorganisms. Typically a few micrometres in length, bacteria have a wide range of shapes, ranging from spheres to rods and spirals...
, virus
Virus
A virus is a small infectious agent that can replicate only inside the living cells of organisms. Viruses infect all types of organisms, from animals and plants to bacteria and archaea...
es, and fungi
Fungus
A fungus is a member of a large group of eukaryotic organisms that includes microorganisms such as yeasts and molds , as well as the more familiar mushrooms. These organisms are classified as a kingdom, Fungi, which is separate from plants, animals, and bacteria...
with intent to kill or incapacitate humans, animals or plants as an act of war. Biological weapons (often termed "bio-weapons" or "bio-agents") are living organism
Organism
In biology, an organism is any contiguous living system . In at least some form, all organisms are capable of response to stimuli, reproduction, growth and development, and maintenance of homoeostasis as a stable whole.An organism may either be unicellular or, as in the case of humans, comprise...
s or replicating entities (viruses) that reproduce or replicate within their host
Host (biology)
In biology, a host is an organism that harbors a parasite, or a mutual or commensal symbiont, typically providing nourishment and shelter. In botany, a host plant is one that supplies food resources and substrate for certain insects or other fauna...
victims. Entomological (insect) warfare
Entomological warfare
Entomological warfare is a type of biological warfare that uses insects to attack the enemy. The concept has existed for centuries and research and development have continued into the modern era...
is also considered a type of BW.

Biological weapons may be employed in various ways to gain a strategic
Strategy
Strategy, a word of military origin, refers to a plan of action designed to achieve a particular goal. In military usage strategy is distinct from tactics, which are concerned with the conduct of an engagement, while strategy is concerned with how different engagements are linked...
or tactical advantage over an adversary, either by threat or by actual deployment.

If a person was givin staphylococcal enterotoxin B SEB code named UC what was to be expected to happen to ones health?
More