Encyclopedia
Farshi Pajama is a woman's dress that was worn between late 17th and early 20th centuries in Muslim
Muslim
A Muslim, also spelled Moslem, is an adherent of Islam, a monotheistic, Abrahamic religion based on the Quran, which Muslims consider the verbatim word of God as revealed to prophet Muhammad. "Muslim" is the Arabic term for "submitter" .Muslims believe that God is one and incomparable...
courts of Oudh by royalty and ladies from privilege
Privilege
A privilege is a special entitlement to immunity granted by the state or another authority to a restricted group, either by birth or on a conditional basis. It can be revoked in certain circumstances. In modern democratic states, a privilege is conditional and granted only after birth...
d classes of Uttar Pradesh (formerly United Provinces of Agra and Oudh
United Provinces of Agra and Oudh
The United Provinces of Agra and Oudh was a province of India under the British Raj, which existed from 1902 to 1947; the official name was shortened by the Government of India Act 1935 to United Provinces, by which the province had been commonly known, and by which name it was also a province of...
in North India.) Modeled after the flowing gown
Gown
A gown is a loose outer garment from knee- to full-length worn by men and women in Europe from the early Middle Ages to the 17th century ; later, gown was applied to any woman's garment consisting of a bodice and attached skirt.A long, loosely-fitted gown called a Banyan was worn by men in the 18th...
s worn by British
Great Britain
Great Britain or Britain is an island situated to the northwest of Continental Europe. It is the ninth largest island in the world, and the largest European island, as well as the largest of the British Isles...
noblewomen*, the complete outfit consists of three basic parts - The Kurta or a long shirt, the dupatta
Dupatta
Dupatta Dupatta(Urdu: دوپٹا, Hindi: दुपट्टा, Bengali: ওড়না, Sindhi: پوتي, Tamil:துப்பட்ட) Dupatta(Urdu: دوپٹا, Hindi: दुपट्टा, Bengali: ওড়না, Sindhi: پوتي, Tamil:துப்பட்ட) (alternative names include chadar (in Pakistan), orni/odhni, chunri, chunni, orna, and pacheri, is a long,...
or the long stole
Stole (shawl)
A stole is a lady's shawl, especially a formal shawl of expensive fabric used around the shoulders over a party dress or ballgown.A stole is typically narrower than a shawl, and of simpler construction than a cape; being a length of a quality material, wrapped and carried about the shoulders or arms...
which is an essential piece of cloth in traditional Indian wear covering the head and bossom, and the third and most important, the farshi pajama, which is a flowing two legged skirt held by drawstrings. It falls straight to the ankles from where it starts flaring flowing copiously onto the floor. The farshi pajama, in this era is often called Farshi Gharara, a term not used before mid 20th century and is considered a distortion. The confusion is said to be because of the Farshi Pajama's similarity with the Gharara
Gharara
A gharara or bara paincha is a traditional Lucknowi garment, worn by women in the Indian Subcontinent. It consists of a kurti , a dupatta , and most importantly, a pair of wide-legged pants, ruched at the knee so they flare out dramatically...
. 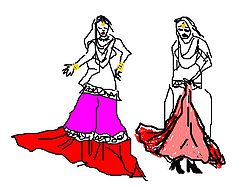 Farshi means 'associated with the 'farsh' or floor' (for example farshi baithak which is associated with sitting on the floor). When combined with the word Pajama, the term evolves to mean a bottom-wear garment that falls generously on the floor, and trails as one walks, however in reality, during walking, an expert wearer holds the dress by carefully pulling up and folding the excess flaring trail and holding it in in her left hand keeping the right one free which is when the dress does not trail. The large quantity (historically, 9-15 yards) of expensive cloth, embroidered using the art of goldwork (embroidery)
Goldwork (embroidery)
Goldwork is the art of embroidery using metal threads. It is particularly prized for the way light plays on it. The term "goldwork" is used even when the threads are imitation gold, silver, or copper...
and sterling silver
Sterling silver
Sterling silver is an alloy of silver containing 92.5% by mass of silver and 7.5% by mass of other metals, usually copper. The sterling silver standard has a minimum millesimal fineness of 925....
wire threads (Karchob/Zari
Zari
Zari is basically a tinsel thread meant for weaving and embroidery. It is manufactured by winding or wrapping a flattened metallic strip made from pure gold, silver or slitted metallised polyester film, on a core yarn, usually of pure silk, art silk, viscose, cotton, nylon, polyester, P.P.,...
/Zardozi
Zardozi
Zardozi or Zar-douzi work is a type of embroidery in Iran, India and Pakistan.-Iran:Zardozi is on of the most important elements of Persian cultural signs and Handicrafts. It is named around the country by names such Zar-douzi , Kam-douzi , Gol-douzi and Kaman-douzi...
etc), used to make a farshi gharara mainly reflects the grandeur and extravagance of the nobles and rulers of that era.

Different eras brought changes to the fashion and cuts of the dress. These variations were also dependent from one princely state's court to another.

Modified, smaller-length versions are still, but rarely, worn by women in weddings in India
India
India , officially the Republic of India , is a country in South Asia. It is the seventh-largest country by geographical area, the second-most populous country with over 1.2 billion people, and the most populous democracy in the world...
and Pakistan
Pakistan
Pakistan , officially the Islamic Republic of Pakistan is a sovereign state in South Asia. It has a coastline along the Arabian Sea and the Gulf of Oman in the south and is bordered by Afghanistan and Iran in the west, India in the east and China in the far northeast. In the north, Tajikistan...
to recreate bygone elegance.