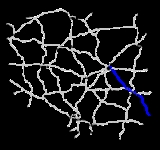 On December 17, 2009 the bidding process was started for the contracts to build the 66 km (41 mi) section of the road around Lublin, from Kurów
Kurów
Kurów is a village in south-eastern Poland, located between Puławy and Lublin, on the Kurówka River. It is capital of a separate gmina called Gmina Kurów, within Lublin Voivodeship...
to Piaski, which will include the city's east-west bypass road. The construction of this section should begin in November, 2010 and finish in the Fall of 2012. On this section S17 will overlap with S12
Expressway S12 (Poland)
Expressway S12 or express road S12 is a major road in Poland which has been planned to run from Piotrków Trybunalski, through Radom, Lublin and Chełm, to the border crossing with Ukraine at Dorohusk. The completed road should be about long...
.

In Warsaw the S17 expressway will serve as the eastern bypass of the city (Wschodnia Obwodnica Warszawy). The route has been finalised, and construction of first sections may begin in 2010.
The source of this article is wikipedia, the free encyclopedia.  The text of this article is licensed under the GFDL.