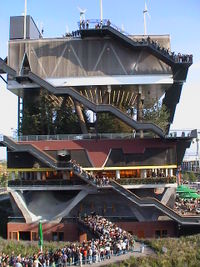 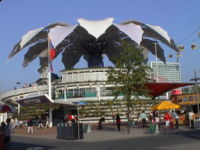 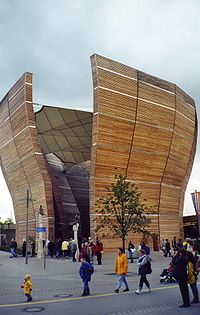 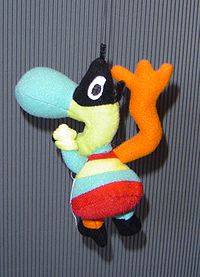 Expo 2000 was a World's Fair
World's Fair
World's fair, World fair, Universal Exposition, and World Expo are various large public exhibitions held in different parts of the world. The first Expo was held in The Crystal Palace in Hyde Park, London, United Kingdom, in 1851, under the title "Great Exhibition of the Works of Industry of All...
held in Hanover
Hanover
Hanover or Hannover, on the river Leine, is the capital of the federal state of Lower Saxony , Germany and was once by personal union the family seat of the Hanoverian Kings of Great Britain, under their title as the dukes of Brunswick-Lüneburg...
, Germany
Germany
Germany , officially the Federal Republic of Germany , is a federal parliamentary republic in Europe. The country consists of 16 states while the capital and largest city is Berlin. Germany covers an area of 357,021 km2 and has a largely temperate seasonal climate...
from Thursday, June 1 to Tuesday, October 31, 2000. It was located on the Hanover fairground
Hanover fairground
The Hanover fairground is an exhibition area in the Mittelfeld district of Hanover, Germany. Featuring 496,000 m² of covered indoor space, 58,000 m² of open-air space, 27 halls and pavilions and a convention centre with 35 function rooms, it is the largest exhibition ground in the world.-...
(Messegelände Hannover), which is famous for hosting CeBIT
CeBIT
CeBIT is the world's largest and most international computer expo. CeBIT is held each year on the world's largest fairground in Hanover, Germany, and is a barometer of the state of the art in information technology...
. The fair was not a financial success.

The fair's masterplan was designed in a joint venture with Studio d'Arnaboldi / Cavadini, Locarno and AS&P (Albert Speer
Albert Speer (the younger)
Albert Speer is a German architect and urban planner. He is son of the architect and Nazi Party official Albert Speer whom he hardly saw as a child. Albert Speer, Jr.'s grandfather, Albert Friedrich Speer, was also an architect.-Career:...
und Partner GmbH).

On June 14, 1990 the international world's fair organization B.I.E. awarded Expo 2000 to Hanover, beating out Toronto
Toronto
Toronto is the provincial capital of Ontario and the largest city in Canada. It is located in Southern Ontario on the northwestern shore of Lake Ontario. A relatively modern city, Toronto's history dates back to the late-18th century, when its land was first purchased by the British monarchy from...
by a 21 to 20 vote. In 1992 the architects Studio Arnaboldi/Cavadini of Locarno won an international design competition for the masterplan of the exhibition grounds. On June 12 of that same year a survey conducted by the city council was made public showing only 51.5% of area residents supported hosting the expo.

On May 5, 1994 a new company was created by the government in Bonn, Gesellschaft zur Vorbereitung und Durchführung der Weltausstellung EXPO 2000 in Hannover (EXPO 2000 Hanover GmbH). Headed by chairman Helmut Werner, the company was responsible for the construction and management of the fair.

In 1995 the supervisory board agreed on the concept for the thematics of the fair. Construction finally began on April 22, 1996.

Unlike previous expos, which focused on present advances in science and technology, EXPO 2000 focused more on developing and presenting solutions for the future.

The fair opened to the public on Thursday, June 1, 2000 and ran five months, ending on Tuesday, October 31.

The Expo site was situated on the original 1,000,000 square meters of the Hanover fairground
Hanover fairground
The Hanover fairground is an exhibition area in the Mittelfeld district of Hanover, Germany. Featuring 496,000 m² of covered indoor space, 58,000 m² of open-air space, 27 halls and pavilions and a convention centre with 35 function rooms, it is the largest exhibition ground in the world.-...
; an additional 600,000 m² was also made available as a newly opened section to the grounds. As a visitor walked in and tickets were taken, looking above to the approximately four-story-high ceiling, a visitor would have noticed the huge circular pods that held large TVs showing animated people greeting the visitors and providing tourist information in different languages. Some ten large McDonald's
McDonald's
McDonald's Corporation is the world's largest chain of hamburger fast food restaurants, serving around 64 million customers daily in 119 countries. Headquartered in the United States, the company began in 1940 as a barbecue restaurant operated by the eponymous Richard and Maurice McDonald; in 1948...
restaurants were also built, along with restaurants representing several of the exhibitor countries. Small retail locations were also set up to supply Expo merchandise. The United States
United States
The United States of America is a federal constitutional republic comprising fifty states and a federal district...
reversed its decision to take part at a relatively late stage, and the area set aside for the American pavilion was left undeveloped.

40,000,000 visitors were expected at Expo 2000, but only 25,210,000 people came to see the event. This led to a financial deficit of about $600,000,000. With pre-ordered tickets priced at 69 DM, the fair seemed expensive compared to other days out. Commentator Georg Giersberg wrote in the Frankfurter Allgemeine that entrance fees for Germany's 53 main theme parks cost on average less than half the price of the Expo (about 30 DM). Other financial shortfalls came from a lack of corporate sponsorship, since it cost US$4.8 million to be an official product supplier or US$14.5 million to become a world partner.

Part of the failure of the Expo was a lack of clear perception of what to expect at Expo 2000, not helped by a "cerebral" advertising campaign that had failed to explain what the Expo was for. In a 2000 Time article a Berlin-based marketing firm, Scholz & Friends
Scholz & Friends
Scholz & Friends is one of the biggest advertising agencies in Europe. The company was founded in Hamburg, Germany in 1981 by Jürgen Scholz, Uwe Lang and Michael Menzel....
, stated that "the organizers have failed to convey to the public a clear image of what Expo 2000 is going to be: an entertainment park, a blown-up museum, or a nature reserve." In the same article Ralf Strobach, secretary of Hanover's Citizens' Initiative for Environment Protection, said that "For a long time, companies were unsure if they would be putting money in an eco-show or a showcase for their latest inventions." Only after the fair was open and clearly not meeting expectations was a new advertising campaign created, aimed at the domestic market with British actor Peter Ustinov
Peter Ustinov
Peter Alexander Ustinov CBE was an English actor, writer and dramatist. He was also renowned as a filmmaker, theatre and opera director, stage designer, author, screenwriter, comedian, humourist, newspaper and magazine columnist, radio broadcaster and television presenter...
and German television star Verona Feldbusch
Verona Pooth
Verona Pooth is a German television personality, beauty pageant titleholder, and occasional actress. In 1993, she was Miss Germany and Miss Intercontinental and represented her country at Miss Universe.She married Franjo Pooth in 2004, and they have one son, San Diego...
and stressing the fun side of the Expo, under the slogan "Das gibt's nur einmal, es kommt nie wieder" ("This only happens once, it's never coming back").

The German band Kraftwerk
Kraftwerk
Kraftwerk is an influential electronic music band from Düsseldorf, Germany. The group was formed by Ralf Hütter and Florian Schneider in 1970, and was fronted by them until Schneider's departure in 2008...
created a vocoded
Vocoder
A vocoder is an analysis/synthesis system, mostly used for speech. In the encoder, the input is passed through a multiband filter, each band is passed through an envelope follower, and the control signals from the envelope followers are communicated to the decoder...
speech signature theme, "Expo 2000
Expo 2000 (song)
"Expo 2000" is a song by Kraftwerk. It was originally an a cappella jingle commissioned for the Hannover Expo 2000 convention in Germany, which was subsequently developed into longer pieces with music and additional lyrics....
", which was also developed into a single of the same name. Later a remix single "Expo Remix" was released. The band was also paid US$190,000 for a five-second jingle, leading Chancellor Gerhard Schröder
Gerhard Schröder
Gerhard Fritz Kurt Schröder is a German politician, and was Chancellor of Germany from 1998 to 2005. A member of the Social Democratic Party of Germany , he led a coalition government of the SPD and the Greens. Before becoming a full-time politician, he was a lawyer, and before becoming Chancellor...
to state that he "wouldn't have spent so much money".

Some of the buildings on the EXPO site were sold after EXPO 2000 ended, but most of the exhibition area is still used for major fairs in Germany, as it has been since 1949. The southeastern area around Expo Plaza has been turned into Hanover's new centre of information technology, design, media and arts.

Most of the national pavilion buildings were demolished following the fair. Some buildings (far more than in any other world expositions) were 'saved', including the Netherlands Pavilion. The structure has now fallen into disrepair.