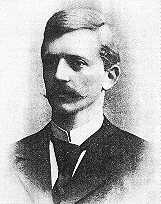 Eugen Schauman was a Finnish
Finland
Finland , officially the Republic of Finland, is a Nordic country situated in the Fennoscandian region of Northern Europe. It is bordered by Sweden in the west, Norway in the north and Russia in the east, while Estonia lies to its south across the Gulf of Finland.Around 5.4 million people reside...
nationalist and nobleman who assassinated the Governor-General
Governor-General of Finland
Governor-General of Finland ; was the military commander and the highest administrator of Finland sporadically under Swedish rule in the 17th and 18th centuries and continuously in the autonomous Grand Duchy of Finland between 1808 and 1917.-Swedish rule:...
Nikolai Ivanovich Bobrikov
Nikolai Ivanovich Bobrikov
Nikolay Ivanovich Bobrikov ; born on in St. Petersburg – June 16, 1904 in Helsingfors, Grand Duchy of Finland) was a Russian soldier and politician....
.

Eugen Schauman was born to Swedish-speaking Finnish
Finland
Finland , officially the Republic of Finland, is a Nordic country situated in the Fennoscandian region of Northern Europe. It is bordered by Sweden in the west, Norway in the north and Russia in the east, while Estonia lies to its south across the Gulf of Finland.Around 5.4 million people reside...
parents Waldemar, a general-lieutenant in the Russian army, a Privy Counsillor and senator in the Finnish Government, and Elin Maria Schauman in Kharkov, Russian Empire (now Ukraine
Ukraine
Ukraine is a country in Eastern Europe. It has an area of 603,628 km², making it the second largest contiguous country on the European continent, after Russia...
). His brother Rafael was born in 1873 and his sister Sigrid
Sigrid Schauman
Sigrid Maria Schauman was a Finnish artist and art critic....
in 1877.

Before the assassination Schauman worked as a clerk in the Senate
Senate of Finland
The Senate of Finland combined the functions of cabinet and supreme court in the Grand Duchy of Finland from 1816 to 1917 and in the independent Republic of Finland from 1917 to 1918....
. Schauman also arranged a series of marksmanship courses for local students in Helsinki
Helsinki
Helsinki is the capital and largest city in Finland. It is in the region of Uusimaa, located in southern Finland, on the shore of the Gulf of Finland, an arm of the Baltic Sea. The population of the city of Helsinki is , making it by far the most populous municipality in Finland. Helsinki is...
. These courses later became a part of the White Guards
White Guard (Finland)
The White Guard was a voluntary militia that emerged victorious over the socialist Red Guard as part of the Whites in the Finnish Civil War of 1918...
.

The assassination of Bobrikov was a topical question among the Finnish activists of the time. Other activist groups are known to have planned an assassination but Schauman convinced them to give him two weeks before they would intervene.

When Bobrikov came to the Senate house on 16 June Schauman shot him three times and then himself twice in the chest, with specially handloaded explosive bullets. Schauman died instantly. Two of the bullets that hit Bobrikov ricocheted off his decoration but the third bounced back from his buckle and caused severe damage to his stomach. Bobrikov died the same night in the Helsinki surgical hospital. 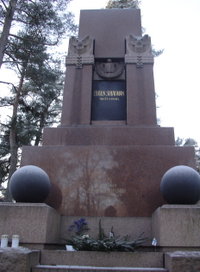 Schauman left a letter in which he stated that he justified his actions as a punishment for Bobrikov's crimes against the people of Finland. He addressed the letter to the Tsar
Nicholas II of Russia
Nicholas II was the last Emperor of Russia, Grand Prince of Finland, and titular King of Poland. His official short title was Nicholas II, Emperor and Autocrat of All the Russias and he is known as Saint Nicholas the Passion-Bearer by the Russian Orthodox Church.Nicholas II ruled from 1894 until...
and wanted him to pay attention to the problems in the whole Russian empire, especially in Poland
Congress Poland
The Kingdom of Poland , informally known as Congress Poland , created in 1815 by the Congress of Vienna, was a personal union of the Russian parcel of Poland with the Russian Empire...
and the Baltic Sea
Baltic Sea
The Baltic Sea is a brackish mediterranean sea located in Northern Europe, from 53°N to 66°N latitude and from 20°E to 26°E longitude. It is bounded by the Scandinavian Peninsula, the mainland of Europe, and the Danish islands. It drains into the Kattegat by way of the Øresund, the Great Belt and...
region. He also claimed he had acted alone and emphasized that his family was not involved in the assassination.

Schauman's body was taken to a nameless grave in the cemetery of Malmi in Helsinki. After the political situation eased up he was reburied in the Schauman family grave in the Porvoo
Porvoo
Porvoo is a city and a municipality situated on the southern coast of Finland approximately east of Helsinki. Porvoo is one of the six medieval towns in Finland, first mentioned as a city in texts from 14th century...
cemetery and a monument was built on the grave.

Schauman became somewhat of an icon of the resistance to Imperial Russia and he is still today considered a hero in Finland. His fame can be characterized by his ranking as the 34th greatest Finn of all time in the Suuret suomalaiset
Suuret suomalaiset
Suuret suomalaiset was a 2004 television show broadcast in Finland by YLE , which determined the 100 greatest Finns of all time according to the opinions of its viewers. The viewers were able to vote during a programme which lasted from October to December 2004...
television poll. In the place of the assassination in the hallway of the Council of State
Government Palace (Finland)
The Government Palace in Helsinki , is the executive office building of the Government of Finland.- History :Work on building the Senate began in 1818. The Senate moved to the palace overlooking Senate Square in 1822. The wing on the Aleksanterinkatu side was completed in 1824 followed by the...
there is a memorial plaque that states Se Pro Patria Dedit (given himself for his country).