Encyclopedia
The Senate of Finland combined the functions of cabinet
Cabinet (government)
A Cabinet is a body of high ranking government officials, typically representing the executive branch. It can also sometimes be referred to as the Council of Ministers, an Executive Council, or an Executive Committee.- Overview :...
and supreme court
Supreme court
A supreme court is the highest court within the hierarchy of many legal jurisdictions. Other descriptions for such courts include court of last resort, instance court, judgment court, high court, or apex court...
in the Grand Duchy of Finland
Grand Duchy of Finland
The Grand Duchy of Finland was the predecessor state of modern Finland. It existed 1809–1917 as part of the Russian Empire and was ruled by the Russian czar as Grand Prince.- History :...
from 1816 to 1917 and in the independent Republic of Finland
Finland
Finland , officially the Republic of Finland, is a Nordic country situated in the Fennoscandian region of Northern Europe. It is bordered by Sweden in the west, Norway in the north and Russia in the east, while Estonia lies to its south across the Gulf of Finland.Around 5.4 million people reside...
from 1917 to 1918.

The body that would become the Senate was established in 1809, when the Diet of Porvoo
Diet of Porvoo
The Diet of Porvoo , was the summoned legislative assembly to establish the Grand Principality of Finland in 1809 and the heir of the powers of the Swedish Riksdag of the Estates...
was requested to, and drew up regulations for a Government Council. In 1816, this institution was renamed to the Senate by the tsar
Alexander I of Russia
Alexander I of Russia , served as Emperor of Russia from 23 March 1801 to 1 December 1825 and the first Russian King of Poland from 1815 to 1825. He was also the first Russian Grand Duke of Finland and Lithuania....
, to demonstrate that it was equal to, rather than subsidiary to its Russian equivalent.

The Senate was headed by the Governor-General of Finland
Governor-General of Finland
Governor-General of Finland ; was the military commander and the highest administrator of Finland sporadically under Swedish rule in the 17th and 18th centuries and continuously in the autonomous Grand Duchy of Finland between 1808 and 1917.-Swedish rule:...
. The members of the Senate had to be Finnish citizens. The Senate was divided into the economic division and the judicial division. In 1822 both divisions were given a Finnish vice-chairman. From 1858 and onwards the members of the senate were formally known as senators. After the February Revolution
February Revolution
The February Revolution of 1917 was the first of two revolutions in Russia in 1917. Centered around the then capital Petrograd in March . Its immediate result was the abdication of Tsar Nicholas II, the end of the Romanov dynasty, and the end of the Russian Empire...
in Russia the Vice-chairman of the economic division became the Chairman of the Senate. Due to the Civil War
Finnish Civil War
The Finnish Civil War was a part of the national, political and social turmoil caused by World War I in Europe. The Civil War concerned control and leadership of The Grand Duchy of Finland as it achieved independence from Russia after the October Revolution in Petrograd...
in 1918 the Senate was relocated to the town of Vaasa
Vaasa
Vaasa is a city on the west coast of Finland. It received its charter in 1606, during the reign of Charles IX of Sweden and is named after the Royal House of Vasa...
from January 29 to May 3.


Vice-chairmen of the economic division 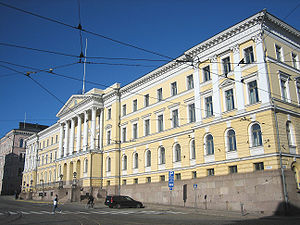 Chairmen of the Senate after February 1917