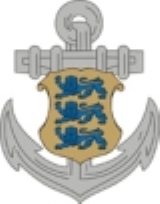 Encyclopedia
The Merevägi is the navy of Republic of Estonia and is part of the unified Kaitsevägi (Estonian Defence Force).

In total, there are about four commissioned ships in the Estonian Navy, including three auxiliary ships; the displacement of the navy is under 10,000 tonnes making it one of the smallest navies in the world. The Estonian Navy has been reduced severely since the second half of the decade mainly due to insufficient maintenance, lack of funding and hereby training of personnel and timely replacement of equipments. Another possible setback could be attributed to Estonia's domestic lack of maritime defence policy strategy as the current navy neither operates a single traditional warship that could performe a defensive or an offensive operations nor a coastal defense capabilities and maritime landing operations along its long and island rich territorial waters.

In general the Estonian Navy in the terms of maritime naval terminology can be classified between the green-water and brown-water navies having at the same time both naval type capaibilities. Today green-water navies are generally defined as navies with frigates or corvettes operating in coastal and regional areas. When the green-water navies are usually capable of sending their naval ships overseas on friendly port-visits, the Estonin Navy has participated in numerous time at NATO´s naval joint-exercises. The brown-water navy usually lacks either the ability for sustained long-distance combat operations and the Estonian current naval-doctrine does not envisage deployments far away from its home bases. Although the Merevägi being a hybrid of the brown/green-water navy does not imply that the Estonian Navy lacks offensive capability, as many small littoral-combat ships today can be armed with powerful anti-ship missiles.

In 2010, the Ministry of Defence confirmed an interest to obtain a number of warships in the terms or gunboats in the purpouse likely to ensure defence of territorial waters and to improve maritime surveillance. In late 2011, despite the changes in general defence policy and the armed forces reforms that are to take place in the coming years it is still not certain if, what type and number of the vessels will be pobtained for the navy.

During the Estonian War of Independence and after the Treaty of Tartu
Treaty of Tartu (Russian–Estonian)
Tartu Peace Treaty or Treaty of Tartu was a peace treaty between Estonia and Russian SFSR signed on February 2, 1920 ending the Estonian War of Independence. The terms of the treaty stated that "Russia unreservedly recognises" the independence of Republic of Estonia de jure and renounced in...
the Estonia Navy began to rebuild and develop the coastal defence network. From 1918 to 1940 Estonia invested millions of kroons
Estonian kroon
In 1992, coins were introduced in denominations of 5, 10, 20 & 50 senti, as well as 1 kroon. The 1 kroon was struck in cupronickel, the others in aluminum-bronze. However, in 1997, nickel-plated steel 20 senti were introduced, followed by aluminum-bronze 1 kroon in 1998. 5 senti coins were not...
into the renovation and development of the coastal defence. By 1939 the coastal batteries presented a considerable naval force and were considered among the Estonian Navy elite forces. During the World War II
World War II
World War II, or the Second World War , was a global conflict lasting from 1939 to 1945, involving most of the world's nations—including all of the great powers—eventually forming two opposing military alliances: the Allies and the Axis...
and later the Soviet occupation of Estonia, little has remained of the former coastal defence lines and fortifications. Today some buildings and firing positions can be seen various places of which the most well preserved are lockated on the island of Aegna.

Each Baltic state appoints one or two ships to BALTRON for certain period and staff members for one year. Service in BALTRON provides both, the crews and staff officers, with an excellent opportunity to serve in international environment and acquire valuable experience in mine countermeasures.
Estonia provides BALTRON with on-shore facilities for the staff.

Since 1995 Estonian Navy ships have participated in most of the major international exercises and operations carried out in the Baltic Sea. Even though it was not until 1993 when the Navy was re-established and despite of the fact that it incorporates one of the smallest fleets in the world, the young crews of the Navy ships have demonstrated excellent interoperability during international exercises and have proved to be equal partners with other navies.

21st century
From May 2005 to March 2006 EML Admiral Pitka (A230)
EML Admiral Pitka (A230)
EML Admiral Pitka is a Beskytteren-class ocean patrol vessel of the Estonian Navy and belongs into the Estonian Navy Mineships Division. The commanding officer of the vessel is Senior Lieutenant Peep Laanisto...
was assigned as the Command and Support Ship of NATO's Standing NRF Mine Countermeasures Group 1
Standing NRF Mine Countermeasures Group 1
Standing NATO Mine Countermeasures Group 1 is a North Atlantic Treaty Organisation standing mine countermeasures Immediate Reaction Forces...
(SNMCMG1) which is part of the NATO Response Force
NATO Response Force
The NATO Response Force is a "coherent, high-readiness, joint, multinational force package" of up to 25,000 troops that is "technologically advanced, flexible, deployable, interoperable and sustainable"...
's maritime capability. ENS Admiral Pitka was the first vessel from the Baltic navies to be part of the force. SNMCMG1 is also one of the Estonian Navy's main NATO partners.

The Estonian Navy uses a small number of different vessels and weapon-systems. Since the restoration of the Estonian Defence Forces on 3 September 1991 and the Estonian Navy on 1 July 1993 the naval force has developed tremendously. Then-Commander Estonian Naval Defence Forces, Commodore Roland Leit, was interviewed by Jane's Defence Weekly
Jane's Defence Weekly
Jane's Defence Weekly is a weekly magazine reporting on military and corporate affairs, edited by Peter Felstead. It is one of a number of military-related publications named after John F. T. Jane, an Englishman who first published Jane's All the World's Fighting Ships in 1898...
on 9 July 1994. 'When the Soviet Navy
Soviet Navy
The Soviet Navy was the naval arm of the Soviet Armed Forces. Often referred to as the Red Fleet, the Soviet Navy would have played an instrumental role in a Warsaw Pact war with NATO, where it would have attempted to prevent naval convoys from bringing reinforcements across the Atlantic Ocean...
left the Tallinn Naval Base, they sabotaged the facilities, and scuttled about 10 of their ships in the harbour. They broke all the windows, all the heating, and all the electricity equipment. When they came in 1939 they took over our port facilities in good order. Now they are leaving us a mess, he said bitterly.' 'We got nothing from the Russian Navy. The Griff class patrol craft we got not from them but from a Russian firm that had bought the hulls first. Their navigation and radio systems are broken, too. We hope to have it all repaired and bring the craft into service before the end of the year.'

Although the Soviet legacy's clean-up and military infrastructure rebuilding has taken most of the defence budget resources away from the Navy the armament and equipment has improved a great deal.
Ships

The “Merevägi” was founded November 21 in 1918. The foundation and development of the Estonian Navy relays greatly on the British Navy which operated on the Gulf of Finland as an ally to Estonia during the Estonian War of Independence. The first Estonian navy ships, minecruisers Lennuk and Wambola, were gifted by the British royal Navy after they have been captured from the Russian Baltic Fleet in 1919.

Historic and present naval vessels of the Estonian Navy:

Most Estonian Navy officers have been trained in European or US naval academies. In 2003 the Navy established its own Centre of Naval Education and Training (CNET) to train junior petty officers.

Each Baltic state shares its limited training resources with the others. For instance, Estonia provides communications training at the Baltic Naval Communications School in Tallinn and Latvia hosts a common Baltic Naval Diving Training Centre in Liepaja.

According to the long-term defence development plan the Merevägi will receive some new capabilities. Of those new warfare capabilities the procurement of multirole fast patrol boats will be a priority. The operational need for such vessels is likely to ensure defence of territorial waters and to improve maritime surveillance. According to the Ministry of Defence such new capability development for the naval forces will cost roughly around 100 million krones. It is not yet certain as to the number or type of vessels which will be procured. In addition to the current capabilities the command and control and shore-to-vessel communications will also be further improved.