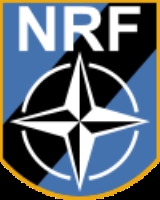 The NATO Response Force (NRF) is a "coherent, high-readiness, joint, multinational force package" of up to 25,000 troops that is "technologically advanced, flexible, deployable, interoperable and sustainable". Its role is to act as a stand-alone military force available for rapid deployment by the North Atlantic Treaty Organisation as a collective-defense, crisis-management or stabilization force, or to act as an initial entry force for a subsequent primary deployment. The NRF comprises land, air and sea components provided by NATO members. Contributed forces first train together and then become available for a 6-month period before being replaced by a new force.

The purpose of the NRF is to provide a quick reaction force of high quality to support NATO missions as required. The concept of NRF was first endorsed with a declaration of NATO's Heads of State at the Prague Summit on 22 November 2002. It was then approved by NATO Defence Ministers in June 2003, and the first headquarters created in October 2003 in Italy under command of NATO Joint Force Command in Brunssum
Brunssum
Brunssum is a municipality and a town in the province of Limburg, the Netherlands. Brunssum was formerly a center of coal mining in the Netherlands and there are a few active mines remaining in the area...
, Netherlands, designated NRF 1. Its rotation replacement was designated NRF 2 (2004) at the same time.

Although NRF 1 included personnel from 15 nations,
NRF was pronounced to have achieved Initial Operational Capability with 17,000 in 2004, and a success after participating in security operations for the Athens Olympics and Afghanistan elections. NRF 3 (2005) and NRF 4 (2006) confirmed popularity of the concept among NATO member states.
Only the command structure of the NRF became fully developed by October 2006. It succeeded a similar plan, the IRTF(L)
IRTF(L)
The Allied Command Europe Mobile Force - Land was a small NATO quick reaction force, headquartered at Heidelberg, Germany, active from 1960 to 2002...
, Immediate Reaction Task Force (Land). In February 2006 the NATO Defence Ministers met to seek a way for the NRF to achieve Full Operational Capability by the end of 2006.

The first elements of the NRF are able to deploy within five days, with the rest of the force capable of operating self-sufficiently for a period of 30 days. Depending on mission requirements, the NRF will operate either as an Initial Entry Force to facilitate the arrival of Follow-on-Forces, or as a Stand-alone Force. Within the full spectrum of NATO missions, the NRF may conduct the following types of missions:


To fulfill these tasks the NRF consists of a combined and joint force package that will be tailored to each specific mission. This force package is based on a brigade size land element (including special operations forces), a joint naval task force, and an air element capable of 200 combat missions per day. Accordingly, the NRF command and control structure consists of a Combined Joint Task Force
Joint Task Force
Joint Task Force is a PC real-time tactics game where players command military forces in combat situations based on modern day conflicts.The game includes officially licensed vehicles and weapons systems from major defense contractors including Boeing, Lockheed Martin, General Dynamics, Northrop...
Headquarters (CJTF HQ) with subordinated Land, Air and Maritime Component Commands (LCC/ACC/ MCC).

Forces participating in the NRF are drawn from the entire NATO Command and Force Structure. Forces will be assigned to the NRF on a rotational basis with the formal stand-by period lasting six months. Units that are assigned undergo a specialised 12-month preparation program that is split into the six months of unit training under national responsibility and six months of joint and combined training under the responsibility of the respective component command. After a successful final test, NATO's Supreme Allied Commander Europe (SACEUR) certifies the force.

Finland joined the NRF in March 2008. By October 2011, NRF was in its seventeenth generation.

Given the time required for bonding and cohesion to build in standard military units, it is questionable if six-month rotations are long enough to generate high unit cohesiveness in an international, joint-services force such as the NRF: