Encyclopedia
AS Estonian Air is Estonia's national carrier, owned by the Estonian state. The airline is based in Tallinn
Tallinn
Tallinn is the capital and largest city of Estonia. It occupies an area of with a population of 414,940. It is situated on the northern coast of the country, on the banks of the Gulf of Finland, south of Helsinki, east of Stockholm and west of Saint Petersburg. Tallinn's Old Town is in the list...
, Estonia
Estonia
Estonia , officially the Republic of Estonia , is a state in the Baltic region of Northern Europe. It is bordered to the north by the Gulf of Finland, to the west by the Baltic Sea, to the south by Latvia , and to the east by Lake Peipsi and the Russian Federation . Across the Baltic Sea lies...
. It is a regional airline feeding into the Scandinavian Airlines System
Scandinavian Airlines System
Scandinavian Airlines or SAS, previously Scandinavian Airlines System, is the flag carrier of Denmark, Norway and Sweden, and the largest airline in Scandinavia....
(SAS) network via Stockholm
Stockholm
Stockholm is the capital and the largest city of Sweden and constitutes the most populated urban area in Scandinavia. Stockholm is the most populous city in Sweden, with a population of 851,155 in the municipality , 1.37 million in the urban area , and around 2.1 million in the metropolitan area...
, Oslo
Oslo
Oslo is a municipality, as well as the capital and most populous city in Norway. As a municipality , it was established on 1 January 1838. Founded around 1048 by King Harald III of Norway, the city was largely destroyed by fire in 1624. The city was moved under the reign of Denmark–Norway's King...
and Copenhagen
Copenhagen
Copenhagen is the capital and largest city of Denmark, with an urban population of 1,199,224 and a metropolitan population of 1,930,260 . With the completion of the transnational Øresund Bridge in 2000, Copenhagen has become the centre of the increasingly integrating Øresund Region...
from Estonia.

The airline was established by the Estonian government with aircraft acquired from the defunct local Aeroflot
Aeroflot
OJSC AeroflotRussian Airlines , commonly known as Aeroflot , is the flag carrier and largest airline of the Russian Federation, based on passengers carried per year...
Division Estonian Air started operation on 1 December 1991 with service to Frankfurt
Frankfurt
Frankfurt am Main , commonly known simply as Frankfurt, is the largest city in the German state of Hesse and the fifth-largest city in Germany, with a 2010 population of 688,249. The urban area had an estimated population of 2,300,000 in 2010...
.

In 2008 three new destinations (Minsk, Munich and Rome) were served and the company announced that it was ordering 3 Bombardier CRJ900 NG and further 3 options. On 27 November 2008, Estonian Prime Minister Andrus Ansip
Andrus Ansip
Andrus Ansip is the current Prime Minister of Estonia, and chairman of the market liberal Estonian Reform Party .-Early life and career:...
announced that SAS had approached the Estonian government, urgently requesting a cash injection to save the airline and offering to buy out the government's stake in the airline. The Estonian government is reportedly in negotiations with ferry company Tallink
Tallink
Tallink is an Estonian shipping company currently operating Baltic Sea cruiseferries and ropax ships from Estonia to Finland, Estonia to Sweden, Latvia to Sweden and Finland to Germany. They also own Silja Line and a part of SeaRail...
to come up with a counter-proposal.

In 2009 Estonian Air gave up its Vienna, Frankfurt and Simferopol routes. The company closed its ground handling division. New destinations from Tallinn were Amsterdam, Berlin and St Peterburg, new route was Tartu–Stockholm.

As of 10 May 2010, the government of Estonia and SAS Scandinavian Airlines have agreed to a transaction where the Estonian government has provided additional 21 million EUR in capital to Estonian Air resulting in the stake of SAS in the carrier to decrease from 49% to 10%. At the same time, the two parties have agreed that the Estonian government gets an option to buy the remaining 10% stake from SAS at a later time between now and 2014. Estonian Air and SAS Scandinavian Airlines will continue to cooperate in the same fashion for the time being. The short-term aim of the government is to become a leading shareholder and to invest in the company to ensure it's future as Estonian Air is strategically important to the state. In September 2010, Estonian Air announced that they have finally signed an agreement with Bombardier, in which two CRJ-900 NextGen aircraft are going to be delivered in the beginning of 2011 (both planes were delivered in January 2011) and a third one in 2012. The agreement with SAS Scandinavian Airlines was signed on 10 September 2010 and it took effect on 27 October 2010 when Estonian Parliament
Riigikogu
The Riigikogu is the unicameral parliament of Estonia. All important state-related questions pass through the Riigikogu...
ratified 2010 state budget modifications, allocating needed funds for investment. 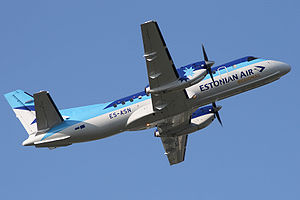 Travel Class is for passengers with Economy fare tickets. Free complimentary refreshments are offered: snacks, coffee, tea, water and juice on longer flights, and coffee, tea and water on flights which are shorter than one hour.

The Estonian Air fleet includes the following aircraft as of 27 November 2011:

Estonian Air has codeshare agreements with the following airlines:

Starting from 9 February 2010, Estonian Air is serving to all its Economy Class passengers complimentary refreshments: snacks, coffee, tea, water and juice on longer flights, and coffee, tea and water on flights which are shorter than one hour. Hot meals may be ordered for purchase in advance.