Childers was born in the Embankment Gardens, London, to a Protestant family originally from Glendalough
Glendalough
Glendalough or Glendaloch is a glacial valley in County Wicklow, Ireland. It is renowned for its Early Medieval monastic settlement founded in the 6th century by St Kevin, a hermit priest, and partly destroyed in 1398 by English troops....
, Ireland
Ireland
Ireland is an island to the northwest of continental Europe. It is the third-largest island in Europe and the twentieth-largest island on Earth...
. Although also born in England
England
England is a country that is part of the United Kingdom. It shares land borders with Scotland to the north and Wales to the west; the Irish Sea is to the north west, the Celtic Sea to the south west, with the North Sea to the east and the English Channel to the south separating it from continental...
, his father, Robert Erskine Childers
Robert Erskine Childers
Robert Erskine Childers DSC , universally known as Erskine Childers, was the author of the influential novel Riddle of the Sands and an Irish nationalist who smuggled guns to Ireland in his sailing yacht Asgard. He was executed by the authorities of the nascent Irish Free State during the Irish...
, had had an Irish mother and had been raised by an uncle in County Wicklow
County Wicklow
County Wicklow is a county in Ireland. It is part of the Mid-East Region and is also located in the province of Leinster. It is named after the town of Wicklow, which derives from the Old Norse name Víkingalág or Wykynlo. Wicklow County Council is the local authority for the county...
, and after the First World War took his family to live there. His mother, Mary Alden Childers was a Bostonian
Bostonian
A Bostonian is a resident of Boston or Greater Boston, Massachusetts, United States.Bostononian may also refer to:* Bostonian , an American Thoroughbred racehorse* The Bostonians, a novel by Henry James...
whose ancestors arrived on the Mayflower
Mayflower
The Mayflower was the ship that transported the English Separatists, better known as the Pilgrims, from a site near the Mayflower Steps in Plymouth, England, to Plymouth, Massachusetts, , in 1620...
. Robert Erskine Childers and his wife, Mary, later emerged as prominent and outspoken Irish Republican opponents of the political settlement with Britain which resulted in the establishment of the Irish Free State
Irish Free State
The Irish Free State was the state established as a Dominion on 6 December 1922 under the Anglo-Irish Treaty, signed by the British government and Irish representatives exactly twelve months beforehand...
.
Childers was educated at Gresham's School
Gresham's School
Gresham’s School is an independent coeducational boarding school in Holt in North Norfolk, England, a member of the HMC.The school was founded in 1555 by Sir John Gresham as a free grammar school for forty boys, following King Henry VIII's dissolution of the Augustinian priory at Beeston Regis...
, Holt
Holt, Norfolk
Holt is a market town and civil parish in the English county of Norfolk. The town is north of the city of Norwich, west of Cromer and east of King's Lynn. The town is on the route of the A148 King's Lynn to Cromer road. The nearest railway station is in the town of Sheringham where access to the...
, and the University of Cambridge
University of Cambridge
The University of Cambridge is a public research university located in Cambridge, United Kingdom. It is the second-oldest university in both the United Kingdom and the English-speaking world , and the seventh-oldest globally...
, hence his striking British upper class accent. In 1922, when Childers was sixteen, his father was executed by the new Irish Free State on politically-inspired charges of gun-possession.The pistol he had been found with had been given to him by Michael Collins. Before his execution, in a spirit of reconciliation, the older Childers obtained a promise from his son to seek out and shake the hand of every man who had signed the death warrant. After attending his father's funeral, Childers returned to Gresham's, then two years later he went on to Trinity College
Trinity College, Cambridge
Trinity College is a constituent college of the University of Cambridge. Trinity has more members than any other college in Cambridge or Oxford, with around 700 undergraduates, 430 graduates, and over 170 Fellows...
, Cambridge
Cambridge
The city of Cambridge is a university town and the administrative centre of the county of Cambridgeshire, England. It lies in East Anglia about north of London. Cambridge is at the heart of the high-technology centre known as Silicon Fen – a play on Silicon Valley and the fens surrounding the...
. 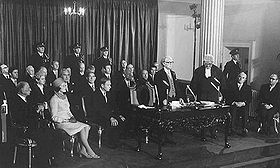 After finishing his education, he worked for a period in a tourism board in Paris until the then Taoiseach of Ireland Éamon de Valera
Éamon de Valera
Éamon de Valera was one of the dominant political figures in twentieth century Ireland, serving as head of government of the Irish Free State and head of government and head of state of Ireland...
invited him back to Ireland to work for the Irish Press. He became a naturalised Irish citizen in 1938. A member of Fianna Fáil
Fianna Fáil
Fianna Fáil – The Republican Party , more commonly known as Fianna Fáil is a centrist political party in the Republic of Ireland, founded on 23 March 1926. Fianna Fáil's name is traditionally translated into English as Soldiers of Destiny, although a more accurate rendition would be Warriors of Fál...
, he held a number of ministerial posts in the cabinets of Éamon de Valera, Seán Lemass
Seán Lemass
Seán Francis Lemass was one of the most prominent Irish politicians of the 20th century. He served as Taoiseach from 1959 until 1966....
and Jack Lynch
Jack Lynch
John Mary "Jack" Lynch was the Taoiseach of Ireland, serving two terms in office; from 1966 to 1973 and 1977 to 1979....
, becoming Tánaiste
Tánaiste
The Tánaiste is the deputy prime minister of Ireland. The current Tánaiste is Eamon Gilmore, TD who was appointed on 9 March 2011.- Origins and etymology :...
in 1969. Erskine's period as a minister was controversial. One commentator described his ministerial career as "spectacularly unsuccessful". Others praised his willingness to take tough decisions. He was outspoken in his opposition to Charles Haughey
Charles Haughey
Charles James "Charlie" Haughey was Taoiseach of Ireland, serving three terms in office . He was also the fourth leader of Fianna Fáil...
in the aftermath of the Arms Crisis
Arms Crisis
The Arms Crisis or Arms Trial was a political scandal in the Republic of Ireland in 1970, when two cabinet ministers — Charles Haughey and Neil Blaney — were sacked for allegedly attempting to illegally import arms for the Irish Republican Army in Northern Ireland.-Background:The...
, when Haughey and another minister, both having been sacked, were sent for trial amid allegations of a plot to import arms for the Provisional IRA. (Haughey and the other minister, Neil Blaney
Neil Blaney
Neil Terence Columba Blaney was a senior Irish politician. He was first elected to Dáil Éireann in 1948 as a Fianna Fáil Teachta Dála representing Donegal East. Blaney served as Minister for Posts and Telegraphs , Minister for Local Government and Minister for Agriculture and Fisheries...
, were both acquitted.)

In a political upset, Childers was elected the fourth President of Ireland on 30 May 1973, defeating Tom O'Higgins
Tom O'Higgins
Thomas Francis O'Higgins was an Irish Fine Gael politician, a barrister and a judge.Tom O'Higgins was born in Cork in 1916. He was the son of Thomas F. O'Higgins and the nephew of Kevin O'Higgins...
by 635,867 votes to 578,771. Childers, though 67, was a vibrant, extremely hard-working president who earned universal respect and popularity, in the process making the office of President a highly visible and useful institution. However, he died suddenly of a heart attack in November 1974, while making a public speech to the Royal College of Physicians
Royal College of Physicians of Ireland
The Royal College of Physicians of Ireland , was founded in 1654 and is a postgraduate medical organisation comprising Members and Fellows...
in Dublin. 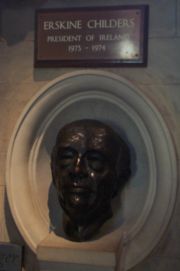 Childers's state funeral in St. Patrick's Cathedral, Dublin
St. Patrick's Cathedral, Dublin
Saint Patrick's Cathedral , or more formally, the Cathedral of the Blessed Virgin Mary and St Patrick is a cathedral of the Church of Ireland in Dublin, Ireland which was founded in 1191. The Church has designated it as The National Cathedral of Ireland...
, was attended by world leaders including the Earl Mountbatten of Burma
Louis Mountbatten, 1st Earl Mountbatten of Burma
Admiral of the Fleet Louis Francis Albert Victor Nicholas George Mountbatten, 1st Earl Mountbatten of Burma, KG, GCB, OM, GCSI, GCIE, GCVO, DSO, PC, FRS , was a British statesman and naval officer, and an uncle of Prince Philip, Duke of Edinburgh...
(representing Queen Elizabeth II
Elizabeth II of the United Kingdom
Elizabeth II is the constitutional monarch of 16 sovereign states known as the Commonwealth realms: the United Kingdom, Canada, Australia, New Zealand, Jamaica, Barbados, the Bahamas, Grenada, Papua New Guinea, the Solomon Islands, Tuvalu, Saint Lucia, Saint Vincent and the Grenadines, Belize,...
), the Prime Minister of the United Kingdom
Prime Minister of the United Kingdom
The Prime Minister of the United Kingdom of Great Britain and Northern Ireland is the Head of Her Majesty's Government in the United Kingdom. The Prime Minister and Cabinet are collectively accountable for their policies and actions to the Sovereign, to Parliament, to their political party and...
and leader of the Opposition, and presidents and crowned heads of state from Europe and beyond. He was buried in the grounds of the Church of Ireland
Church of Ireland
The Church of Ireland is an autonomous province of the Anglican Communion. The church operates in all parts of Ireland and is the second largest religious body on the island after the Roman Catholic Church...
Derralossary church in Roundwood
Roundwood
Roundwood, historically known as Tochar , is a village in County Wicklow, Ireland. It was listed as having a population of 589 in the census of 2006....
, County Wicklow
County Wicklow
County Wicklow is a county in Ireland. It is part of the Mid-East Region and is also located in the province of Leinster. It is named after the town of Wicklow, which derives from the Old Norse name Víkingalág or Wykynlo. Wicklow County Council is the local authority for the county...
.

Childers married Ruth Ellen Dow in 1925. They had five children, Ruth Ellen Childers, born in July 1927, Erskine
Erskine Childers (UN)
Erskine Barton Childers was a writer, BBC correspondent and United Nations senior civil servant. He was the eldest son of Erskine Hamilton Childers and Ruth Ellen Dow Childers...
, born in March 1929, followed by Roderick Winthrop Childers in June 1931, and in November 1937 twin daughters, Carainn and Margaret Osgood Childers. After the death of Dow in 1950, Childers married again, in 1952, to Rita Dudley. Together they had a daughter, Nessa
Nessa Childers
Nessa Maria Vereker Childers is an Irish Labour Party politician who is currently a Member of the European Parliament for the East constituency....
, who is currently a Labour Party MEP
Member of the European Parliament
A Member of the European Parliament is a person who has been elected to the European Parliament. The name of MEPs differ in different languages, with terms such as europarliamentarian or eurodeputy being common in Romance language-speaking areas.When the European Parliament was first established,...
. Childers is survived by children from both his marriages. Rita Dudley
Rita Childers
Margaret "Rita" Childers was the second wife of Erskine Hamilton Childers, the fourth President of Ireland . She formerly worked as a press attaché in the British Embassy in Dublin...
died on 9 May 2010.