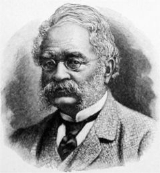 Encyclopedia
Ernst Werner Siemens, von Siemens since 1888, (13 December 1816 – 6 December 1892) was a German inventor and industrialist. Siemens' name has been adopted as the SI
Si
Si, si, or SI may refer to :- Measurement, mathematics and science :* International System of Units , the modern international standard version of the metric system...
unit of electrical conductance, the siemens
Siemens (unit)
The siemens is the SI derived unit of electric conductance and electric admittance. Conductance and admittance are the reciprocals of resistance and impedance respectively, hence one siemens is equal to the reciprocal of one ohm, and is sometimes referred to as the mho. In English, the term...
. He was also the founder of the electrical and telecommunications company Siemens
Siemens
Siemens may refer toSiemens, a German family name carried by generations of telecommunications industrialists, including:* Werner von Siemens , inventor, founder of Siemens AG...
.

Werner Siemens was born in Lenthe, today part of Gehrden
Gehrden
Gehrden is a town in the district of Hanover, in Lower Saxony, Germany. It is situated approx. southwest of Hanover.- References :...
, near Hannover, Germany, the fourth child (of fourteen) of a tenant farmer
Farmer
A farmer is a person engaged in agriculture, who raises living organisms for food or raw materials, generally including livestock husbandry and growing crops, such as produce and grain...
. He is a brother of Carl Heinrich von Siemens
Carl Heinrich von Siemens
Carl Heinrich von Siemens was a German entrepreneur, a child of a tenant farmer. He is a brother of Ernst Werner von Siemens and William Siemens, sons of Christian Ferdinand Siemens and wife Eleonore Deichmann...
and Carl Wilhelm Siemens
Carl Wilhelm Siemens
Carl Wilhelm Siemens was a German born engineer who for most of his life worked in Britain and later became a British subject.-Biography:...
, sons of Christian Ferdinand Siemens (31 July 1787 - 16 January 1840) and wife Eleonore Deichmann (1792 - 8 July 1839).

Siemens left school without finishing his education, but joined the army to undertake training in engineering
Engineering
Engineering is the discipline, art, skill and profession of acquiring and applying scientific, mathematical, economic, social, and practical knowledge, in order to design and build structures, machines, devices, systems, materials and processes that safely realize improvements to the lives of...
. Siemens was thought of as a good soldier, receiving various medals. Upon returning home from war, he put his mind to other uses. He is known world-wide for his advances in various technologies, and chose to work on perfecting technologies that had already been established. Siemens invented a telegraph
Telegraphy
Telegraphy is the long-distance transmission of messages via some form of signalling technology. Telegraphy requires messages to be converted to a code which is known to both sender and receiver...
that used a needle to point to the right letter, instead of using Morse code
Morse code
Morse code is a method of transmitting textual information as a series of on-off tones, lights, or clicks that can be directly understood by a skilled listener or observer without special equipment...
. Based on this invention, he founded the company Telegraphen-Bauanstalt von Siemens & Halske on 1 October 1847, with the company taking occupation of its workshop on 12 October.

The company was internationalised soon after its founding. One brother of Werner represented him in England (Sir William Siemens
Carl Wilhelm Siemens
Carl Wilhelm Siemens was a German born engineer who for most of his life worked in Britain and later became a British subject.-Biography:...
) and another in St.Petersburg, Russia
Russia
Russia or , officially known as both Russia and the Russian Federation , is a country in northern Eurasia. It is a federal semi-presidential republic, comprising 83 federal subjects...
(Carl von Siemens
Carl Heinrich von Siemens
Carl Heinrich von Siemens was a German entrepreneur, a child of a tenant farmer. He is a brother of Ernst Werner von Siemens and William Siemens, sons of Christian Ferdinand Siemens and wife Eleonore Deichmann...
), each earning separate recognition in their own right. Following his industrial career, he was ennobled in 1888, becoming Werner von Siemens. He retired from his company in 1890 and died in 1892 in Berlin.

Apart from the pointer telegraph Siemens made several contributions to the development of electrical engineering
Electrical engineering
Electrical engineering is a field of engineering that generally deals with the study and application of electricity, electronics and electromagnetism. The field first became an identifiable occupation in the late nineteenth century after commercialization of the electric telegraph and electrical...
and is therefore known as the founding father of the discipline in Germany. He built the world's first electric elevator
Elevator
An elevator is a type of vertical transport equipment that efficiently moves people or goods between floors of a building, vessel or other structures...
in 1880. His company produced the tubes with which Wilhelm Conrad Roentgen investigated x-rays. He claimed invention of the dynamo
Dynamo
- Engineering :* Dynamo, a magnetic device originally used as an electric generator* Dynamo theory, a theory relating to magnetic fields of celestial bodies* Solar dynamo, the physical process that generates the Sun's magnetic field- Software :...
although others invented it earlier. On 14 December 1877 he received German patent No. 2355 for an electromechanical "dynamic" or moving-coil transducer, which was adapted by A. L. Thuras and E. C. Wente for the Bell System
Bell System
The Bell System was the American Bell Telephone Company and then, subsequently, AT&T led system which provided telephone services to much of the United States and Canada from 1877 to 1984, at various times as a monopoly. In 1984, the company was broken up into separate companies, by a U.S...
in the late 1920s for use as a loudspeaker
Loudspeaker
A loudspeaker is an electroacoustic transducer that produces sound in response to an electrical audio signal input. Non-electrical loudspeakers were developed as accessories to telephone systems, but electronic amplification by vacuum tube made loudspeakers more generally useful...
. Wente's adaptation was issued US patent 1,707,545 in 1929. Siemens is also the father of the trolleybus
Trolleybus
A trolleybus is an electric bus that draws its electricity from overhead wires using spring-loaded trolley poles. Two wires and poles are required to complete the electrical circuit...
which he initially tried and tested with his "Elektromote
Elektromote
The Electromote was the world's first vehicle run like a trolleybus, which was first presented to the public on April 29, 1882, by its inventor Dr. Ernst Werner von Siemens in Halensee, a suburb of Berlin, Germany. The Elektromote operated from April 29 to June 13, 1882, on a 540 m ...
" on 29 April 1882.