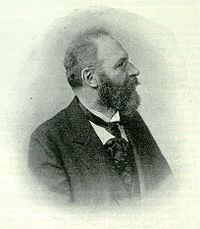 Friedrich Heinrich Philipp Franz von Hefner-Alteneck (April 27, 1845 in Aschaffenburg
Aschaffenburg
Aschaffenburg is a city in northwest Bavaria, Germany. The town of Aschaffenburg is not considered part of the district of Aschaffenburg, but is the administrative seat.Aschaffenburg is known as the Tor zum Spessart or "gate to the Spessart"...
– January 6, 1904 in Biesdorf
Biesdorf
Biesdorf is a municipality in the district of Bitburg-Prüm, in Rhineland-Palatinate, western Germany....
near Berlin) was a German electrical engineer and one of the closest aides of Werner von Siemens. He is largely remembered for the invention of the Hefner lamp
Hefner lamp
The Hefner lamp, or in German Hefnerkerze, is a flame lamp used in photometry that burns amyl acetate.The lamp was invented by Friedrich von Hefner-Alteneck in 1884 and he proposed its use as a standard flame for photometric purposes with a luminous intensity unit of the Hefnerkerze...
, which provided the measure of luminous intensity
Luminous intensity
In photometry, luminous intensity is a measure of the wavelength-weighted power emitted by a light source in a particular direction per unit solid angle, based on the luminosity function, a standardized model of the sensitivity of the human eye...
used in Germany, Austria and Scandinavia from 1890 to 1942. The measure was called the Hefnerkerze (HK). The Hefnerkerze was superseded in the 1940s by the modern SI
Si
Si, si, or SI may refer to :- Measurement, mathematics and science :* International System of Units , the modern international standard version of the metric system...
unit, the candela
Candela
The candela is the SI base unit of luminous intensity; that is, power emitted by a light source in a particular direction, weighted by the luminosity function . A common candle emits light with a luminous intensity of roughly one candela...
.