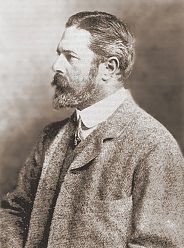 Ernest William Lyons Holt (October 17, 1864 – June 10, 1922) was an eminent English
England
England is a country that is part of the United Kingdom. It shares land borders with Scotland to the north and Wales to the west; the Irish Sea is to the north west, the Celtic Sea to the south west, with the North Sea to the east and the English Channel to the south separating it from continental...
marine naturalist
Natural history
Natural history is the scientific research of plants or animals, leaning more towards observational rather than experimental methods of study, and encompasses more research published in magazines than in academic journals. Grouped among the natural sciences, natural history is the systematic study...
and biologist
Biologist
A biologist is a scientist devoted to and producing results in biology through the study of life. Typically biologists study organisms and their relationship to their environment. Biologists involved in basic research attempt to discover underlying mechanisms that govern how organisms work...
specialized in ichthyology
Ichthyology
Ichthyology is the branch of zoology devoted to the study of fish. This includes skeletal fish , cartilaginous fish , and jawless fish...
, the study of fish
Fish
Fish are a paraphyletic group of organisms that consist of all gill-bearing aquatic vertebrate animals that lack limbs with digits. Included in this definition are the living hagfish, lampreys, and cartilaginous and bony fish, as well as various extinct related groups...
. His work helped lay a scientific foundation for the fishery management in Ireland
Ireland
Ireland is an island to the northwest of continental Europe. It is the third-largest island in Europe and the twentieth-largest island on Earth...
, and together with William Spotswood Green
William Spotswood Green
William Spotswood Green was an Irish naturalist, specialized on marine biology.Born at Youghal and educated at Trinity College in Dublin, he was ordained a priest in 1873. Already before he left the services of the Church in 1890, he had worked on marine biology...
, he strongly influenced the development of the Irish Fisheries in its early years.

Holt was born in London
London
London is the capital city of :England and the :United Kingdom, the largest metropolitan area in the United Kingdom, and the largest urban zone in the European Union by most measures. Located on the River Thames, London has been a major settlement for two millennia, its history going back to its...
and was educated at Eton
Eton College
Eton College, often referred to simply as Eton, is a British independent school for boys aged 13 to 18. It was founded in 1440 by King Henry VI as "The King's College of Our Lady of Eton besides Wyndsor"....
, where he won a prize in biology. After school, he entered the British Army
British Army
The British Army is the land warfare branch of Her Majesty's Armed Forces in the United Kingdom. It came into being with the unification of the Kingdom of England and Scotland into the Kingdom of Great Britain in 1707. The new British Army incorporated Regiments that had already existed in England...
, enrolling at Sandhurst
Royal Military Academy Sandhurst
The Royal Military Academy Sandhurst , commonly known simply as Sandhurst, is a British Army officer initial training centre located in Sandhurst, Berkshire, England...
and, his training completed, was posted to the Duke of Cornwall's Light Infantry
Duke of Cornwall's Light Infantry
The Duke of Cornwall's Light Infantry was an infantry regiment of the British Army from 1881 to 1959. Its lineage is continued today by The Rifles....
. He participated in the Nile Campaign (1884/85) and then in the Third Burmese War of 1886/87. During that latter campaign, he fell sick and was invalided home. Back in civilian life, Holt began studying zoology
Zoology
Zoology |zoölogy]]), is the branch of biology that relates to the animal kingdom, including the structure, embryology, evolution, classification, habits, and distribution of all animals, both living and extinct...
at the University
University of St Andrews
The University of St Andrews, informally referred to as "St Andrews", is the oldest university in Scotland and the third oldest in the English-speaking world after Oxford and Cambridge. The university is situated in the town of St Andrews, Fife, on the east coast of Scotland. It was founded between...
of St. Andrews in 1888.

Two years later, he participated as assistant-naturalist in a fishery survey on the west coast of Ireland, organized by the Royal Dublin Society
Royal Dublin Society
The Royal Dublin Society was founded on 25 June 1731 to "to promote and develop agriculture, arts, industry, and science in Ireland". The RDS is synonymous with its main premises in Ballsbridge in Dublin, Ireland...
. This expedition was led by William Spotswood Green
William Spotswood Green
William Spotswood Green was an Irish naturalist, specialized on marine biology.Born at Youghal and educated at Trinity College in Dublin, he was ordained a priest in 1873. Already before he left the services of the Church in 1890, he had worked on marine biology...
, with whom Holt would work together for much of his later career. That survey made Holt's name as an ichthyologist; he published not only several papers on the eggs and the early larval stages of fish but also wrote the general report of the expedition. As a result of Green's and Holt's work, the government instituted a formal program of fishery surveys under the auspice of the newly formed Congested Districts Board
Congested Districts Board for Ireland
The Congested Districts Board for Ireland was established by the Chief Secretary, Arthur Balfour in 1891 to alleviate poverty and "congested" living conditions in the west of Ireland....
in 1892. Green became the board's Chief Inspector of Fisheries, while Holt participated as a scientific advisor, although he would leave Ireland for a few years.

Holt joined the Marine Biological Association (MBA) and worked until 1894 at Grimsby
Grimsby
Grimsby is a seaport on the Humber Estuary in Lincolnshire, England. It has been the administrative centre of the unitary authority area of North East Lincolnshire since 1996...
, where he was in charge of a newly openend research station for the North Sea
North Sea
In the southwest, beyond the Straits of Dover, the North Sea becomes the English Channel connecting to the Atlantic Ocean. In the east, it connects to the Baltic Sea via the Skagerrak and Kattegat, narrow straits that separate Denmark from Norway and Sweden respectively...
. After a brief stint at the Station zoologique d'Endoumes at Marseille
Marseille
Marseille , known in antiquity as Massalia , is the second largest city in France, after Paris, with a population of 852,395 within its administrative limits on a land area of . The urban area of Marseille extends beyond the city limits with a population of over 1,420,000 on an area of...
he then worked for three years at the Plymouth
Plymouth
Plymouth is a city and unitary authority area on the coast of Devon, England, about south-west of London. It is built between the mouths of the rivers Plym to the east and Tamar to the west, where they join Plymouth Sound...
Marine Laboratory. Nevertheless, E. W. L. Holt maintained his ties with Ireland, and in 1895 he purchased a dismasted brigantine
Brigantine
In sailing, a brigantine or hermaphrodite brig is a vessel with two masts, only the forward of which is square rigged.-Origins of the term:...
named Saturn for the Royal Dublin Society and had it equipped as a marine biology research station. In 1899, he returned to Ireland, taking charge of the Saturn and her four small auxiliary sailing boats used for sampling. The floating laboratory was stationed in the Connemara
Connemara
Connemara is a district in the west of Ireland consisting of a broad peninsula between Killary Harbour and Kilkieran Bay in the west of County Galway.-Overview:...
district in County Galway
County Galway
County Galway is a county in Ireland. It is located in the West Region and is also part of the province of Connacht. It is named after the city of Galway. Galway County Council is the local authority for the county. There are several strongly Irish-speaking areas in the west of the county...
; it lay at Ballynakill in winter and was towed to Inishbofin
Inishbofin, Galway
Inishbofin is an island lying about off the coast of Connemara, County Galway, Ireland. It is about 5.5 km long and wide, and has around 200 inhabitants. The island is popular with artists. Inishbofin can be reached by ferry from the pier in Cleggan...
for the summer months. In 1900, the Saturn was transferred to the new Department of Agriculture and Technical Instruction for Ireland. Green became Chief Inspector of its Fisheries Branch; Holt was at first scientific advisor and later, as of 1908, Fisheries Inspector. They were joined by other young biologists, among them Rowland Southern
Rowland Southern
Rowland Southern was an English aquatic biologist who specialised in the study of the fresh-water and marine life, particularly segmented worms of Ireland. He trained in England as a chemist and upon moving to Dublin received a post with the City Analyst...
and George Philip Farrar.

With the department's research and fisheries protection vessel Helga they continued their surveys of the west coast of Ireland. In 1908, the ship was replaced by a new one, the Helga II, which was built to the specifications of Green and Holt. With Holt's backing, the new ship participated in the Clare Island Survey
Clare Island
Clare Island is a mountainous island guarding the entrance to Clew Bay in County Mayo, Ireland. It is famous as the home of the pirate queen, Gráinne O'Malley...
of 1909–1911. When that was completed, the Helga II returned to her regular fisheries research and protection duties under the direction of Holt.

When Green retired in 1914, Holt succeeded him as Chief Inspector. Scientific work was stopped when World War I
World War I
World War I , which was predominantly called the World War or the Great War from its occurrence until 1939, and the First World War or World War I thereafter, was a major war centred in Europe that began on 28 July 1914 and lasted until 11 November 1918...
broke out, and the administrative duties of his post did not allow Holt to continue research work of his own. After the war, the political changes in Ireland as well as Holt's failing health prevented further serious research. In May 1922, Holt became seriously ill and left Dublin for London, where he died on June 10 that year of Bright's disease
Bright's disease
Bright's disease is a historical classification of kidney diseases that would be described in modern medicine as acute or chronic nephritis. The term is no longer used, as diseases are now classified according to their more fully understood causes....
(an old term for glomerulonephritis
Glomerulonephritis
Glomerulonephritis, also known as glomerular nephritis, abbreviated GN, is a renal disease characterized by inflammation of the glomeruli, or small blood vessels in the kidneys...
, a kidney disease). In 1949, the MBA put into service a research vessel named after him.