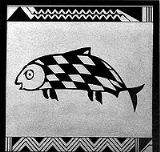 Overview
Ichthyology is the branch of zoology
Zoology
Zoology |zoölogy]]), is the branch of biology that relates to the animal kingdom, including the structure, embryology, evolution, classification, habits, and distribution of all animals, both living and extinct...
devoted to the study of fish
Fish
Fish are a paraphyletic group of organisms that consist of all gill-bearing aquatic vertebrate animals that lack limbs with digits. Included in this definition are the living hagfish, lampreys, and cartilaginous and bony fish, as well as various extinct related groups...
. This includes skeletal fish (Osteichthyes
Osteichthyes
Osteichthyes , also called bony fish, are a taxonomic group of fish that have bony, as opposed to cartilaginous, skeletons. The vast majority of fish are osteichthyes, which is an extremely diverse and abundant group consisting of over 29,000 species...
), cartilaginous fish (Chondrichthyes
Chondrichthyes
Chondrichthyes or cartilaginous fishes are jawed fish with paired fins, paired nares, scales, two-chambered hearts, and skeletons made of cartilage rather than bone...
), and jawless fish (Agnatha
Agnatha
Agnatha is a superclass of jawless fish in the phylum Chordata, subphylum Vertebrata. The group excludes all vertebrates with jaws, known as gnathostomes....
). While a majority of species have probably been discovered and described, approximately 250 new species are officially described by science each year. According to FishBase
FishBase
FishBase is a comprehensive database of information about fish species . It is the largest and most extensively accessed online database on adult finfish on the web...
, 31,500 species of fish had been described by January 2010. There are more fish species than the combined total of all other vertebrates: mammals, amphibians, reptiles and birds.

The practice of ichthyology is associated with marine biology
Marine biology
Marine biology is the scientific study of organisms in the ocean or other marine or brackish bodies of water. Given that in biology many phyla, families and genera have some species that live in the sea and others that live on land, marine biology classifies species based on the environment rather...
, limnology
Limnology
Limnology , also called freshwater science, is the study of inland waters. It is often regarded as a division of ecology or environmental science. It covers the biological, chemical, physical, geological, and other attributes of all inland waters...
and fisheries science
Fisheries science
Fisheries science is the academic discipline of managing and understanding fisheries. It is a multidisciplinary science, which draws on the disciplines of oceanography, marine biology, marine conservation, ecology, population dynamics, economics and management to attempt to provide an integrated...
.
The study of fish dates from the Upper Paleolithic Revolution
Upper Paleolithic
The Upper Paleolithic is the third and last subdivision of the Paleolithic or Old Stone Age as it is understood in Europe, Africa and Asia. Very broadly it dates to between 40,000 and 10,000 years ago, roughly coinciding with the appearance of behavioral modernity and before the advent of...
(with the advent of 'high culture').

I am curious is there any anatomical features that predatory his have that distingish themselves from the scavengers or non-predatory fish? If I reca...
More
x