Encyclopedia
The epithelial sodium channel (short: ENaC, also: sodium channel non-neuronal 1 (SCNN1) or amiloride sensitive sodium channel (ASSC)) is a membrane-bound ion-channel that is permeable for Li+-ions
Lithium
Lithium is a soft, silver-white metal that belongs to the alkali metal group of chemical elements. It is represented by the symbol Li, and it has the atomic number 3. Under standard conditions it is the lightest metal and the least dense solid element. Like all alkali metals, lithium is highly...
, proton
Proton
The proton is a subatomic particle with the symbol or and a positive electric charge of 1 elementary charge. One or more protons are present in the nucleus of each atom, along with neutrons. The number of protons in each atom is its atomic number....
s and especially Na+-ions
Sodium
Sodium is a chemical element with the symbol Na and atomic number 11. It is a soft, silvery-white, highly reactive metal and is a member of the alkali metals; its only stable isotope is 23Na. It is an abundant element that exists in numerous minerals, most commonly as sodium chloride...
. It is a constitutively active ion-channel. It is arguably the most selective ion channel.

The apical membrane of many tight epithelia contains sodium channels that are primarily characterised by their high affinity to the diuretic blocker amiloride
Amiloride
Amiloride is a potassium-sparing diuretic, first approved for use in 1967 , used in the management of hypertension and congestive heart failure. Amiloride was also tested as treatment of cystic fibrosis, but it was revealed inefficient in vivo due to it's short time of action, therefore...
. These channels mediate the first step of active sodium reabsorption essential for the maintenance of body salt and water homeostasis. In vertebrates, the channels control reabsorption of sodium in kidney, colon, lung
and sweat glands; they also play a role in taste perception.

ENaC is located in the apical membrane of polarized epithelial cells particularly in the kidney
Kidney
The kidneys, organs with several functions, serve essential regulatory roles in most animals, including vertebrates and some invertebrates. They are essential in the urinary system and also serve homeostatic functions such as the regulation of electrolytes, maintenance of acid–base balance, and...
(primarily in the collecting tubules), the lung
Lung
The lung is the essential respiration organ in many air-breathing animals, including most tetrapods, a few fish and a few snails. In mammals and the more complex life forms, the two lungs are located near the backbone on either side of the heart...
and the colon
Colon (anatomy)
The colon is the last part of the digestive system in most vertebrates; it extracts water and salt from solid wastes before they are eliminated from the body, and is the site in which flora-aided fermentation of unabsorbed material occurs. Unlike the small intestine, the colon does not play a...
. It is involved in the transepithelial Na+-ion transport
Renal sodium reabsorption
Renal reabsorption of sodium is a part of renal physiology. It uses Na-H antiport, Na-glucose symport, sodium ion channels . It is stimulated by angiotensin II and aldosterone, and inhibited by atrial natriuretic peptide....
, which it accomplishes together with the Na+/K+-ATPase
Na+/K+-ATPase
Na+/K+-ATPase is an enzyme located in the plasma membrane in all animals.- Sodium-potassium pumps :Active transport is responsible for cells containing relatively high...
.

It plays a major role in the Na+- and K+-ion homeostasis
Homeostasis
Homeostasis is the property of a system that regulates its internal environment and tends to maintain a stable, constant condition of properties like temperature or pH...
of blood
Blood
Blood is a specialized bodily fluid in animals that delivers necessary substances such as nutrients and oxygen to the cells and transports metabolic waste products away from those same cells....
, epithelia and extraepithelial fluids by resorption of Na+-ions. The activity of ENaC in colon and kidney is modulated by the mineralcorticoid aldosterone
Aldosterone
Aldosterone is a hormone that increases the reabsorption of sodium ions and water and the release of potassium in the collecting ducts and distal convoluted tubule of the kidneys' functional unit, the nephron. This increases blood volume and, therefore, increases blood pressure. Drugs that...
. It can be blocked by either triamterene or amiloride
Amiloride
Amiloride is a potassium-sparing diuretic, first approved for use in 1967 , used in the management of hypertension and congestive heart failure. Amiloride was also tested as treatment of cystic fibrosis, but it was revealed inefficient in vivo due to it's short time of action, therefore...
, which are used medically to serve as diuretics. In the kidney it is inhibited by atrial natriuretic peptide
Atrial natriuretic peptide
Atrial natriuretic peptide , atrial natriuretic factor , atrial natriuretic hormone , or atriopeptin, is a powerful vasodilator, and a protein hormone secreted by heart muscle cells. It is involved in the homeostatic control of body water, sodium, potassium and fat...
, causing natriuresis and diuresis.

ENaC can furthermore be found in taste
Taste
Taste is one of the traditional five senses. It refers to the ability to detect the flavor of substances such as food, certain minerals, and poisons, etc....
receptor cells, where it plays an important role in salt
Salt
In chemistry, salts are ionic compounds that result from the neutralization reaction of an acid and a base. They are composed of cations and anions so that the product is electrically neutral...
taste perception. In rodents virtually the entire salt taste is mediated by ENaC, whereas it seems to play a less significant role in humans: about 20 percent can be accredited to the epithelial sodium channel. 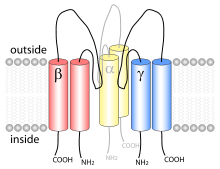 ENaC consists of three different subunits: α, β, γ. The stoichiometry of these subunits is still to be verified, but ENaC is very likely to be a heterotrimeric protein
Protein
Proteins are biochemical compounds consisting of one or more polypeptides typically folded into a globular or fibrous form, facilitating a biological function. A polypeptide is a single linear polymer chain of amino acids bonded together by peptide bonds between the carboxyl and amino groups of...
like the recently analyzed acid-sensing ion channel 1 (ASIC1)
Acid-sensing ion channel
Acid-sensing ion channels are neuronal voltage-insensitive cationic channels activated by extracellular protons. ASIC proteins are a subfamily of the ENaC/Deg superfamily of proteins. To date six proteins of the ASIC family have been identified that arise from four genes, ASIC1, ASIC2, ASIC3, and...
, which belongs to the same family. Each of the subunits consists of two transmembrane helices and an extracellular loop. The amino- and carboxy-termini of all polypeptides are located in the cytosol
Cytosol
The cytosol or intracellular fluid is the liquid found inside cells, that is separated into compartments by membranes. For example, the mitochondrial matrix separates the mitochondrion into compartments....
.

Structurally, the proteins that belong to this family consist of about 510 to 920 amino acid residues. They are made of an intracellular N-terminus region followed by a transmembrane domain, a large extracellular loop, a second transmembrane segment and a C-terminal intracellular tail.

In addition there is a fourth, so-called δ-subunit, that shares considerable sequence similarity with the α-subunit and can form a functional ion-channel together with the β- and γ-subunits. Such δ, β, γ-ENaC appears in pancreas
Pancreas
The pancreas is a gland organ in the digestive and endocrine system of vertebrates. It is both an endocrine gland producing several important hormones, including insulin, glucagon, and somatostatin, as well as a digestive organ, secreting pancreatic juice containing digestive enzymes that assist...
, testes
Testicle
The testicle is the male gonad in animals. Like the ovaries to which they are homologous, testes are components of both the reproductive system and the endocrine system...
and ovaries
Ovary
The ovary is an ovum-producing reproductive organ, often found in pairs as part of the vertebrate female reproductive system. Ovaries in anatomically female individuals are analogous to testes in anatomically male individuals, in that they are both gonads and endocrine glands.-Human anatomy:Ovaries...
. Their function is yet unknown.

Members of the epithelial Na+ channel (ENaC) family fall into four subfamilies, termed alpha, beta, gamma and delta. The proteins exhibit the same apparent topology, each with two transmembrane (TM) spanning segments, separated by a large extracellular loop. In most ENaC proteins studied to date, the extracellular domains are highly conserved and contain numerous cysteine residues, with flanking C-terminal amphipathic TM regions, postulated to contribute to the formation of the hydrophilic pores of the oligomeric channel protein complexes. It is thought that the well-conserved extracellular domains serve as receptors to control the activities of the channels.

The exon–intron architecture of the three genes encoding the three subunits of ENaC have remained highly conserved despite the divergence of their sequences.

In the airways, CFTR allows for the secretion of chloride, and sodium ions and water follow passively. However, in the absence of functional CFTR, the ENaC channel is upregulated, and further decreases salt and water secretion by reabsorbing sodium ions. As such, the respiratory complications in cystic fibrosis are not solely caused by the lack of chloride secretion, but instead by the increase in sodium and water reabsorption. This results in the deposition of thick, dehydrated mucus, which collects in the respiratory tract, interfering with gas exchange and allowing for the collection of bacteria.

In sweat glands, CFTR is responsible for the reabsorption of chloride in the sweat duct. Sodium ions follow passively through ENaC as a result of the electrochemical gradient caused by chloride flow. This reduces salt and water loss. In the absence of chloride flow in cystic fibrosis, sodium ions do not flow through ENaC, leading to greater salt and water loss. (This is true despite upregulation of the ENaC channel, as flow in the sweat ducts is limited by the electrochemical gradient set up by chloride flow through CFTR.) As such, patients' skin tastes salty, and this is commonly used to help diagnose the disease, both in the past and today by modern electrical tests.