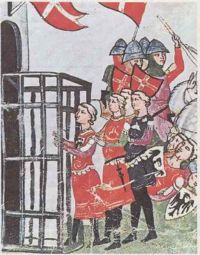 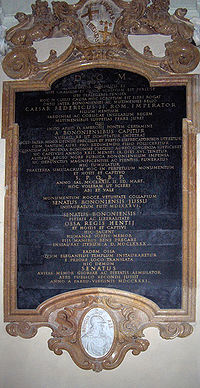 Enzio (Italianisation of Heinz, diminutive of Heinrich) (c. 1218–1272) was an illegitimate son of Emperor Frederick II
Frederick II, Holy Roman Emperor
Frederick II , was one of the most powerful Holy Roman Emperors of the Middle Ages and head of the House of Hohenstaufen. His political and cultural ambitions, based in Sicily and stretching through Italy to Germany, and even to Jerusalem, were enormous...
and King of Sardinia.

Enzio was an illegitimate son of Frederick II by a certain Adelaide. It is speculated that she was Adelaide of Urslingen. He was the eldest of the illegitimate sons of the emperor, and allegedly the favourite one.

He had a pleasant personality and a strong physical resemblance to his father. He fought in the wars between his father, the pope, and the Northern Italian communes.

When Ubaldo of Gallura
Ubaldo of Gallura
Ubaldo II Visconti, son of Lamberto di Eldizio and Elena de Lacon, was the Judge of Gallura from 1225 to his death in 1238. He ruled every giudicato on the island of Sardinia at one point or another save Arborea....
died in 1238, the Doria
Doria
Doria, originally de Auria , meaning "the sons of Auria", and then de Oria or d'Oria, is the name of an old and extremely wealthy Genoese family who played a major role in the history of the Republic of Genoa and in Italy, from the 12th century to the 16th century.-Origins:According to legend, a...
family of Genoa
Republic of Genoa
The Most Serene Republic of Genoa |Ligurian]]: Repúbrica de Zêna) was an independent state from 1005 to 1797 in Liguria on the northwestern Italian coast, as well as Corsica from 1347 to 1768, and numerous other territories throughout the Mediterranean....
, in order to secure the Giudicato of Logudoro from Pisan domination
Republic of Pisa
The Republic of Pisa was a de facto independent state centered on the Tuscan city of Pisa during the late tenth and eleventh centuries. It rose to become an economic powerhouse, a commercial center whose merchants dominated Mediterranean and Italian trade for a century before being surpassed and...
, convinced the emperor to marry Enzio to Ubaldo's widow, Adelasia of Torres
Adelasia of Torres
Adelasia , eldest child of Marianus II of Logudoro by Agnes of Massa, daughter of William I of Cagliari, and successor of her brother, Barisone III, in 1236, was the Judge of Logudoro from 1236 and Judge of Gallura from 1238....
. By marrying her, Enzio would accede to half of the island of Sardinia
Sardinia
Sardinia is the second-largest island in the Mediterranean Sea . It is an autonomous region of Italy, and the nearest land masses are the French island of Corsica, the Italian Peninsula, Sicily, Tunisia and the Spanish Balearic Islands.The name Sardinia is from the pre-Roman noun *sard[],...
jure uxoris. He was created a knight in Cremona
Cremona
Cremona is a city and comune in northern Italy, situated in Lombardy, on the left bank of the Po River in the middle of the Pianura Padana . It is the capital of the province of Cremona and the seat of the local City and Province governments...
and granted the title "King of Sardinia". He travelled to the island to marry Adelasia in October that year.

In July 1239, he was assigned as imperial
Holy Roman Empire
The Holy Roman Empire was a realm that existed from 962 to 1806 in Central Europe.It was ruled by the Holy Roman Emperor. Its character changed during the Middle Ages and the Early Modern period, when the power of the emperor gradually weakened in favour of the princes...
vicar general
Vicar general
A vicar general is the principal deputy of the bishop of a diocese for the exercise of administrative authority. As vicar of the bishop, the vicar general exercises the bishop's ordinary executive power over the entire diocese and, thus, is the highest official in a diocese or other particular...
in Lombardy
Lombardy
Lombardy is one of the 20 regions of Italy. The capital is Milan. One-sixth of Italy's population lives in Lombardy and about one fifth of Italy's GDP is produced in this region, making it the most populous and richest region in the country and one of the richest in the whole of Europe...
, as well as General-Legate in Romagna
Romagna
Romagna is an Italian historical region that approximately corresponds to the south-eastern portion of present-day Emilia-Romagna. Traditionally, it is limited by the Apennines to the south-west, the Adriatic to the east, and the rivers Reno and Sillaro to the north and west...
, and left Sardinia never to return. In 1241, he took part in the capture of a papal fleet at Giglio Island
Giglio Island
Isola del Giglio is an island and Italian comune situated in the Tyrrhenian Sea, off the coast of Tuscany, part of the Province of Grosseto.-Geography:...
in the Tyrrhenian Sea
Tyrrhenian Sea
The Tyrrhenian Sea is part of the Mediterranean Sea off the western coast of Italy.-Geography:The sea is bounded by Corsica and Sardinia , Tuscany, Lazio, Campania, Basilicata and Calabria and Sicily ....
. His first successful move as military leader was the reconquest of Jesi
Jesi
thumb|250px|Teatro Pergolesi.Iesi is a town and comune of the province of Ancona in the Marche, Italy.It is an important industrial and artistic center in the floodplain on the left bank of the Esino river before its mouth on the Adriatic Sea.-History:Iesi was one of the last towns of the Umbri...
, in the Marche
Marche
The population density in the region is below the national average. In 2008, it was 161.5 inhabitants per km2, compared to the national figure of 198.8. It is highest in the province of Ancona , and lowest in the province of Macerata...
, which was Frederick's birthplace. Later he was captured in a skirmish against the Milanese at Gorgonzola
Gorgonzola
Gorgonzola is a comune in the province of Milan, part of Lombardy, northern Italy. Once a rural community, and famous for the cheese which bears its name, today it forms part of the Milanese conurbation and has three stops on the Milan Metro.- History :...
, but soon released. In 1245 or 1246 his marriage was annulled. In 1247, he took part in the unsuccessful siege of Parma
Parma
Parma is a city in the Italian region of Emilia-Romagna famous for its ham, its cheese, its architecture and the fine countryside around it. This is the home of the University of Parma, one of the oldest universities in the world....
.

He continued to fight the Guelph Lombards, assaulting the Guelphs of Reggio
Reggio Emilia
Reggio Emilia is an affluent city in northern Italy, in the Emilia-Romagna region. It has about 170,000 inhabitants and is the main comune of the Province of Reggio Emilia....
and conducting an assault in the surroundings of Parma.

During a campaign to support the Ghibelline cities of Modena
Modena
Modena is a city and comune on the south side of the Po Valley, in the Province of Modena in the Emilia-Romagna region of Italy....
and Cremona against Guelph
Guelphs and Ghibellines
The Guelphs and Ghibellines were factions supporting the Pope and the Holy Roman Emperor, respectively, in central and northern Italy. During the 12th and 13th centuries, the split between these two parties was a particularly important aspect of the internal policy of the Italian city-states...
Bologna
Bologna
Bologna is the capital city of Emilia-Romagna, in the Po Valley of Northern Italy. The city lies between the Po River and the Apennine Mountains, more specifically, between the Reno River and the Savena River. Bologna is a lively and cosmopolitan Italian college city, with spectacular history,...
, he was defeated and captured on 26 May 1249 at the Battle of Fossalta
Battle of Fossalta
The Battle of Fossalta is an en episode of the War of the Guelphs and Ghibellines in northern Italy. It took place in Fossalta, a small location on the Panaro river, and is especially remembered for the capture of Enzio of Sardinia, son of Emperor Frederick II of Hohenstaufen.In the spring of 1249,...
. Enzio was thenceforth kept prisoner in Bologna, in the palace that came to bear his name
Palazzo Re Enzo
Palazzo Re Enzo is a palace in Bologna, northern Italy. It takes its name from Enzio of Sardinia, Frederick II's son, who was prisoner here from 1249 until his death in 1272....
. Every attempt to escape or to rescue him failed, and he died in prison in 1272: after the murder of Conradin
Conradin
Conrad , called the Younger or the Boy, but usually known by the diminutive Conradin , was the Duke of Swabia , King of Jerusalem , and King of Sicily .-Early childhood:Conradin was born in Wolfstein, Bavaria, to Conrad...
in 1268, he was the last of the Hohenstaufen
Hohenstaufen
The House of Hohenstaufen was a dynasty of German kings in the High Middle Ages, lasting from 1138 to 1254. Three of these kings were also crowned Holy Roman Emperor. In 1194 the Hohenstaufens also became Kings of Sicily...
.

Enzio shared the father's passion for falconry
Falconry
Falconry is "the taking of wild quarry in its natural state and habitat by means of a trained raptor". There are two traditional terms used to describe a person involved in falconry: a falconer flies a falcon; an austringer flies a hawk or an eagle...
, and was thus nicknamed Falconcello ("little falcon"). He was the dedicatee of a French
French language
French is a Romance language spoken as a first language in France, the Romandy region in Switzerland, Wallonia and Brussels in Belgium, Monaco, the regions of Quebec and Acadia in Canada, and by various communities elsewhere. Second-language speakers of French are distributed throughout many parts...
translation of a hunting treatise by Yatrib. Like his brother Manfred
Manfred of Sicily
Manfred was the King of Sicily from 1258 to 1266. He was a natural son of the emperor Frederick II of Hohenstaufen but his mother, Bianca Lancia , is reported by Matthew of Paris to have been married to the emperor while on her deathbed.-Background:Manfred was born in Venosa...
, he presumambly grew fond of poetry at Frederick's court: during his long imprisonment Enzio wrote several poems, and his pitiful fate was itself a source of inspiration for several poets.

The powerful Bentivoglio
Bentivoglio
Bentivoglio was an Italian family of princely rank, long supreme in Bologna and responsible for giving the city its political autonomy during the Renaissance.-History:...
family of Bologna and Ferrara
Ferrara
Ferrara is a city and comune in Emilia-Romagna, northern Italy, capital city of the Province of Ferrara. It is situated 50 km north-northeast of Bologna, on the Po di Volano, a branch channel of the main stream of the Po River, located 5 km north...
claimed descent from him.