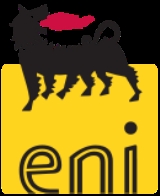 for the village in New Caledonia see Eni, Maré

Eni S.p.A. is an Italian
Italy
Italy , officially the Italian Republic languages]] under the European Charter for Regional or Minority Languages. In each of these, Italy's official name is as follows:;;;;;;;;), is a unitary parliamentary republic in South-Central Europe. To the north it borders France, Switzerland, Austria and...
multinational oil
Petroleum
Petroleum or crude oil is a naturally occurring, flammable liquid consisting of a complex mixture of hydrocarbons of various molecular weights and other liquid organic compounds, that are found in geologic formations beneath the Earth's surface. Petroleum is recovered mostly through oil drilling...
and gas
Natural gas
Natural gas is a naturally occurring gas mixture consisting primarily of methane, typically with 0–20% higher hydrocarbons . It is found associated with other hydrocarbon fuel, in coal beds, as methane clathrates, and is an important fuel source and a major feedstock for fertilizers.Most natural...
company, present in 70 countries, and currently Italy's largest industrial company with a market capitalization
Market capitalization
Market capitalization is a measurement of the value of the ownership interest that shareholders hold in a business enterprise. It is equal to the share price times the number of shares outstanding of a publicly traded company...
of 87.7 billion
1000000000 (number)
1,000,000,000 is the natural number following 999,999,999 and preceding 1,000,000,001.In scientific notation, it is written as 109....
euro
Euro
The euro is the official currency of the eurozone: 17 of the 27 member states of the European Union. It is also the currency used by the Institutions of the European Union. The eurozone consists of Austria, Belgium, Cyprus, Estonia, Finland, France, Germany, Greece, Ireland, Italy, Luxembourg,...
s (US$138 billion), as of July 24, 2008. The Italian government owns a 30% golden share
Golden Share
A Golden Share is a nominal share which is able to outvote all other shares in certain specified circumstances, often held by a government organization, in a government company undergoing the process of privatization and transformation into a stock-company....
in the company, 20% held through the state Treasury
Treasury
A treasury is either*A government department related to finance and taxation.*A place where currency or precious items is/are kept....
and 10% held through the Cassa depositi e prestiti
Cassa depositi e prestiti
Cassa Depositi e Prestiti is an Italian bank founded 1850 in Torino and constituted in its current form as joint-stock company on December 12, 2003...
.

Despite initial postwar plans to break up Agip
Agip
Agip is an Italian automotive gasoline and diesel retailer established in 1926. It is a subsidiary of the multinational petroleum company Eni.In 2003, Eni S.p.A...
, administrator Enrico Mattei
Enrico Mattei
Enrico Mattei was an Italian public administrator. After World War II he was given the task of dismantling the Italian Petroleum Agency Agip, a state enterprise established by the Fascist regime. Instead Mattei enlarged and reorganized it into the National Fuel Trust Ente Nazionale Idrocarburi...
converted it to a state monopoly, renamed Eni. The name derives from the initials of the company's original full title Ente Nazionale Idrocarburi, but is no longer used as an acronym. The Italian Government authorized its establishment on February 10, 1953 in order to implement a national energy strategy based on the concentration of all the activities in the energy sector into one group. Eni was to supply energy to Italy and contribute to the country's industrial development.

The head of Eni, Mattei, a center left politician, had developed cooperation with communist countries, and the import of oil from the Soviet Union became an important part of Eni's operations. At the same time, Eni was involved in a series of high profile political corruption scandals. 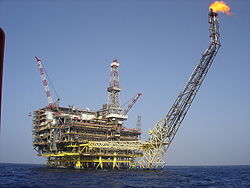 Its crude oil production comes primarily from Libya
Libya
Libya is an African country in the Maghreb region of North Africa bordered by the Mediterranean Sea to the north, Egypt to the east, Sudan to the southeast, Chad and Niger to the south, and Algeria and Tunisia to the west....
, Egypt
Egypt
Egypt , officially the Arab Republic of Egypt, Arabic: , is a country mainly in North Africa, with the Sinai Peninsula forming a land bridge in Southwest Asia. Egypt is thus a transcontinental country, and a major power in Africa, the Mediterranean Basin, the Middle East and the Muslim world...
, Nigeria
Nigeria
Nigeria , officially the Federal Republic of Nigeria, is a federal constitutional republic comprising 36 states and its Federal Capital Territory, Abuja. The country is located in West Africa and shares land borders with the Republic of Benin in the west, Chad and Cameroon in the east, and Niger in...
, the Congo
Democratic Republic of the Congo
The Democratic Republic of the Congo is a state located in Central Africa. It is the second largest country in Africa by area and the eleventh largest in the world...
, the North Sea
North Sea
In the southwest, beyond the Straits of Dover, the North Sea becomes the English Channel connecting to the Atlantic Ocean. In the east, it connects to the Baltic Sea via the Skagerrak and Kattegat, narrow straits that separate Denmark from Norway and Sweden respectively...
, and Angola
Angola
Angola, officially the Republic of Angola , is a country in south-central Africa bordered by Namibia on the south, the Democratic Republic of the Congo on the north, and Zambia on the east; its west coast is on the Atlantic Ocean with Luanda as its capital city...
, with smaller amounts of crude oil production in Tunisia
Tunisia
Tunisia , officially the Tunisian RepublicThe long name of Tunisia in other languages used in the country is: , is the northernmost country in Africa. It is a Maghreb country and is bordered by Algeria to the west, Libya to the southeast, and the Mediterranean Sea to the north and east. Its area...
and in the United States
United States
The United States of America is a federal constitutional republic comprising fifty states and a federal district...
. Eni's China production began in 1992, although it currently amounts to only 1 percent of Eni's total crude oil production.

In 2007, oil and natural gas production for the full year averaged 1.74 millions boe
Barrel of oil equivalent
The barrel of oil equivalent is a unit of energy based on the approximate energy released by burning one barrel of crude oil. The US Internal Revenue Service defines it as equal to 5.8 × 106 BTU...
per day, making Eni Europe's third largest refiner, after Royal Dutch Shell
Royal Dutch Shell
Royal Dutch Shell plc , commonly known as Shell, is a global oil and gas company headquartered in The Hague, Netherlands and with its registered office in London, United Kingdom. It is the fifth-largest company in the world according to a composite measure by Forbes magazine and one of the six...
and Total S.A.
Total S.A.
Total S.A. is a French multinational oil company and one of the six "Supermajor" oil companies in the world.Its businesses cover the entire oil and gas chain, from crude oil and natural gas exploration and production to power generation, transportation, refining, petroleum product marketing, and...
.

Eni carried out several hydrocarbon discoveries in recent years; the main discoveries were made in: Angola, Brazil, Congo, Egypt, Indonesia, Nigeria, Norway, Pakistan, Scotland, the Gulf of Mexico and Alaska. In 2007, a total of 81 new exploratory wells were drilled (43.5 of which represented Eni's share). Moreover, the company acquired oil and gas assets in the Gulf of Mexico from Dominion Resources
Dominion Resources
Dominion Resources Inc. , commonly referred to as Dominion, is a power and energy company headquartered in Richmond, Virginia that supplies electricity in parts of Virginia and North Carolina and supplies natural gas to parts of West Virginia, Ohio, Pennsylvania, and eastern North Carolina...
and in onshore Congo from Maurel & Prom with total expenditures amounting to €4.52 billion.

In January 2010 a consortium led by Eni was awarded a license to develop the Zubair field, one of the largest oil fields in Iraq.

Eni operates in the supply, transport, distribution and sale of natural gas. Gas sales reached 99 billion cubic meters in 2007.
In June 2008 the company bought a 57% stake in Distrigas
Distrigas
Distrigas is a natural gas company based in Belgium. It is a subsidiary of the Italian energy company Eni. In addition to Belgium, the company operates also in France, the Netherlands and Germany.-History:...
, a Belgian company that supplies natural gas to industries, resellers and electricity producers. In March 2009 it bought the remaining 43%.

In December 2010, Eni entered into the shale gas
Shale gas
Shale gas is natural gas produced from shale. Shale gas has become an increasingly important source of natural gas in the United States over the past decade, and interest has spread to potential gas shales in the rest of the world...
exploration market by acquiring Minsk Energy Resources owning three licences in the Polish Baltic basin.

Eni's electricity generation sites in Italy, as of January 2010, are the following:

Natural Gas
Natural gas
Natural gas is a naturally occurring gas mixture consisting primarily of methane, typically with 0–20% higher hydrocarbons . It is found associated with other hydrocarbon fuel, in coal beds, as methane clathrates, and is an important fuel source and a major feedstock for fertilizers.Most natural...
Power Plants

Eni operates in engineering, oilfield services and construction both offshore and onshore through Saipem
Saipem
Saipem S.p.A. is an Italian oil and gas industry contractor. It is a subsidiary of Italian energy company Eni, which owns approximately 43% of Saipem's shares. Saipem has contracted for designing and constructing several pipelines, including Blue Stream, Greenstream, Nord Stream and South...
, a subsidiary listed on the Italian Stock Exchange (Eni's interest is 43%).

Activist asset manager Knight Vinke
Knight Vinke Asset Management
Knight Vinke is a highly focused and research driven institutional asset manager with particular expertise in energy and financial services....
, which owns 1% of the outstanding shares of the company, in October 2009 has begun pressing Eni's management to operate a spin off of Eni’s gas activities.
In its opinion this would solve the undervaluation of the company and release up to 50 billion euros ($70bn) of hidden value.

In 2009, the European Commission filed formal antitrust charges against Eni. The commission believes that Eni has conspired to keep competitors from using its gas pipelines.

In 2009 again, according to the WikiLeaks cables, US ambassador Lanier told Washington that bribery allegations were made in Uganda by Eni which at the time was in competition for oil assets in the country against Tullow Oil. The bribes were taken by the newly appointed Ugandan prime minister, Amama Mbabazi.