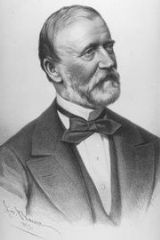 Encyclopedia
The Engerth locomotive was a type of early articulated
Articulated locomotive
Articulated locomotive usually means a steam locomotive with one or more engine units which can move independent of the main frame. This is done to allow a longer locomotive to negotiate tighter curves...
steam locomotive
Steam locomotive
A steam locomotive is a railway locomotive that produces its power through a steam engine. These locomotives are fueled by burning some combustible material, usually coal, wood or oil, to produce steam in a boiler, which drives the steam engine...
designed by Wilhelm Freiherr von Engerth  for use on the Semmering Railway
Semmering Railway
The Semmering railway, Austria, which starts at Gloggnitz and leads over the Semmering to Mürzzuschlag was the first mountain railway in Europe built with a standard gauge track. It is commonly referred to as the world's first true mountain railway, given the very difficult terrain and the...
in Austria. 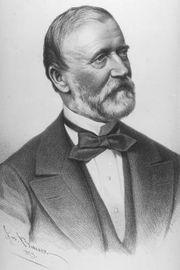 Wilhelm von Engerth was born in Pless, Upper Silesia
Upper Silesia
Upper Silesia is the southeastern part of the historical and geographical region of Silesia. Since the 9th century, Upper Silesia has been part of Greater Moravia, the Duchy of Bohemia, the Piast Kingdom of Poland, again of the Lands of the Bohemian Crown and the Holy Roman Empire, as well as of...
(Now Pszczyna, Poland) on 26 May 1814, the brother of the artist Edouard von Engerth. Initially, he studied architecture, but in 1834 he took up mechanical engineering as a profession. By the late 1850s he was the General Manager of the Imperial Austrian State Railways
Imperial Austrian State Railways
The Imperial Royal State Railways was the state railway organisation in the Cisleithanian part of Austria-Hungary.-Early history:...
. Von Engerth was created a Baron
Baron
Baron is a title of nobility. The word baron comes from Old French baron, itself from Old High German and Latin baro meaning " man, warrior"; it merged with cognate Old English beorn meaning "nobleman"...
(Freiherr
Freiherr
The German titles Freiherr and Freifrau and Freiin are titles of nobility, used preceding a person's given name or, after 1919, before the surname...
) in 1875, and he died on 4 September 1884 in Leesdorf.

The Semmering Railway
Semmering Railway
The Semmering railway, Austria, which starts at Gloggnitz and leads over the Semmering to Mürzzuschlag was the first mountain railway in Europe built with a standard gauge track. It is commonly referred to as the world's first true mountain railway, given the very difficult terrain and the...
, opened on 17 July 1854, was one of the first true mountain railway
Mountain railway
A mountain railway is a railway that ascends and descends a mountain slope that has a steep grade. Such railways can use a number of different technologies to overcome the steepness of the grade...
s, traversing a section of the Austrian Alps
Alps
The Alps is one of the great mountain range systems of Europe, stretching from Austria and Slovenia in the east through Italy, Switzerland, Liechtenstein and Germany to France in the west....
. It was characterized by steep gradients and sharp curves. To work this railway a new design of locomotive was developed. 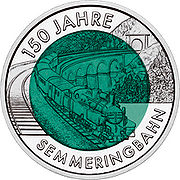 A competition was held to decide which locomotives would be bought for operation on the Semmering Railway. One stretch of the line had gradients of 1 in 40 (2.5%) and curves with a minimum radius of 190 metres (207.8 yd) and a maximum radius of 285 metres (311.7 yd). A speed of 11.5 kilometres per hour (7.1 mph) was required to be maintained and a maximum axle loading of 14 tonnes, with a boiler pressure not exceeding 8.5 kgf/cm² (830 kPa). There were four entrants, Bavaria, built by Maffei; Weiner-Neustadt built by Weiner-Neustadt; Seraing built by Société anonyme John Cockerill in Belgium and Vindobona built by the Glognitz Bahn in Vienna
Vienna
Vienna is the capital and largest city of the Republic of Austria and one of the nine states of Austria. Vienna is Austria's primary city, with a population of about 1.723 million , and is by far the largest city in Austria, as well as its cultural, economic, and political centre...
. All four locomotives fulfilled the conditions of the trial, but did not prove reliable in practice. The Semmering Trials lead to a number of developments in locomotive design:- Fairlie
Fairlie
A Fairlie is a type of articulated steam locomotive that has the driving wheels on bogies. The locomotive may be double-ended or single ended...
's Patent of 1863, The Meyer locomotive
Meyer locomotive
A Meyer locomotive is a type of articulated locomotive. The design was never as popular as the Garratt or Mallet locomotives. It can be best regarded as 19th Century competition for the early compound Mallet and also the Fairlie articulated designs....
and the Mallet locomotive
Mallet locomotive
The Mallet Locomotive is a type of articulated locomotive, invented by a Swiss engineer named Anatole Mallet ....
.

The Engerth design articulated the tender
Tender locomotive
A tender or coal-car is a special rail vehicle hauled by a steam locomotive containing the locomotive's fuel and water. Steam locomotives consume large quantities of water compared to the quantity of fuel, so tenders are necessary to keep the locomotive running over long distances. A locomotive...
with the main locomotive frame, allowing some of the weight of the fuel and water to be carried on the driving wheel
Driving wheel
On a steam locomotive, a driving wheel is a powered wheel which is driven by the locomotive's pistons...
s to improve adhesion
Rail adhesion
The term adhesion railway or adhesion traction describes the most common type of railway, where power is applied by driving some or all of the wheels of the locomotive. Thus, it relies on the friction between a steel wheel and a steel rail. Note that steam locomotives of old were driven only by...
. Because the tender was articulated, rather than directly attached to the frame, the locomotive could traverse relatively sharp curves, while still enjoying the advantage of the additional adhesive weight gain. The original design also included an indirect drive from the main driving wheels to the wheels under the tender. This arrangement proved too complex to maintain and was dropped from the design.

One example of the Engerth type is preserved at the Swiss Transport Museum
Swiss Transport Museum
The Swiss Transport Museum or Verkehrshaus der Schweiz, in Lucerne, is a museum, opened in July 1959 and exhibiting all forms of transport as well as communications...
in Lucerne
Lucerne
Lucerne is a city in north-central Switzerland, in the German-speaking portion of that country. Lucerne is the capital of the Canton of Lucerne and the capital of the district of the same name. With a population of about 76,200 people, Lucerne is the most populous city in Central Switzerland, and...
. This locomotive, No.28 Genf an 0-4-6T built by Maschinenfabrik Esslingen
Maschinenfabrik Esslingen
Maschinenfabrik Esslingen , was a German engineering firm that manufactured locomotives, tramways, railway wagons, roll-blocks, technical equipment for the railways, , bridges, steel structures, pumps and boilers.-Founding:...
in 1858 to work the Schweizensche Centraalbahn (Swiss Central Railway). She retired from active service in 1899 and was used as a static boiler at Olten
Olten
Olten is a town in the canton of Solothurn in Switzerland and capital of the district of the same name.Olten's railway station is within 30 minutes of Zurich, Bern, Basel, and Lucerne by train, and is a rail hub of Switzerland.-History:...
. She is the oldest locomotive in Switzerland.

Buštěhradská dráha (Buštěhrad
Buštehrad
Buštěhrad is a small town in Central Bohemian Region of the Czech Republic. It is located 20 km northwest of Prague and has a population of 2,295 .- External links :*...
Railway) locomotive 103 Kladno is preserved in the National Technical Museum
National Museum (Prague)
The National museum is a Czech museum institution intended to systematically establish, prepare and publicly exhibit natural scientific and historical collections. It was founded 1818 in Prague by Kašpar Maria Šternberg...
in Prague
Prague
Prague is the capital and largest city of the Czech Republic. Situated in the north-west of the country on the Vltava river, the city is home to about 1.3 million people, while its metropolitan area is estimated to have a population of over 2.3 million...
, Czech Republic
Czech Republic
The Czech Republic is a landlocked country in Central Europe. The country is bordered by Poland to the northeast, Slovakia to the east, Austria to the south, and Germany to the west and northwest....
.

All six of the narrow gauge NÖLB Mh or 399 class Engerth locomotives survive in Austria. These 760mm gauge 0-8+4 (D2h2t) locomotives were built by Krauss for the Mariazellerbahn
Mariazellerbahn
The Mariazell Railway is an electrically operated narrow-gauge railway which connects the Lower Austrian capital Sankt Pölten with the Styrian pilgrimage centre of Mariazell.- Valley Line :...
in 1906 and 1908. When the Mariazellerbahn was electrified the Niederosterreichische Landesbahn (NOLB) transferred them to their Waldviertler Schmalspurbahnen system at Gmund. When the ÖBB
ÖBB
The Austrian Federal Railways is the national railway system of Austria, and the administrators of Liechtenstein's railways...
took over in 1922 the locomotives were redesignated the 399 class.

Mh1 / 399.01 (5431/1906) is part of the ÖBB
ÖBB
The Austrian Federal Railways is the national railway system of Austria, and the administrators of Liechtenstein's railways...
heritage fleet. It is currently based at Gmund ,ÖBB-Erlebnisbahn.

Mh2 / 399.02 (5432/1906) is part of the ÖBB
ÖBB
The Austrian Federal Railways is the national railway system of Austria, and the administrators of Liechtenstein's railways...
heritage fleet. It is currently based at Gmund ,ÖBB-Erlebnisbahn.

Mh4 / 399.04 (5434/1906) is part of the ÖBB
ÖBB
The Austrian Federal Railways is the national railway system of Austria, and the administrators of Liechtenstein's railways...
heritage fleet. It is currently based at Gmund ,ÖBB-Erlebnisbahn.

Mh5 / 399.05 (5924/1908) is privately owned. It is currently based at Heidenreichstein on the Waldviertler Schmalspurbahnverein (WSV)
Mh6 / 399.06 (5925/1908) is preserved on the Mariazellerbahn
Mariazellerbahn
The Mariazell Railway is an electrically operated narrow-gauge railway which connects the Lower Austrian capital Sankt Pölten with the Styrian pilgrimage centre of Mariazell.- Valley Line :...
in Austria.