Encyclopedia
The Semmering railway, Austria
Austria
Austria , officially the Republic of Austria , is a landlocked country of roughly 8.4 million people in Central Europe. It is bordered by the Czech Republic and Germany to the north, Slovakia and Hungary to the east, Slovenia and Italy to the south, and Switzerland and Liechtenstein to the...
, which starts at Gloggnitz
Gloggnitz
Gloggnitz is a mountain town in the Neunkirchen district of Lower Austria, Austria.Gloggnitz is situated in the south-western part of the Vienna Basin in Lower Austria. It is surrounded by the highest mountains in Lower Austria, Mount Rax and Mount Schneeberg...
and leads over the Semmering
Semmering
For the town of the same name, see Semmering, Austria.Semmering is a mountain pass in the Eastern Northern Limestone Alps connecting Lower Austria and Styria, between which it forms a natural border.-Location:...
to Mürzzuschlag
Mürzzuschlag
Mürzzuschlag is a town in northeastern Styria, Austria, the capital of the Mürzzuschlag District. It is located on the Mürz river near the Semmering Pass, the border with the state of Lower Austria, about southwest of Vienna. The population is 8,745...
was the first mountain railway in Europe built with a standard gauge
Standard gauge
The standard gauge is a widely-used track gauge . Approximately 60% of the world's existing railway lines are built to this gauge...
track. It is commonly referred to as the world's first true mountain railway, given the very difficult terrain and the considerable altitude difference that was mastered during its construction. It is still fully functional as a part of the South railway which is oparated by the Austrian Federal Railways.

The Semmering railway was constructed between 1848 and 1854 by some 20,000 workers under the project's designer and director Carl von Ghega. The construction features 14 tunnel
Tunnel
A tunnel is an underground passageway, completely enclosed except for openings for egress, commonly at each end.A tunnel may be for foot or vehicular road traffic, for rail traffic, or for a canal. Some tunnels are aqueducts to supply water for consumption or for hydroelectric stations or are sewers...
s (among them the 1,431 m vertex tunnel), 16 viaduct
Viaduct
A viaduct is a bridge composed of several small spans. The term viaduct is derived from the Latin via for road and ducere to lead something. However, the Ancient Romans did not use that term per se; it is a modern derivation from an analogy with aqueduct. Like the Roman aqueducts, many early...
s (several two-story) and over 100 curved stone bridges as well as 11 small iron bridges. The stations and the buildings for the supervisors were often built directly from the waste material produced in the course of tunnel construction.

Across an overall track length of 41 km the Semmering railway overcomes an altitude difference of 460 m; on 60% of its length the gradient is 20-25‰ (2-2.5%, equivalent to a 1-meter difference in altitude on a 40 m route distance), and 16% exhibit a curvature radius of only 190 m. This was an entirely new technical dimension of railway construction, and new instruments and methods of surveying had to be developed to handle the resulting challenges. Also, new technologies were employed for the Engerth locomotive
Engerth locomotive
The Engerth locomotive was a type of early articulated steam locomotive designed by Wilhelm Freiherr von Engerth for use on the Semmering Railway in Austria.- Designer :...
s because the types in general use at this time could not handle the extreme gradients and turning radii.

Even while being built the Semmering railway was perceived as an effort of "landscape gardening", i.e. it attempted a harmonious combination of technology and nature. The unique travel experience which the Semmering railway offered contributed significantly to the original opening of the Semmering region for tourism. Numerous hotels and mansions are witnesses of this epoch. This enormous upswing to the turn of the century and the revaluation of the region as a winter sports area in the first third of the 20th Century were interrupted first by World War I and then by the changed recreational needs of the population. Therefore this unique culture landscape could be preserved with little change. A trip on the Semmering railway, which is in full use 150 years after its building, still impresses the traveller as a special experience by its varied landscape, the typical style of its mansions and the characteristic sequence of viaducts and tunnel constructions.

In 1998 the Semmering railway was added to the list of the UNESCO World Heritage sites. 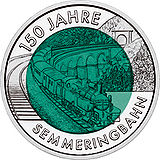 The Railway in numismatics

The Semmering alpine railway has been the main motive for many collector coins and medals. One of the most famous and recent ones is the 150 Years Semmering Alpine Railway Coin. The obverse shows two locomotives
Locomotive
A locomotive is a railway vehicle that provides the motive power for a train. The word originates from the Latin loco – "from a place", ablative of locus, "place" + Medieval Latin motivus, "causing motion", and is a shortened form of the term locomotive engine, first used in the early 19th...
: a historical and a modern one. The reverse of the coin shows a typical Semmering view. An Engerth
Engerth locomotive
The Engerth locomotive was a type of early articulated steam locomotive designed by Wilhelm Freiherr von Engerth for use on the Semmering Railway in Austria.- Designer :...
steam locomotive just emerged from a tunnel crossing one of the distinctive viaducts.