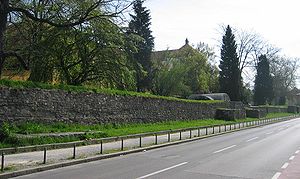 Emona or Aemona, short for Colonia Iulia (A)emona, was a Roman
Ancient Rome
Ancient Rome was a thriving civilization that grew on the Italian Peninsula as early as the 8th century BC. Located along the Mediterranean Sea and centered on the city of Rome, it expanded to one of the largest empires in the ancient world....
castrum  founded in 14-15 AD, possibly by the Legio XV Apollinaris
Legio XV Apollinaris
Legio quinta decima Apollinaris was a Roman legion. It was recruited by Octavian in 41/40 BC. The emblem of this legion was probably a picture of Apollo, or of one of his holy animals....
(theory proposed by the noted historian and epigraphy
Epigraphy
Epigraphy Epigraphy Epigraphy (from the , literally "on-writing", is the study of inscriptions or epigraphs as writing; that is, the science of identifying the graphemes and of classifying their use as to cultural context and date, elucidating their meaning and assessing what conclusions can be...
expert Balduin Saria), on a territory already populated by ancient settlers of uncertain origin. Its location overlaps with the SW part of the old nucleus of the modern city of Ljubljana
Ljubljana
Ljubljana is the capital of Slovenia and its largest city. It is the centre of the City Municipality of Ljubljana. It is located in the centre of the country in the Ljubljana Basin, and is a mid-sized city of some 270,000 inhabitants...
, capital of Slovenia
Slovenia
Slovenia , officially the Republic of Slovenia , is a country in Central and Southeastern Europe touching the Alps and bordering the Mediterranean. Slovenia borders Italy to the west, Croatia to the south and east, Hungary to the northeast, and Austria to the north, and also has a small portion of...
, where numerous remains of Emona can still be seen today (substantial parts of the ancient city walls
Walls
- Other uses :*Wall's , a company that makes ice cream*Wall's sausages, a British sausage brand*Walls, an episode of Power Rangers S.P.D.- Music :*Walls EP, a 2005 album by The Red Paintings*Walls , 2007...
, most of which were destroyed in 1963, several mosaic
Mosaic
Mosaic is the art of creating images with an assemblage of small pieces of colored glass, stone, or other materials. It may be a technique of decorative art, an aspect of interior decoration, or of cultural and spiritual significance as in a cathedral...
s, parts of the paleochristian baptistry, residential houses, statue
Statue
A statue is a sculpture in the round representing a person or persons, an animal, an idea or an event, normally full-length, as opposed to a bust, and at least close to life-size, or larger...
s, tombstones etc.).

(A)emona was, along with Nauportus
Nauportus
Nauportus , ancient Roman town in Pannonia Superior on road from Aquileia to Emona with port at Nauportus river what is now Ljubljanica River....
, Celeia and Poetovio, one of the main cities on the eastern coast of the Adriatic. Formerly, it was assumed to have been a part of the Roman province
Province
A province is a territorial unit, almost always an administrative division, within a country or state.-Etymology:The English word "province" is attested since about 1330 and derives from the 13th-century Old French "province," which itself comes from the Latin word "provincia," which referred to...
of Pannonia
Pannonia
Pannonia was an ancient province of the Roman Empire bounded north and east by the Danube, coterminous westward with Noricum and upper Italy, and southward with Dalmatia and upper Moesia....
. However, recent research seems to indicate that Aemona was actually the easternmost city of the Roman administrative area of Italy.

In 452, (A)emona was virtually destroyed by the Huns
Huns
The Huns were a group of nomadic people who, appearing from east of the Volga River, migrated into Europe c. AD 370 and established the vast Hunnic Empire there. Since de Guignes linked them with the Xiongnu, who had been northern neighbours of China 300 years prior to the emergence of the Huns,...
, led by Attila. Its remaining inhabitants fled the city; some of them made it to the coast of Istria
Istria
Istria , formerly Histria , is the largest peninsula in the Adriatic Sea. The peninsula is located at the head of the Adriatic between the Gulf of Trieste and the Bay of Kvarner...
where they founded a "second Emona", Aemonia, now the town of Novigrad (meaning "New City"), in Croatia
Croatia
Croatia , officially the Republic of Croatia , is a unitary democratic parliamentary republic in Europe at the crossroads of the Mitteleuropa, the Balkans, and the Mediterranean. Its capital and largest city is Zagreb. The country is divided into 20 counties and the city of Zagreb. Croatia covers ...
.

Roman campaigns in Illyricum
Illyria
In classical antiquity, Illyria was a region in the western part of the Balkan Peninsula inhabited by the Illyrians....
from C.E. 6 to 9 involved a series of arduous campaigns. Land was commonly given to veterans on completion of service. Augustus
Augustus
Augustus ;23 September 63 BC – 19 August AD 14) is considered the first emperor of the Roman Empire, which he ruled alone from 27 BC until his death in 14 AD.The dates of his rule are contemporary dates; Augustus lived under two calendars, the Roman Republican until 45 BC, and the Julian...
had made many large-scale land grants in Italy forcing the government to look to frontier provinces for compensation to military veterans. Emona was likely a colony founded by veterans of the Illyricum campaigns. The soldiers were not happy with the quality of these non-Italian land payments and rebelled shortly after the founding of the colony in 14.

According to Herodotus
Herodotus
Herodotus was an ancient Greek historian who was born in Halicarnassus, Caria and lived in the 5th century BC . He has been called the "Father of History", and was the first historian known to collect his materials systematically, test their accuracy to a certain extent and arrange them in a...
, Emona was founded by Jason
Jason
Jason was a late ancient Greek mythological hero from the late 10th Century BC, famous as the leader of the Argonauts and their quest for the Golden Fleece. He was the son of Aeson, the rightful king of Iolcus...
and named by him, in honour of his Thessalian homeland.

According to the 18th century historian Janez Gregor Dolničar, the original predecessor of Emona was founded cca 1222 BC. (The date, although based on legend and poetic speculation
Speculation
In finance, speculation is a financial action that does not promise safety of the initial investment along with the return on the principal sum...
, actually fits in both with Herodotus' account and the date of the earliest archeological remains found so far.)

Emona is the setting of a popular novel by Mira Mihelič
Mira Mihelic
Mira Mihelič, also known as Mira Kramer Puc was a Slovene writer and translator.-Biography:Mira Mihelič was born in Split on 14.julij 1912, then Austria-Hungary as Mira Kramer. She went to school in Ljubljana and studied law for a while...
, Tujec v Emoni, Ljubljana, 1978..

Emona is also the city that Elizabeth Kostova
Elizabeth Kostova
Elizabeth Johnson Kostova is an American author best known for her debut novel The Historian.-Early life:Elizabeth Z. Johnson was born in New London, Connecticut and raised in Knoxville, Tennessee where she graduated from the Webb School of Knoxville...
's protagonist first travels to in the 2005 novel The Historian
The Historian
The Historian interweaves the history and folklore of Vlad Ţepeş, a 15th-century prince of Wallachia known as "Vlad the Impaler", and his fictional equivalent Count Dracula together with the story of Paul, a professor; his 16-year-old daughter; and their quest for Vlad's tomb...
.